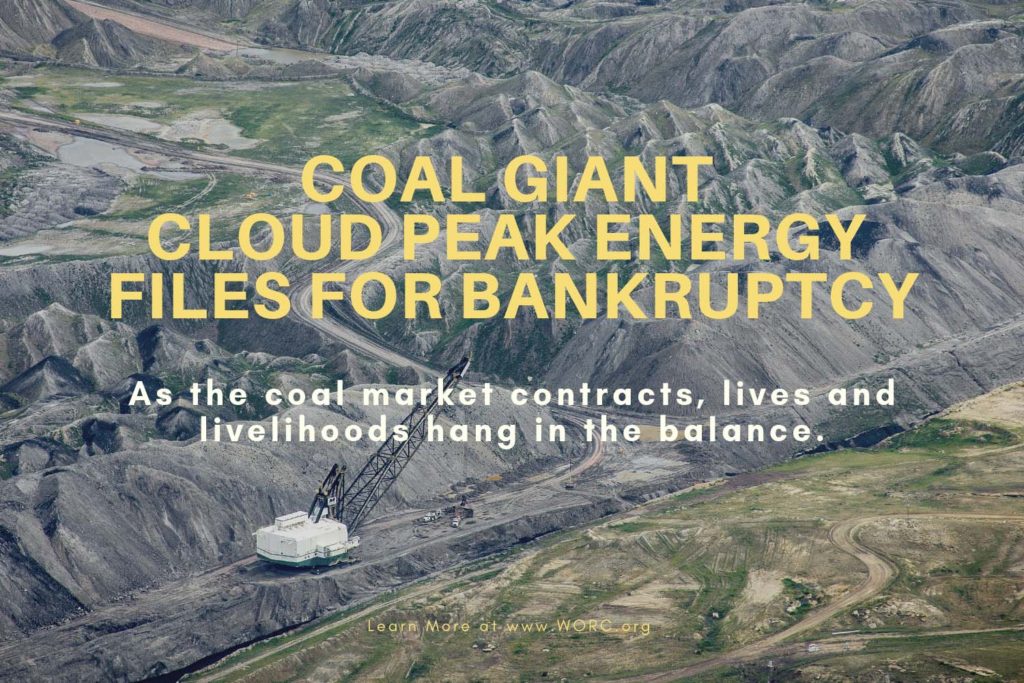 As the coal market contracts, lives and livelihoods hang in the balance.

On Friday, May 10, Cloud Peak Energy filed for bankruptcy protection in Delaware federal court. Unfavorable market pressures have brought low another of the country’s top coal mining companies, and the effects will rock Wyoming and Montana coalfield communities.

There was plenty of warning that Cloud Peak was on the brink, with repeated announcements that the company was headed for a major transition, either bankruptcy, a sale of the company’s assets, or an out-of-court restructuring of the company’s $635 million debt.

Recent signs included the March 15 filing of an ominous annual investor disclosure. Amid the company’s mounting problems — low demand for its coal, operational issues at its mines, and a flagging coal export market — the company announced that its ability to borrow money had almost entirely withered and one of its operating mines could no longer make money. Subsequently, Cloud Peak’s shares were delisted from the New York Stock Exchange.

As a result, Cloud Peak announced that it would forgo making two payments to its bondholders topping $18 million, choosing instead to exercise customary 30-day grace periods. Nearly identical circumstances preceded the bankruptcies of Arch Coal and Peabody Energy, two of the nation’s largest coal companies that both operate sizeable strip mines in the Powder River Basin of Wyoming and Montana.

There was plenty of warning that Cloud Peak was on the brink, with repeated announcements that the company was headed for a major transition, either bankruptcy, a sale of the company’s assets, or an out-of-court restructuring of the company’s $635 million debt.

The Powder River Basin produces 40% of the nation’s coal and serves about 130 coal plants that stretch from Minnesota to Texas, which are closing more quickly than many analysts expected. Cloud Peak, the nation’s fourth-largest coal company, is the only U.S. coal company whose operations are solely located in the basin, and the company’s bankruptcy heralds common financial challenges facing the basin’s mines. The company projects steep losses for nearly every month of 2019 as a result of rising costs and flat or declining coal prices.

Just as the bankruptcy of Arch Coal was accompanied by cancellation of Arch’s plans to build the proposed Otter Creek Mine in southeastern Montana, and the end of the proposed Tongue River Railroad to serve the proposed mine, Cloud Peak’s financial woes appear to mean the end of two of its proposals for new coal mines.

The investment in those mines, the permitted Youngs Creek Mine in northern Wyoming and the Big Metal Mine on the Crow Reservation, were written down by more than $300 million dollars in the March 15 investor disclosure. That figure represented how valuable Cloud Peak considered the projects internally, based on how much money they were expected to produce in the future. The company effectively shelved these projects, saying they do not have the access to capital markets required to pursue them at this time.

Cloud Peak: struggling with the cost of doing business in the current coal market

In part owing to the campaign WORC has waged to shine a spotlight and the need for adequate reclamation bonds for companies approaching and going through bankruptcy, Cloud Peak has had to increase the amount of money set aside to cover its reclamation bonds, and is under further pressure to do so.

Cloud Peak covers its mine clean-up obligations with surety bonds. That means it pays insurance-related companies to guarantee funds for reclamation to the states of Wyoming and Montana. As Cloud Peak’s financial difficulties mounted, the surety bond companies have required more collateral. With zero borrowing ability, Cloud Peak has begun tying up its dwindling cash to maintain its reclamation bond coverage.

With the ongoing cash bleed from the company’s money-losing business, the increased demand of its cash on hand hits at a vulnerable moment and is a likely a major factor leading to the bankruptcy filing. Filing for bankruptcy, rather than draining funds from bonding, also reflects management’s recognition that they would not be able to keep operating if they began shirking their obligation to carry adequate bond.

Bankruptcy does not mean a company simply ceases operation–far from it. Bankruptcy is designed as an escape hatch for a company in financial trouble.

Bankruptcy does not mean a company simply ceases operation–far from it. Bankruptcy is designed as an escape hatch for a company in financial trouble. It is an orderly legal process that allows big companies to “restructure” their operations. This often means that the company’s creditors become the new owners of the company that couldn’t pay its debts to them. It also means that the promises made to workers, retirees, unpaid vendors and suppliers, and county governments owed back-taxes may not be fulfilled. This has cascading effects throughout coal communities.

Cloud Peak’s workforce is not represented by any union. This makes it very difficult for workers to influence the outcome of bankruptcy proceedings. Unionized workers have a much stronger voice on the job and a measure of security from a collectively-bargained contract. In fact, Cloud Peak already took advantage of its non-unionized workforce by ending medical benefits for company retirees at the end of 2018. Anne Zollinger, a recent retiree from a 20-year coal mining career including at Cloud Peak Energy, told the Gillette News Record, “It’s not a way to treat people who have worked hard for your company for years and years.” She lamented, “The big dog gets theirs and the little dog gets none.”

Even where workers are organized, the outcome can be grim. The bankruptcy judge in the recent Westmoreland Coal Company case allowed the company to reject the terms of the collective bargaining agreements with current employees and drop the pension and medical benefits owed to retirees.

“It’s not a way to treat people who have worked hard for your company for years and years. The big dog gets theirs and the little dog gets none.”

Debts to vendors and suppliers of bankrupt coal companies often remain unpaid. The best-case scenario is often negligible payments spread out over the course of several years. County and local governments must sometimes hire bankruptcy attorneys to fight in court to compel bankrupt companies to pay delinquent taxes, especially in the state of Wyoming. This results in a shortfall in money for schools and roads.Powder River Basin Resource Council recently investigated the problem of tax delinquencies by fossil fuel extraction companies in a report titled, “Ad Valorem Taxes in Wyoming: Proposed Improvements.” The report and resulting grassroots advocacy pushed willing elected officials to introduce and pass Senate File 118 through the Wyoming Legislature in the 2019 session to address the issue by bringing counties to the front of the line for payment. This new law will not help if Cloud Peak Energy does not pay delinquent taxes, as the law is not effective until 2021. The law will, however, protect coal communities as more coal-fired electrical plants close across the midwest in coming years.

Since the commencement of Cloud Peak’s  “strategic review” in 2018 in an attempt to sell its mines and avoid bankruptcy, speculation has grown of the company’s instability. After missing its interest payment in March, bankruptcy was all but certain. Cloud Peak’s executives and creditors will have significant influence over the trajectory of the bankruptcy proceedings. They will have to answer big questions about the future  of Cloud Peak’s workforce, suppliers, and community. WORC network leaders and staff will be watching the situation closely to stand up for the interests of coalfield residents.