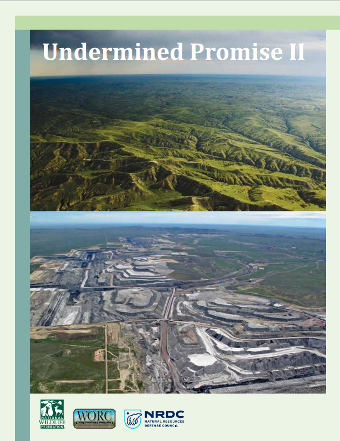 In June, WORC released a new report covering the need for greater oversight and enforcement in order to protect large tracts of strip mined land that has been surface mined in Western states.

Undermined Promise II found that reclamation bonds that coal companies are required to post under federal law may outstrip the industry’s financial resources. Out of a total of 450 square miles of mined land across Wyoming, Montana and North Dakota, only 46 square miles have been reclaimed, spurring concerns that taxpayers will be stuck with a clean-up bill of roughly $2 billion and that Western landscapes, agricultural lands, water and wildlife will be permanently damaged.

The report was produced by WORC in partnership with co-authors from the National Wildlife Federation and the Natural Resources Defense Council. It built on the work of an earlier report published in 2007, Undermined Promise, by WORC and NRDC.  Both reports can be found www.underminedpromise.org.

“Our analysis shows that reclamation is really tardy at mines across the West,” stated Bob LeResche, Sheridan, Wyoming, and Chair of WORC. “It is past time for state and federal regulators to aggressively exercise their authorities to get these lands reclaimed. Timely reclamation work is a win-win for our western communities: it re-opens land for livestock and recreation, it creates good job opportunities, and it minimizes huge risks to the public if a coal company defaults in the future on its bond obligations.”

Undermined Promise II finds that after decades of mining throughout the region, coal companies are not being held accountable for failing to protect and restore lands in the West to their original state. Cleanup costs are climbing; the largest mines have bonds in excess of $300,000,000 apiece. The practice of allowing certain companies under the federal Surface Mining Control and Reclamation Act to self-bond is under fire as the industry’s economic condition grows shakier.

The report makes recommendations to strengthen reclamation and better enforce the law to meet its promise of full reclamation of mined lands to productive uses.