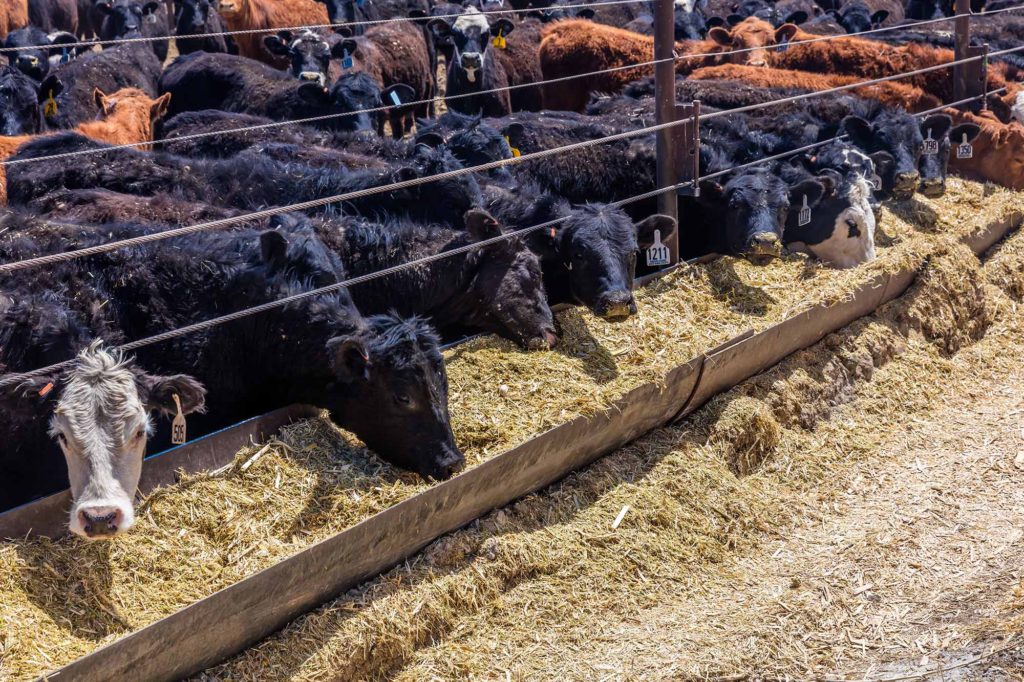 Above: Meatpackers use cattle held in “captive supply” to flood the market when prices get too high, driving independent ranchers out of business and further consolidating the market.

The Biden administration and Congress have an opportunity to restore competitive livestock markets, but they must break meatpackers’ market control.

After decades of grassroots organizing work and in the midst of a global pandemic, the political establishment in D.C. might finally be seeing the light on the need to restore economic justice in the livestock industry. Officials in the Biden Administration, USDA, and Congress are signaling a growing recognition that our agriculture and food system is dysfunctional and fragile, and prioritizes corporate profits ahead of the health and wellbeing of farmers, ranchers, workers, and food consumers. On July 9, 2021, the Biden Administration issued an Executive Order, “Promoting Competition in the American Economy.” The Order “includes 72 initiatives by more than a dozen federal agencies to promptly tackle some of the most pressing competition problems across our economy.” President Biden directs USDA to issue new rules under the Packers & Stockyards Act, define what meat can bear the “Product of USA” label, and increase opportunities for farmers to access fair markets.

Congress has held two hearings this summer on problems in the cattle industry. During a Senate Agriculture Committee hearing on June 23, Dr. Mary Hendrickson from the University of Missouri highlighted the problem, “The power to make decisions about what food is produced, how, where, by whom, and who gets to eat it has become increasingly concentrated in the hands of a few people that are located in transnational agrifood companies.”

Just four corporations, Cargill, JBS, National Beef, and Tyson control 85% of the meat purchasing and packing market.100 years ago, Congress passed the Packers and Stockyards Act to address this same problem of concentrated corporate power. At that time, the situation wasn’t nearly as bad as it is today. In the 1930s, five companies controlled 49% of the market.

Want to stand up against these monopolies and corporate greed? We want to hear from you! Please take this short survey to share with us how you think the Biden Administration should approach these rulemakings and your interest in joining us to make the changes we need.

Today, packers use a variety of anti-competitive practices including captive supplies — cattle they own or control under contracts — to drive prices for producers below the cost of production, effectively putting independent ranchers out of business. . They also leverage their market power to buy up smaller processors, employ deceptive labeling, and fight against the reinstatement of mandatory Country-of-Origin Labeling (COOL). Their power influences the highest levels of government. At the start of the pandemic, while workers were getting sick from COVID-19 outbreaks at the largest plants, packers were urged by public health experts to slow down production and keep people safe. Instead, uncovered emails reveal the North American Meat Institute (the lobbying arm of the packing industry) sent the Trump Administration language for an Executive Order to keep the plants open and “continue their operations to the fullest extent possible.”

Several bills have been introduced in Congress attempting to fix the markets. USDA has announced it will propose new rules to enforce antitrust laws. Independent cattle producers and the groups that represent them are fired up. The federal government has announced $500 million to expand and increase the number of meat and poultry processing facilities in an effort to increase competition. Secretary of Agriculture Tom Vilsack has promised to do more. The Department of Justice is investigating the four largest meatpackers and whether they are practicing anti-competitive behavior. This concentration and lack of competitive markets are not sustainable or healthy. The opportunity to rebuild a system that is resilient, fair, and just is right in front of us.

Corporate concentration has contributed to a food system that is centralized, highly specialized, and brittle. Whether it’s operating as intended or breaking down when one link of the chain fails, this system serves only the corporations that built it. If we look at the production of beef in particular during the pandemic, meatpackers have been making record profits while ranchers struggle to cover their costs. The gap between what beef costs at the grocery store and what ranchers are paid is larger than ever. The average price spread between what processors pay for live cattle and what they charge wholesalers and retailers between 2016 and 2018 was $21 per one hundred pounds. In May of 2020, the spread shot up to $279 per one hundred pounds. Where is that money going? It is going into the pockets of corporate shareholders and CEOs not involved in the hands-on production of food. Meatpackers such as JBS and Tyson continue to report record profits. It’s not only producers who are impacted by meatpacker greed. People who eat food are paying more and workers are being exploited.

Meatpacking workers have been forced to work in unsafe conditions. At the beginning of the pandemic, workers at a Smithfield plant in Sioux Falls, SD suffered an outbreak and were forced to work without masks and other safety measures. The plant eventually shut down after hundreds of cases were reported. OSHA fined Smithfield just $13,494 for “failing to protect employees from exposure to the coronavirus.” The Food and Environment Report Network (FERN) has created a mapping tool tracking COVID-19 outbreaks in the agriculture and food system. To add insult to real injury, in December 2020, seven managers at a Tyson plant in Waterloo, IA, were fired for placing bets on how many of their workers would get COVID-19.

Last summer, grocery-store shelves sat empty. As the food system broke down, the few remaining regional and local meat processors were backed up and continued to struggle to meet demand. These smaller processors are more resilient to market shocks than the large meatpackers. They also give farmers and ranchers a larger cut of the profits and provide far better working conditions than the mega-slaughterhouses. Unfortunately, just like farmers and ranchers themselves, unfair practices by the multinationals have put most of the smaller packers out of business, creating an unstable food system prone to collapsing during shocks.

“Restoring competition” means putting farmers, ranchers, and local meat processors on an even playing field with the multinational corporations. When independent farmers and ranchers have a chance to compete fairly, they stay in the business and build rural economies. When farm and ranch families supply multiple local and regional meat processors, it builds a more resilient food system with higher-quality food and robust innovation based on regional needs. Food workers are safer, better compensated, and have more bargaining power. It’s a healthy food system that works for everyone.

These rules, along with reinstating mandatory Country-of-Origin Labeling and only allowing beef that is born, raised, slaughtered and processed in the U.S. to have the Product of the U.S.A. label, would go a long way toward achieving real price discovery and preventing meatpackers from manipulating the market.

The Biden Administration’s Executive Order, “Promoting Competition in the American Economy” is a good start but is just one small step toward creating a level playing field in the livestock industry.It’s not just about “promoting” competition, it is about “restoring” competition and enforcing the rules preventing anti-competitive practices. It’s important to stop the most egregious practices but there is also a need for bold action to restore competition that levels the playing field by stopping price fixing through captive supplies.

The P&SA Act is due for a major update. Sec. Vilsack has promised to address this and has talked about things being different today than during the Obama Administration when bold rules were introduced but were weakened during the rulemaking process. The corporate meatpacking lobby, National Cattlemen’s Beef Association (NCBA), and others lobbied aggressively to maintain the status quo and prevent independent livestock producers from having protections.

Although the new rules haven’t been released yet, here is what the Biden Administration included in the Promoting Competition Executive Order:

The next few months are going to be our best shot at getting independent farmers and ranchers a fair and level playing field with the multinationals. We expect USDA to issue their proposed Packers and Stockyards Act rules in the coming months. For the first time in a generation, there’s momentum to restore competition. With an open public comment period, we all have an opportunity to help get strong rules across the finish line.

We want to hear from you! Please share with us how you think the Biden Administration should approach these rulemakings and your interest in joining us to make the changes we need.

Take Survey
If you find this article valuable, share it with your network.

There is a Solution for Cattle Markets