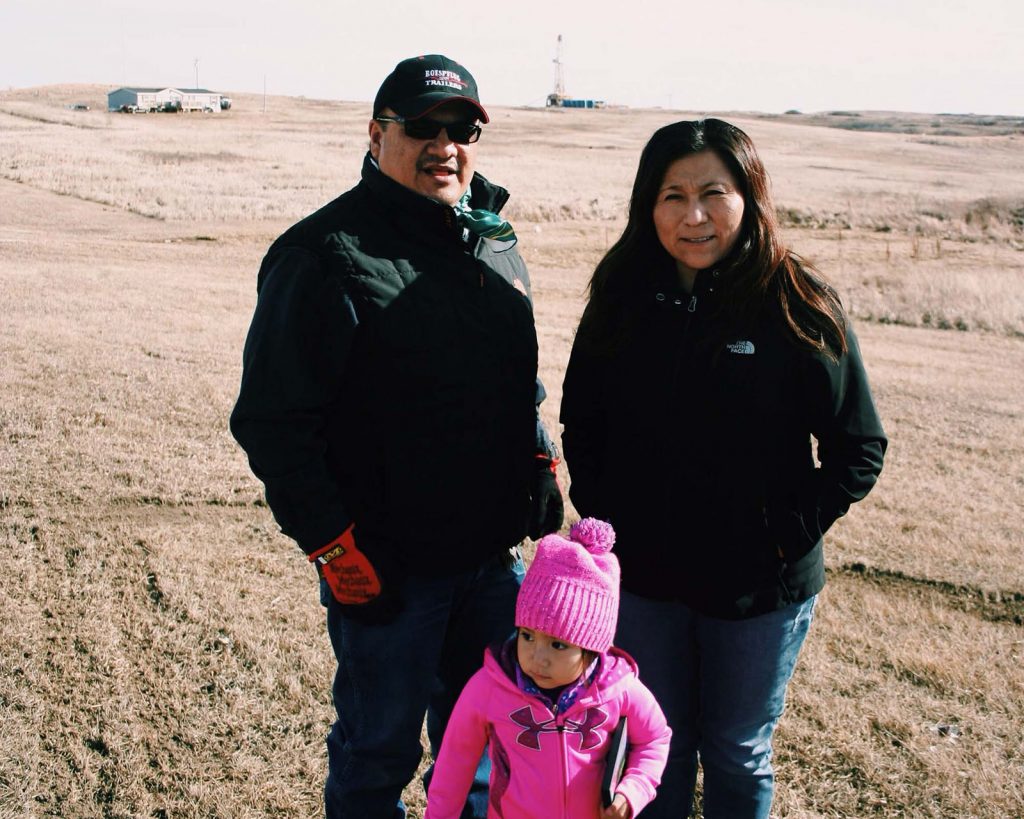 Above: the DeVille family stands near one of the many oil drilling rigs operating on the Fort Berthold Reservation in North Dakota. Their community has experienced several pipeline spills in the last few years.

Lisa DeVille strongly opposes the Keystone XL pipeline because she’s personally seen what pipelines can do when they malfunction.

My name is Lisa DeVille. My Indigenous name in white mans’ language is, “Accomplishes Everything.” I am an enrolled member of the Mandan, Hidatsa, and Arikara Nations, living with my family in Mandaree on the Fort Berthold Reservation in North Dakota. Every day, we witness the environmental, health, and social impacts of living on the front lines of oil and gas extraction. We are losing our way of life because we are allowing Mother Earth to be killed as pipelines are dug into the earth as if they are her blood veins. At least 18 pipelines cross under Lake Sakakawea. I strongly oppose Keystone XL pipeline because I have seen up close and personal what pipelines can do when they malfunction.

Late on the evening of October, 29th the Keystone 1 pipeline in Northeast North Dakota began to spill more than 383,000 gallons of tar sands oil into nearby wetlands. The 1,500 foot long and 15 foot wide spill will permanently damage wetlands — which act as kidneys of the Earth — that clean water and serve as critical habitat to migratory water birds such as Canada geese, upland sandpipers, and the American bittern. This is the 42nd documented time we have seen the Keystone 1 pipeline leak in North America.

On that same cold October evening, at the US State Department’s only hearing on the newest Environmental Impact Statement for the proposed Keystone XL pipeline, I shared a dire message with the crowd at a sub-freezing rally: no oil and gas pipeline is safe. Mandaree, my community, was subjected to one of the biggest oil and gas saltwater spills in North Dakota history. Saltwater produced from oil and gas operations is typically 10-30 times saltier than the ocean and may contain petroleum and residue from hydraulic fracturing.

In July of 2014, a pipeline operated by Crestwood Midstream Services Inc. broke and spilled one million gallons of produced water just uphill of Bear Den Bay and our drinking water intake. Not too long after, in August 2014, another Crestwood pipeline broke and spilled 250,000 gallons in Independence area east of Mandaree near Lake Sakakawea. Crestwood was not held accountable, nor were they fined. Pipelines continue to spill in Mandaree area, and the grasses, shrubs, and trees stand dead around those 2014 pipeline spills, as the salt contamination continues to spread.

The proposed Keystone XL pipeline would be placed just downstream of the Ft. Peck Dam, which occasionally releases torrents of water down the Missouri, and just upstream of the water intake for the Assiniboine & Sioux Rural Water Supply System, which will soon serve more than 30,000 in native and rural communities across Montana. What spills into Missouri River upstream, flows down-stream, jeopardizing drinking water for all nations along the Missouri. My ancestors lived on the Missouri for many years before we were put on reservations. Oil and gas industry can leave when they want. We will live with the aftermath.

My ancestors lived on the Missouri for many years before we were put on reservations. Oil and gas industry can leave when they want. We will live with the aftermath.

After being shut down by the federal government for more than a week, TC Energy has resumed operation of their frequently leaking tar sands pipeline. We cannot afford another, larger, version of this flawed pipeline. We must honor our original instruction as Indigenous people of this land, to honor and protect all life with in their so-called boundaries.

Lisa DeVille is an enrolled member of the Mandan, Hidatsa, and Arikara Nation, also known as the Three Affiliated Tribes, on the Fort Berthold Reservation in North Dakota. She has lived her whole life in Mandaree, ND with her husband, five children, and five grandbabies. Lisa assisted in creating grassroots group Fort Berthold Protectors of Water and Earth Rights (POWER) and is a member of the Dakota Resource Council (DRC).