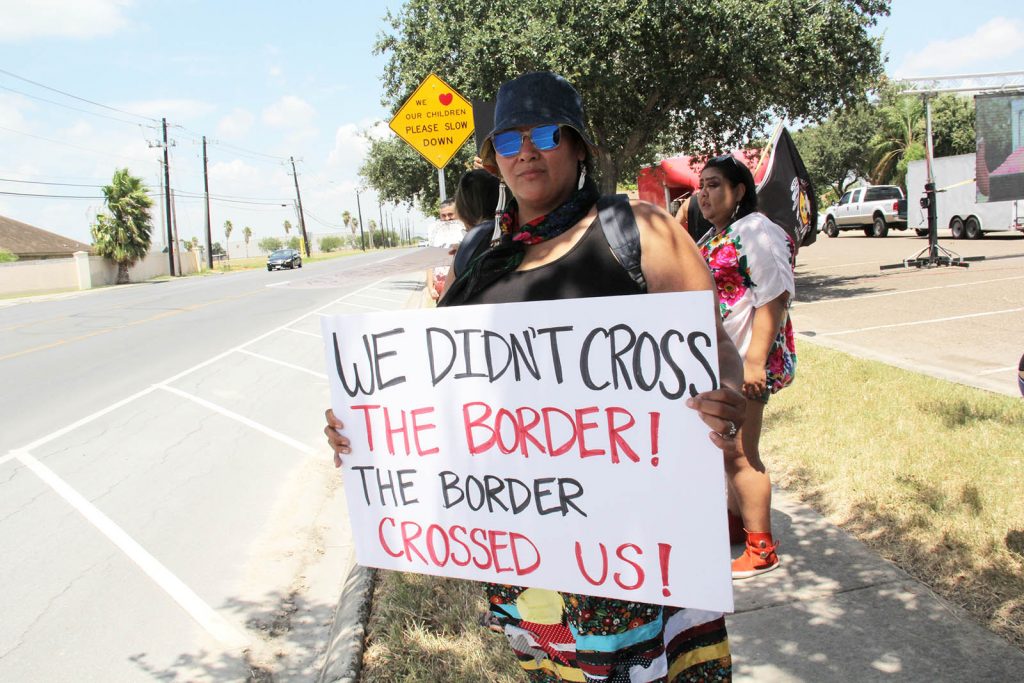 Western Native Voice (WNV) staff and members attended the 2019 Native Voice Network (NVN) meeting and protest in McAllen, Texas, July 25-27th. The NVN chose to hold this gathering in Texas to support the hard work of long-time NVN Member Juan Mancias, Chair of the Carrizo/Comecrudo Nation, as they fight against the border wall construction, the separation of families, and the many inhumane migrant detention facilities in the United States.

The network event hosted individuals from New Mexico to Alaska, and from the east coast, west coast, to third coast. The event featured various panels and speakers including Mark Trahant from Indian Country Today speaking on the 2020 election and national Native political landscape. Another panel focused on the 2020 Census with national and network experts sharing tools and resources for contributing to an accurate count for communities. The meeting wrapped up with a session on direct action and the plans the following day for visiting the National Butterfly Center and Beyond the Border protest located near the Ursula Detention Center.

Revolt of the Butterflies

The National Butterfly Center in Mission, TX has become the unexpected stronghold of opposition to the building of the border wall. As the current home of more than 200 species of butterflies, the center is in jeopardy of losing access to its privately owned sensitive and vital wildlife nature preserve. Department of Homeland Security Customs and Border Protection (DHS) seek to build a 1.2 mile road from the levee to the Rio Grande River. Under the DHS’s eminent domain, the government also plans to seize more land and build the wall that would ultimately cut the 100 acre preserve in half, making as much as 70% of the land inaccessible between the Rio Grande and the wall. In october 2018, several environmental organizations filed a lawsuit against the government to stop construction since it is a violation of the Endangered Species Act. In February of 2019, the National Butterfly Center continued its efforts to fight construction by filling a restraining order against DHS.

Infamous for the practice of holding children in cages made from chain-link fencing, the Ursula Detention Center in McAllen, TX, was constructed out of an old warehouse and opened in 2014. The undocumented immigration central processing center is the largest U.S. Customs and Border Protection center in the United States, and can hold more than 1,000 people. A medical review of the facility revealed egregious conditions: cold temperatures, 24 hour lights, and inadequate access to food, water, basic sanitation, and medical care.

Saturday, July 27th 2019, the Beyond the Border Rally was held at a local park in McAllen. Activists from across the country joined the protest. The Carrizo/Comecrudo Tribe has been in South Texas, northern Mexico, and along both sides of the Rio Grande for centuries. Those who took the stage spoke of their relatives across all borders. They also spoke on behalf of immigrant and refugee families being separated, possibly to never see each other again. Participants stood in solidarity with migrants and with the purpose of continuing to stay vigilant. As the original caretakers of these lands, the Carrizo/Comecrudo Tribes have inherited authority over migration and demand the end of the U.S. government’s barbarism at the border and on their stolen land.

Why Getting An Accurate Count On The 2020 Census Matters

My Home, the Ft. Berthold Reservation, is a Web Of Oil and Gas Pipelines. Here’s Why I Oppose the Keystone XL Pipeline.