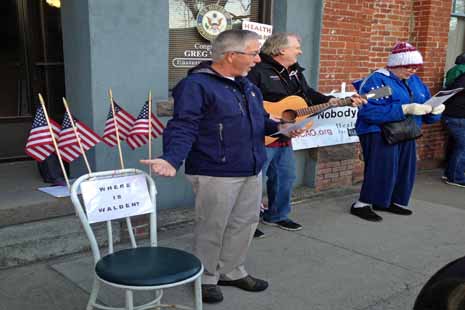 During the first two months of 2017, the Oregon Rural Action Health Care Reform Action Team (HCRAT) worked with other local groups to rally and fight Congressional threats to dismantle healthcare for the most vulnerable Americans.

At a Feb. 25 rally, 70 people protested threats to health care in front of Oregon Congressman Greg Walden’s office in La Grande. Walden, who was in the district, was invited to meet with Eastern Oregonians who wanted to talk about healthcare. Walden did not show up at the rally.

In symbolic representation of his absence, participants stationed a chair for the representative with a sign that said “Where is Walden?” outside his office. Waving signs and flags, rally participants played instruments, sang songs, and shared stories about how their lives were better because of the Affordable Care Act.

Walden is the chairman of the first committee to consider the Republican proposal, the Energy and Commerce Committee. On March 2, he presented the proposal in an secret meeting of Senate Republicans. HCRAT said the proposal would destroy the Affordable Care Act, roll back Medicaid expansion, and replace insurance subsidies with tax credits, among other provisions.

A report by House Democrats found that Walden’s district added more new Medicaid recipients – 129,200 – under the Affordable Care Act than any other congressional district represented by a Republican and all but three districts represented by a Democrat.

The team plans to join the Trump Postcard Campaign to flood the President with postcards March 15 to let him know that they do not stand for his policies. For more information on how to participate in the postcard action, visit www.theidesoftrump.com.