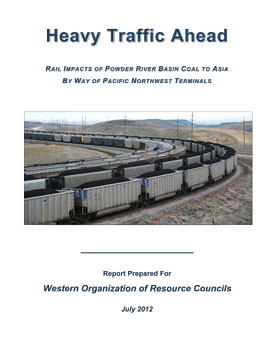 Heavy Traffic Ahead, for the first time, identifies costs, many of which will fall on taxpayers, for infrastructure due to increased rail traffic.

The report shows that coal transport could exceed 75 million tons per year by 2017 and 170 million tons per year by 2022 to the proposed terminals in the Pacific Northwest. For comparison, Transportation experts also found that increased rail traffic will affect grain producers that need access to rail space. The producers will face increased competition, potentially delaying shipments and increasing costs.

State and local governments will likely bear the brunt and burden of the related infrastructure costs in their localities and will likely be required to spend hundreds of millions of dollars in related mitigation, litigation, debt and other costs associated with the necessary improvements to accommodate export coal traffic levels. trains unloaded about 80 million tons of freight in Oregon and Washington in 2010, according to a June 30, 2012 article in The Oregonian.

The tremendous increase in rail transport will require additional overpasses, underpasses and other upgrades, costs which taxpayers have typically had to pay.