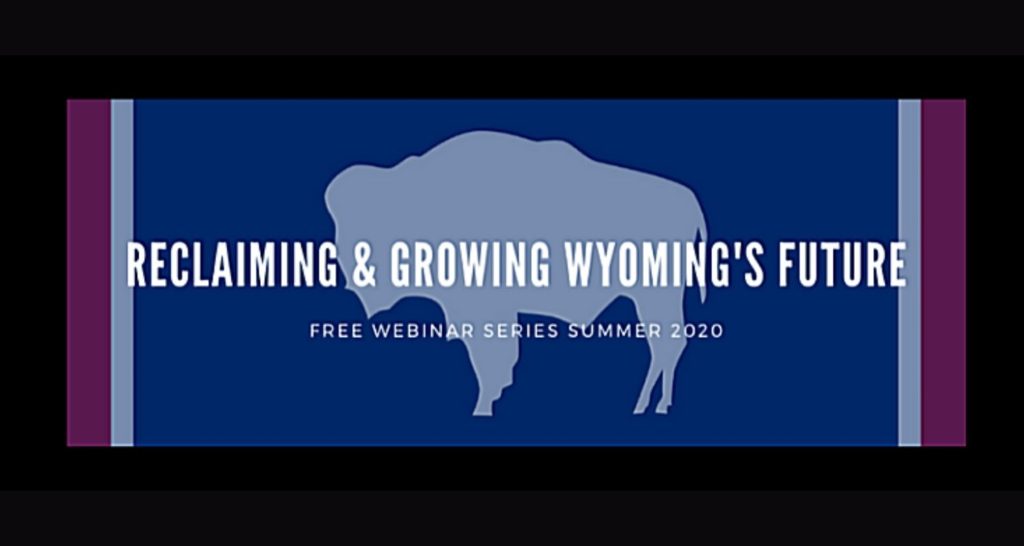 Powder River Basin Resource Council webinar series brings together experts to talk about the tools and resources available for a planned transition to a new, diversified Wyoming economy.

Powder River’s debut webinar series has wrapped up after a successful run. Thanks in part to timely topics and qualified speakers, the series helped us achieve our purpose of getting a deeper conversation going on issues facing Wyoming.

As members know, Powder River advocates for the responsible development of Wyoming’s energy resources. The series of webinars was intended to provide the education, tools and resources available for a planned transition to a new, diversified Wyoming economy.

Originally planned as a two-day event to be held in the southwest Wyoming coal communities of Kemmerer and Rock Springs in early May, we shifted gears when the Covid-19 pandemic hit. With plenty of staff teamwork and collaboration, we were able to reach nearly 170 active participants, while videos and press coverage have reached many more. In addition, we had quality attendance, with a diverse group of people engaged in the conversation. This engagement gives us the opportunity to further build momentum towards a sustainable economy.

Our first webinar, Wyoming’s Reality and Future Opportunities, kicked off the series on June 17 with speakers Dr. Robert Godby, Associate Dean of the Haub School of Environment and Natural Resources at the University of Wyoming; Kirk Keysor, Economic Development Representative with the U.S. Department of Commerce’s Economic Development Administration for Montana and Wyoming, and Sharon Fain, Rocky Mountain Power Vice President for Wyoming. They discussed Wyoming’s current economic situation and identified opportunities and possible solutions for moving forward. Larry Wolfe, a retired natural resources/energy attorney from Cheyenne served as moderator.

Godby encouraged Wyomingites to talk about energy and how to diversify the economy, to figure out how to pay for services, and finally to ask ourselves what kind of state we want to leave for future generations. Keysor urged communities to reach out to the Economic Development Administration, which offers several different grants, with projects and pointed out that coal’s decline is not just impacting coal communities. Fain pointed out that PacifiCorp, Rocky Mountain Power’s parent company, plans to invest $3 – $4 billion in Wyoming in renewables and transmission infrastructure that will provide the lowest cost to customers, as well as a just transition for workers and communities impacted by the company’s decision to retire coal plants.

“Coal Country” includes 330 U.S. counties with coal-fired power plants, economic transitions are not unique to coal. We can learn from other transitioning communities, including those with economies based on timber, steel, or auto manufacturing.

All three speakers discussed their respective organization’s role in economic transition. Morgan and Schwartz pointed out that while “Coal Country” includes 330 U.S. counties with coal-fired power plants, economic transitions are not unique to coal. We can learn from other transitioning communities, including those with economies based on timber, steel, or auto manufacturing. Some tips include: Plan ahead for resilience, think regionally, assess strengths and weaknesses. They also noted that the technical skills of dislocated miners and plant operators can be transferred to other industries.

Fitz-Gerald discussed the state’s Covid-19 response and pointed out that the rise in “remote work” levels the economic playing field for Wyoming. People have a preference for safety and security, and Wyoming can also leverage its assets for tourism and the outdoor recreation industry. She said that the Business Council wants to hear from Wyomingites, about our needs and successes. “Together we can create a vision of success and share ideas. There is a silver lining in the current crisis, in that it is an impetus for change,” she said.

In the third webinar, held July 6, Securitization: A Finance Tool for Energy Transition, we were trying to demystify a wonky but useful tool that can help communities take advantage of the opportunities in the rapidly changing economics of the electricity sector.

while workers are 10% of the cost of energy, they bear a disproportionate share of the costs, while local communities also see significant impacts.

Our first speaker, Uday Varadarajan, is a principal economist in Electricity Practice at Rocky Mountain Institute (RMI). He stated that “Ratepayer-backed bond securitization is a tool to make transitions more fair and just.” He noted that while workers are 10% of the cost of energy, they bear a disproportionate share of the costs, while local communities also see significant impacts. Securitization is a tool that can reduce those impacts and provide transition money for affected workers and communities. Such investment can also provide future benefits. Legislation is needed to achieve this, and Colorado and New Mexico offer examples.

Max Backlund, Senior Research Associate for the Gardner Institute at the University of Utah, and a member of the Utah Coal County Strike Team said, “We all benefited from coal and should all own the transition and help the affected workers and communities.” He added that securitization can provide money for education, infrastructure, and secure investments in housing and community attractions. He stated that we can still honor the role of mining and energy and respect a town’s character and identity. He suggested that to address political resistance, we focus on building relationships, and advantages for the community.

He suggested that to address political resistance, we focus on building relationships, and advantages for the community.

Both speakers thought that deploying alternative energy resources could be part of a more comprehensive economic package that would allow us to take advantage of federal funding, and combining that with securitization could provide powerful financing options to diversify our economy.

The fourth and final webinar, Funding Wyoming’s Economic Transition, was held July 21 and addressed resources like the Just Transition Fund, public financing, and even the cannabis industry. The speakers were Ben Alexander, Senior Program Advisor with the Resources Legacy Fund; Chris Markuson, Director of Colorado and State Economic Transition Policy for the BlueGreen Alliance, and Cindy Winland, Senior Fellow for the Just Transition Fund. Dale Steenbergen, CEO of the Greater Cheyenne Chamber, moderated the session.

Alexander noted there are unique challenges for rural places trying to sustain employment, retain youth, and maintain a standard of living to which many people have grown accustomed. He suggested that before we ask people to make sacrifices and cuts, we need to ask what’s important about Wyoming that we hope to preserve and let that guide the conversation on how to allocate resources.

He suggested that before we ask people to make sacrifices and cuts, we need to ask what’s important about Wyoming that we hope to preserve and let that guide the conversation on how to allocate resources.

Winland talked about the Just Transition Fund and its grant programs meant to assist affected workers and communities impacted by energy transition. She said the first step in the process is simply to begin to understand the community and its stage of transition, and goals for the future. Next steps can include outlining resource needs, determining timelines and milestones, and helping to develop and implement training and educational programs.

Markuson talked about Colorado’s transition plan, and discussed the importance of including the people most affected by the changes. He also discussed Colorado’s lucrative cannabis industry. All three presenters repeatedly emphasized that successful plans require a balance of both short-term mitigation and long-term opportunities, and the importance of working with and funding local educational opportunities

Going forward, planned follow-up includes review of a survey sent to those who attended the webinars, more webinars (including one on worker-related issues), and further outreach we can tie to the Western Organization of Resource Council’s (WORC) reclamation jobs report Coal Mine Cleanup Works, as well as the growing renewables industry.

Personal conversations and relationship building will be part of our ongoing campaign and conversation. We intend to keep the conversation going; we hope you’ll join us! Videos of the webinars are on Powder River’s YouTube channel and their website.