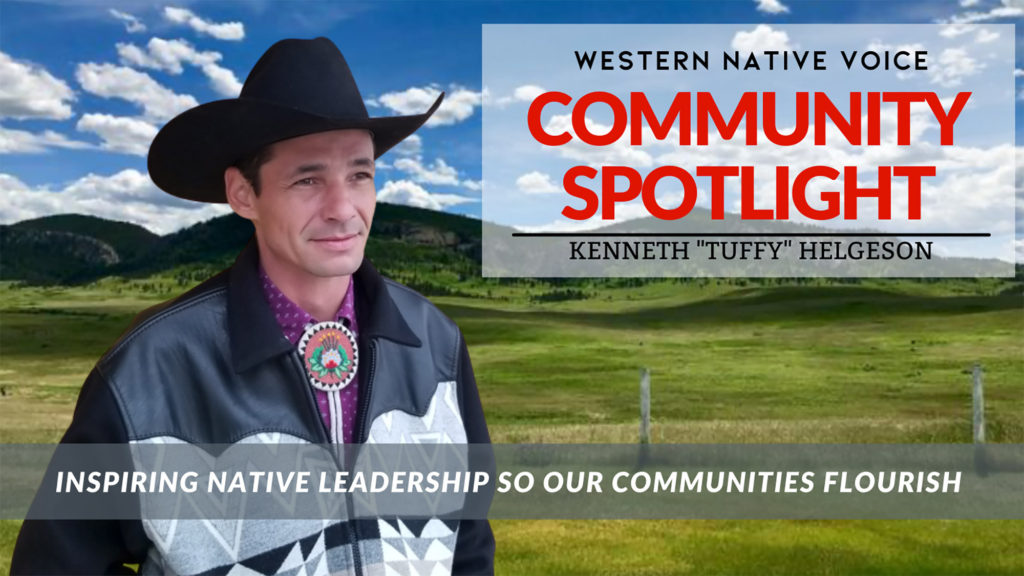 Using “language” and “old ways” to build a thriving community.

Western Native Voice works year-round to inspire Native leadership so our communities flourish. Their Community Spotlight is designed to highlight grassroots organizing and individuals creating change from across Montana and in Indian Country.

Introducing Kenneth “Tuffy” Helgeson, an Assiniboine member of the Fort Belknap Tribe, who resides in Lodge Pole, Montana. In 2020, Tuffy was one of the many people nominated for Western Native Voice’s “COVID-19 Caregiver Grants” which celebrated and honored those in our Native communities who have quietly gone above and beyond, caring for and giving to those most in need during the COVID-19 pandemic.

“Kenneth ‘Tuffy’ Helgeson has contributed to our community in many ways. He has taken a lot of our young people and showed them the important things on how to live a good life and who we are as Indian people. He shared his knowledge of the plants that come from grandmother earth and how to make medicine out of them. He would share the medicine with our community members when they were sick with COVID. He would also purchase groceries and deliver to the people’s home who were quarantined. Our young women and men now have the strength and knowledge to overcome the problems that they face in life through the language, songs, and ceremonies that Tuffy has shared with them.”

Here is his story in his own words:

My name is Kenneth “Tuffy” Helgeson and I was born and raised in Lodgepole, Montana. My parents were Gene and Nancy. Along with my parents, I was raised by my grandmother, Dora First Chief Helgeson, who is the great, great grandaughter of Chief Nosey. I was also raised by Gus and Florence Helgeson. I remember when I was little, Gus and Florence had a TV and a car and didn’t have any kids so I hung out there all the time. I would go from place to place.

Those three places were my home.

How did you get the name Tuffy?

I was an early baby…months early. Living in an incubator. When they were finally able to bring me home from the hospital, I developed a hernia. They ended up having to take me back for surgery. After the surgery, they said that I would be pretty docile, but I started moving around trying to crawl. My grandpa Raymond who lived only one year of my life said “ he’s a tuff little guy”!

What was it like growing up in Lodge Pole, Montana?

I was raised on a ranch which taught me how to work at a young age. We were always on horseback. We were poor. My mother was the main breadwinner until I was in second grade. She had emphysema really bad. I traveled with my grandmother a lot back then. She would take me with her to the senior citizen center. I was always in old people’s places and spaces. In those days, there were a lot of old folks still, they spoke Nakoda. I always heard the language growing up. They talked a lot about the culture of the Assiniboine people. Through the love of language, our connection grew. I started talking Nakoda about 10 or 11 years of age. There were only about 20 total fluent speakers of the language at that time. You get close to the people who speak the language.

In the mid-80s, there was a resurgence of our ceremonial ways. Gus and Florence starting exploring the religious side of sundance and sweat. As those things were happening, I was being introduced to speakers, and leaders, and it took me all over Canada and Montana.

In middle school, I was looking at the kids at my lunch table and it struck me that no one was participating in any cultural activities like I was.

Tell us about your education. How did you get started teaching?

I had scholarship opportunities in high school, but I decided to stay home to take help care of my grandmother who was 89 when I graduated. She needed around-the-clock care. The school needed an Assiniboine teacher, but my grandmother told me I didn’t know enough. Finally, after some time, she gave me her approval. So I began to teach the Assiniboine language at 18 years of age.

What were some of the struggles in your life and how did you overcome them?

I really believe that some of our people’s struggles, trauma, and social ills, come out of sexual abuse. It really raised hell with me for a long time. I never told anyone. They say hurt people hurt people. When I was about 18 years old, I just decided to talk about it. It really changed a lot of things for me.

Alcoholism and drug abuse were around me all the time, but because I was around ceremonies, I knew there was more. I had the sweat and grandparents…we were always busy and we were working all the time.

How did you get started being involved in your community and who are some of the people that influenced you to do so?

When I was little, my grandmother would take me up to the cemetery every year to clean graves. I learned the value of prayer, grandmother, and community. She would also take me to the New Year’s dance and Milk River Indian Days. As she started to age, she was so proud of the community and her people. I watched her do so many things with so little money like hold garage sales and bake sales. She used the money she made to put a new fence around the cemetery. I watched my dad get involved with the school board. He also served a term on the tribal council. I watched Gus and Florence’s involvement with the mine. I attended all those meetings as a little boy and listened to all the conversations at the meetings. After I graduated, their ranch was foreclosed on. In our area, if you were going to make a life, you had to have cattle. Most families were cattle people. You had to make a living.

While I was caring for my grandmother, she would tell me stories…about how the community was supposed to hold things together. At that time, some of us in the community got together and organized. One of the first things we did was start a pow-wow…which has been going for about 15 years now. Then we moved on to a rodeo…a kid’s series rodeo in Lodge Pole. We then got involved with a convenience store and gas station. We learned so much about coding, zoning, etc. when we built that convenience store.

About five years ago, our community started gardens with an earth-friendly greenhouse and a 60 tree apple orchid. The idea was to take food and prepare it and we would be able to sell it in our store. We have canning classes and network with the local extension programs. We are learning about medicine and healthy ways of living. We have a daycare emersion center that opened on September 6 and will house up to 53 children. My sister was the driving force behind the grants to start some of the projects through the Island Mountain Development Corp. Now we are looking at housing, rent to own housing for our people.

Who inspired you and/or who were your role models?

Joe Ironman, Bob Fourstar, Kenneth Ryan, Tommy Christian, Max White, Selina Ditmar, Harris Rock, Gilbert Horn, John Allen, Jr., and others. My life has grown so much through language. We translated all our old stories and I get to reshare stories with others now. We started to take all the stuff that was there and make it useful to our people by creating a dictionary and curriculum of the Nakota Language for K-12.

Why is it important for everyone to be involved in their community?

I always think this is the best place in the world to live. When I was growing up, nobody wanted to live here and no one wanted to be here. But now, by taking action in our community, our poverty rate has dropped by 40% in Hays/Lodgepole.

What community and social organizations do you currently belong to?

What or who inspires you to keep on doing what you are doing?

My grandmother. Everywhere I work I have a photo of her. She was such a strong person. She came through a lot. They tied her ankles and wrists and threw her in a wagon when they took her away to boarding school…she was crying. In the end, she went on to get her GED and even took some college classes. It’s our responsibility to keep pushing forward because our ancestors struggled really hard for us.

What do you consider your greatest accomplishment?

Being a husband and a dad. Your homefront has to be strong. We always want better for our kids. My wife and I have helped raise 32 kids that have come through our house. There are no safe homes or social services in our community.

Why is it important for young people to be involved in the decisions being made for their community?

We need to empower young people because the narrative hasn’t been written right. We need to teach our kids about boarding school trauma. We need to talk to elders because there are the people that really know what happened. The youth need to have their place, they need to have a voice. We think we are doing the very best with the students, but we are so out of touch with them. The world that we lived in is so much different now with the Internet. They don’t identify with being Native now. They might have dark skin but they don’t have an identity. They need to get involved.

Have you ever thought about running for office?

I ran for tribal council when I was 25 years old. A Gros Venture person was running and he needed an Assiniboine to run on his ticket for chair and vice-chair. However, I believe you don’t always need the tribal council to get things done, you can do it yourself, you don’t need to depend on anyone. Maybe one day I will run again.

I have also gone to DC and lobbied numerous times. You have to be over there to get your story heard. You can’t be sitting in the middle of Montana whining and expect things to get done.

What would you want the outside world to know about your community?

That this is the greatest place in the world to raise kids. People come together to help each other. When my parents died, my wife and I were running 370 head of cows. I was tending to my mother, and when I got home, there were a whole bunch of pickups at my place. My friends and community members got together and had branded all my calves. People just step up to help each other.

What is one change you would want to see in your community in the next 5 years?

I want to hear our language spoken more.