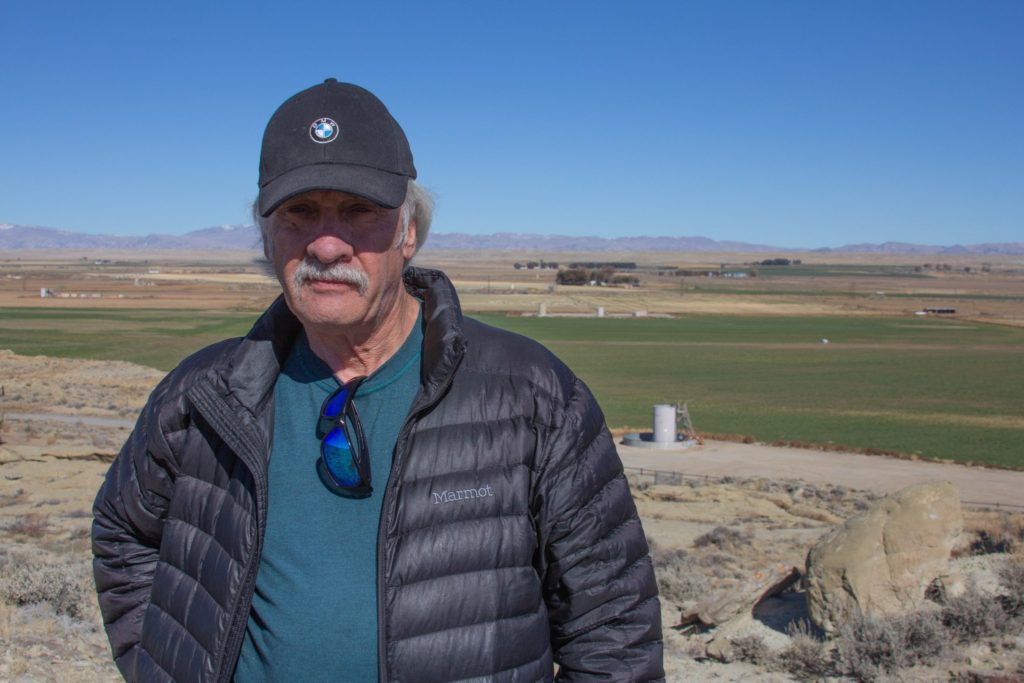 This story is part of WORC’s Living with Oil and Gas narrative project.

Mike Wireman stared out across a wide valley of farmland tucked into the folds of west-central Wyoming. “It’s sad to see the ranching way of life being impacted here in Wyoming and throughout the west. And I think from an environmental perspective, ranching and farming is way safer than many other land uses that are out there. It’s a way of life that doesn’t deserve to be impacted,” said Mike. Stretches of irrigated green fields stand in contrast to both the dry hills beyond, as well as the dusty brown natural gas wells, pipelines, tanks, and compressor stations dotting the landscape. Those wells in particular, are why he’s out here. Farmers and ranchers living within the Pavillion Natural Gas Field have been experiencing water contamination in their drinking water wells for over twenty years. Without freshwater to drink or water for livestock, agricultural families have been severely impacted here. Mike, a hydrogeologist, has spent the last five years trying to understand what’s going on.

Mike Wireman is the president of a small consulting firm called Granite Ridge Groundwater that runs out of Boulder, Colorado. He’s been working as a hydrogeologist for 40 years all around the world on groundwater issues including contamination, supply, management, and vulnerability assessments. Most of that time was spent working for the Environmental Protection Agency (EPA). He has worked in Wyoming on a variety of issues, including the impacts to water resources related to exploration and development of oil and gas. Since his retirement at EPA, he has been working with Powder River Basin Resource Council over the last three years to help the organization investigate and interpret data related to the groundwater contamination problems associated with the infamous Pavillion gas field.

From atop a ridge west of Pavillion, Mike gazes over miles of farmland filled with scattered houses, barns, gas wells, and gas compressor stations. Goats bleat in a field that encloses one of the gas wells, with dirt roads and tan out-buildings breaking up the pasture. At the bottom of the hill, a knot of gas pipes rise out of the ground like giant snakes near parked farm trucks and tractors. It’s close enough to the farmhouse that someone without much skill could toss a rock and hit it.

Mike pulls his ball cap a little lower, shielding his eyes from the Wyoming sun and describes the geologic features of the Wind River formation which makes up the valley.

The Wind River formation has posed a unique set of challenges for protecting groundwater and the environment due to its unusual hydrogeological setting. The majority of the gas that is held within this formation is thousands of feet below the surface. However, smaller pockets of gas are located at shallow depths, at some points less than a thousand feet deep. It is not economic for companies to attempt to extract the gas at these relatively shallow depths but their presence causes complications when attempting to drill and install production wells through them. This same formation contains uranium, coal, and freshwater. To develop one of these resources without impacting the other is extremely difficult.

“In most types of geologic environments that contain oil and gas reserves, you will have a shale or a siltstone layer that has a very low permeability. Water and other fluids don’t move through it very readily. The gas or oil will typically be below that and the freshwater will be above that. So there’s usually some separation, that’s not the case here. Not at all, there is no confining layer, there’s nothing to prevent upward movement of any fluid in this formation,” explained Mike.

Of the more than 170 wells in the Pavillion gas field, many were incorrectly constructed. Space left between the well casing and the earth around it has allowed methane and other stray hydrocarbon compounds to move vertically outside of the wellbore.

“Historically, over geologic time, there has been some movement of that gas within this formation, because it doesn’t take a lot of pressure to make gas move in the subsurface. And they [oil and gas companies] go down, and they produce from the deeper deposits. But sometimes they drill right through the shallow deposits, and they don’t produce from them. Then you have a number of wells that have this pathway along the annulus, which is the space between the outer part of the casing and the wall of the hole, and gas can then move upward, because the gas is trying to get to the surface and it moves up that space,” explained Mike.

The result is stray gas migration. Methane moves up into the Wind River formation in the upper thousand feet where most of the freshwater occurs, where people have domestic water wells, irrigation and municipal wells. There are usually small amounts of methane found at these levels but with oil and gas production and these newly created pathways, there is a significant increase in methane found at the levels that contain and provide fresh water. Methane in the groundwater supply can lead to issues down the line for people with domestic water wells.

“It causes what are called methanogenic bacteria to multiply and grow and thrive and the byproduct of that is this black water. It is slimy, smelly and contains hydrogen sulfide which causes the smell. It has impacted upwards of 30 wells in the heart of this gas field,” said Mike.

“There is not really good science with what’s happened there. The toxicology is not complete in this country in terms of the effects of long term exposure to these organic compounds. There are a number of studies that demonstrate a statistical correlation between cancer incidence and people who live close to these facilities,” said Mike.

As a scientist, Mike has looked at the state and condition of the wells in the Pavillion field and gone through the standard methodology to investigate the situation. “All of a sudden, you have 35 [drinking water] wells go bad, there is a commonality here. And so it has to be treated that way, it has to be treated as a contaminant hydrology problem,” said Mike.

Powder River Basin Resource Council urged the state to sample 13 wells with the focus on bacteria sampling. The draft of that report identified the pathogenic bacteria that were found are ubiquitous in the subsurface along with high levels of dissolved methane. “Almost every time there’s a sample, you find methane, that all adds up, in my view, to this widespread occurrence of methane in the aquifer. And these [gas] wells are going through that portion of the aquifer, and the methane is feeding these bacteria,” said Mike. “The next step in that regard has to be more focused on these bacteria so that we know exactly what kinds of bacteria are there. Then we have to start correlating those bacteria with dissolved methane in these wells and the concentrations and the extent to which this aquifer has been contaminated by methane,” said Mike.

There are possible solutions for the Pavillion community and the residents whose water has been impacted, and this type of action is not unprecedented. “My personal opinion is there needs to be a partnership between the state and the gas companies that own these wells,” explained Mike, “they need to partner to pay for a municipal-size water well that could be drilled and constructed away from this gasfield. Then that water can be brought to and distributed out to these 20 or 30 homes that have been impacted.” There are existing examples of places where this has been successful, including Gillette, WY, where a 40-mile pipeline pumps in water currently.

While an individual water well can go bad on it’s own, that’s not the case in the Pavillion. “These people have bad water through no fault of their own. They don’t benefit from any of this,” Mike said, gesturing toward the spread of gas wells out to the horizon. “They just get the bad parts of it. We have widespread contamination that is causing this bad tasting, slimy, black water. This contamination is the common theme amongst all these wells shown in the data that’s been collected since about 2004,” said Mike.

Despite the scientific evidence that has been gathered, it is incredibly difficult to prove accountability. For years, this community has waited while scientists gather data to help residents find a solution. “ You just don’t like seeing the damage that occurs and then it kind of goes away, nobody at the end of the day is held accountable because it’s hard to prove liability.” stated Mike.

Powder River Basin Resource Council and their local affiliate, Pavillion Area Concerned Citizens, continue organizing efforts to ensure all the leaking gas wells are plugged and all contaminated pits are excavated and cleaned up. These two groups are still working towards a long term freshwater supply or well treatment solution so the rural families impacted by the Pavillion gas field development can have clean water for domestic and livestock uses.

My Home, the Ft. Berthold Reservation, is a Web of Oil and Gas Pipelines. Here’s Why I Oppose the Keystone XL Pipeline.