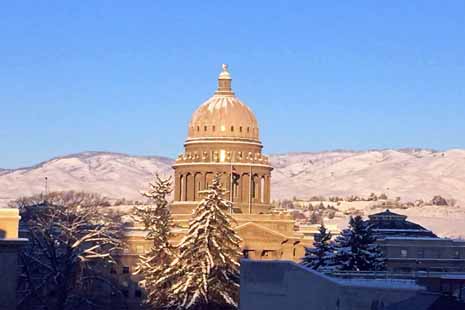 We are disappointed to say that Governor Butch Otter vetoed the grocery tax exemption bill on April 11. The bill had garnered widespread bipartisan support across ideological lines, passing the Idaho House on a vote of 51 to 19 and the Idaho Senate by 25 to 10.

Although Governor Otter vetoed the bill, momentum and political reality is on our side. Exempting groceries from the state’s sales tax will increase access to affordable food for all Idahoans, support Idaho’s family farmers and food producers, grow local businesses, and help communities that border states where there is no sales tax on food. The majority of legislators are with us, as are lawmakers from both sides of the aisle. All three 2018 gubernatorial candidates have stated their support of eliminating the grocery tax.

Here’s the most important takeaway from the grocery tax fight this year: The people are on our side. Even in his veto letter, Governor Otter acknowledged that he was going against the will of the majority of Idahoans. His excuse: the benefits of exempting groceries from the sales tax to working families are “largely imaginary.” We don’t think the benefits of getting rid of a highly regressive tax are fictional in any way.

What we’ve heard from many Idaho Organization of Resource Councils (IORC) members and supporters across the state is that the benefits are concrete and simple. The Governor showed his true intentions when he ended the veto letter by encouraging the state legislature to pass a bill in 2018 giving tax relief to big business and high income households. In the end, his decision had nothing to do with the benefits to working families, but rather providing tax relief for a select few.

The fight lives on. Very few people believed that the grocery tax exemption bill would make it as far as it did this year. It made it all the way to the Governor’s desk for two reasons: legislative sponsors were willing to challenge political leadership, and there was a strong grassroots support for the bill.

As we look into the next year, it’s clear that our purpose is to grow the grassroots support behind exempting groceries from the sales tax. We are asking that all IORC members and supporters be willing to add their voice to the fight, and we will help bring your voice to the state house.

IORC will be mobilizing members and supporters throughout the year to share your stories on how the grocery tax impacts your life. We want the legislature to hear you, and not just the lobbyists and “economic experts” in Boise. Rest assured, it will be your voice that makes the difference as the grocery tax fight moves on into this next year.

The Idaho Organization of Resource Councils issued this response to the veto of a bill to exempt groceries from the state sales tax.