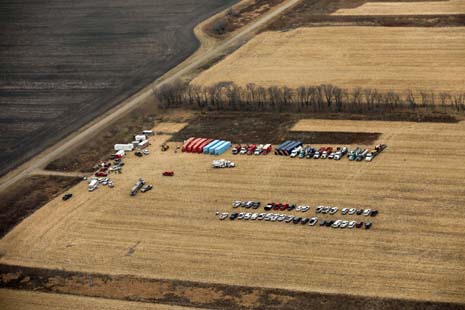 On November 16, the Keystone 1 pipeline leaked tar sands oil for the second time in South Dakota. The spill in Marshall County, which totaled 210,000 gallons, ironically occurred just days before Nebraska regulators will decide on permitting the Keystone XL pipeline.

WORC member group Dakota Rural Action (DRA) was immediately at the scene taking aerial images of the spill and surveying the cleanup efforts. At present, it is unknown how long the cleanup will take and extent of environmental damage.

DRA members live, farm, and ranch along the proposed Keystone XL route. For years, DRA has opposed the Keystone XL route through South Dakota. Their opposition stems from the organization’s desire to protect its rural members. Ultimately DRA members hope that Nebraska rejects the permit for Keystone XL.

Following the spill, Dakota Rural Action released the below statement:

Dakota Rural Action (DRA) members grieve for the environment, the landowners, and community after a spill of this magnitude. To see destruction on land you steward is always devastating. On several occasions the South Dakota Public Utilities Commission (PUC) has heard landowner concerns about the ability of TransCanada to safely operate a pipeline.

This spill comes days before the Nebraska Public Service Commission (PSC) is scheduled to make a decision about permitting the Keystone XL Pipeline. This spill should be a clear warning against giving that approval. The South Dakota PUC ignored landowner and experts concerns about construction practices used on Keystone 1 and approved the Keystone XL in South Dakota. We urge the Nebraska PSC to take a different path.

Conditions have changed since this pipeline was built and Keystone XL was first proposed. Demand for fossil fuels is dropping as renewable energy technologies become more affordable and efficient. Keystone XL is not in the public interest.

In addition, serious scrutiny must be leveled upon TransCanada before they are allowed to once again operate the Keystone 1 pipeline. This is a new pipeline. These kinds of leaks raise serious concerns about the construction quality along the entire route.