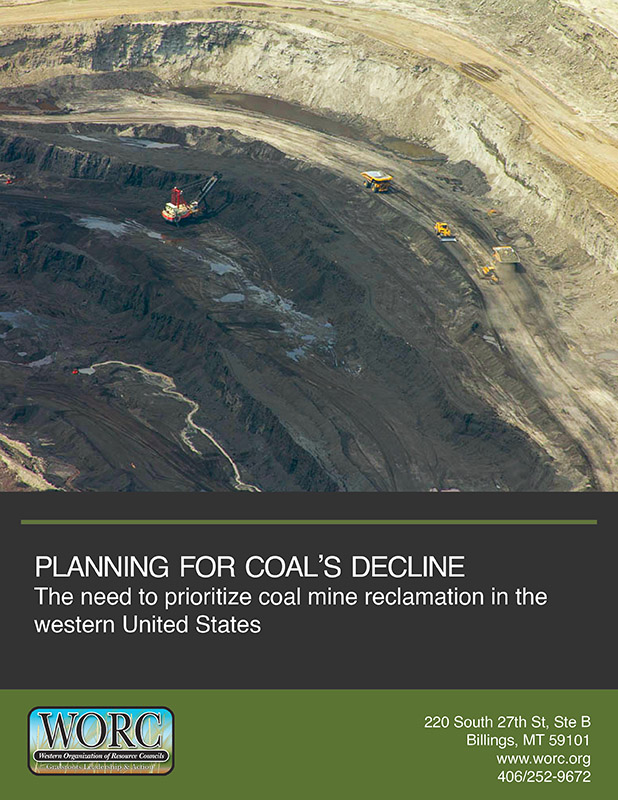 More than a third of all land mined for coal in the Western United States awaits cleanup after a half-century of intensive strip-mining, but will a weakening coal industry be capable of cleaning it up?

Planning for Coal’s Decline provides updated data on coal mine reclamation in the Western U.S. and recommends policies to help ensure coal mine cleanup before and after mine closure.

Federal law requires coal companies to “contemporaneously” reclaim land mined for coal as mining progresses. As a precaution, the law also requires that mining companies provide funds or guarantees to pay for cleanup, usually through reclamation bonds. The report describes significant and growing acreages of unreclaimed land at coal mines and weaknesses in state and federal policies that have allowed reclamation to be delayed. It also discusses the inadequacies of some forms of reclamation bonding, including self-bonds and collateral bonds.

Coming mine closures are foreshadowed by several years of high profile coal company bankruptcies, including the July 2019 closure of the Eagle Butte and Belle Ayr mines in Wyoming when Blackjewel LLC filed bankruptcy. These closures — the first since large-scale mining in the Powder River Basin began in the early 1970s — are a sign of what’s in store for Western coal country. More than 50 U.S. coal companies have filed bankruptcy in the last decade, and a vast proportion of domestic coal comes from mines that have gone through bankruptcy in the past five years.

The report recommends several actions to minimize the risks of underfunded and state-run mine cleanup: