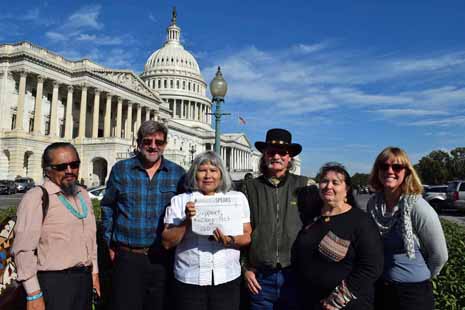 Last month, WORC members from three states joined advocates from across the country in Washington, D.C., to lobby Congress in support of the RECLAIM Act, HR 1731.

Gene Wirtz from Underwood, N.D., Kate French from Bozeman, Mont., and Roger and Tina Carver from Nucla, Colo., met with a combined fourteen Congressional offices to ask for their support for the bill. They joined forces with Navajo Nation members Earl Tulley and Lori Goodman, leaders of local grassroots organization Diné CARE (Citizens Against Ruining the Environment).

The RECLAIM Act proposes to spend $1 billion over five years to clean up legacy coal mine pollution across the country in places with significant economic development potential. The bill targets local communities looking to diversify their economies after recent declines in coal mining and burning. The money comes from an existing fund that otherwise wouldn’t be tapped for reclamation until after 2023.

Tina and Roger Carver are members of the Western Colorado Congress. Tina works at the local library. Roger is a coal miner and reclamation worker for the New Horizon Mine. He serves as president of the local United Mine Workers Association. The mine in their town is already out of production. The power plant — the largest employer and a plurality of Nucla’s tax base — is slated to close in 2019. This was their first trip to Washington, and their first time lobbying Congress.

If RECLAIM passes, “people like my coworkers and I would get to work cleaning up those abandoned mine sites,” Roger said. “RECLAIM will clean up the environment, bring jobs and economic development to places that need it most, set us up for new businesses in the future, and won’t use a dime of taxpayer money.”

The Abandoned Mine Land fund would supply the money. Coal mining companies pay into the fund based on production.

Earl Tulley and Lori Goodman from the Navajo Nation are in a similar situation. The Navajo Generating Station — the largest coal-fired power plant west of the Mississippi River — is set to close in 2019, along with the Kayenta Mine that supplies it with coal. Diné CARE supports RECLAIM as one of many needed solutions to help the Navajo diversify their economy and the streams of revenue that support the tribal government.

On the trip, Dakota Resource Council member Gene Wirtz visited the offices of Rep. Kevin Cramer (R-N.D.) and Sen. Heidi Heitkamp (D-N.D.). He explained RECLAIM would bring $35 million to put toward North Dakota’s estimated $38 million of abandoned mine pollution. That means RECLAIM would put North Dakotans to work to nearly wipe out abandoned mine land pollution in the state.

Kate French, from Northern Plains Resource Council, told Rep. Greg Gianforte (R-Mont.) and Sen. Jon Tester (D-Mont.) that the state would be eligible for $25 million in grants to put toward Montana’s reclamation burden.

The RECLAIM Act passed the House of Representative’s Natural Resources Committee on a bipartisan vote last June. The bill must pass through the House before transmittal to the Senate. Forty members of Congress from both parties currently sponsor the bill.