Meet Ivan and Ivy MacDonald, Montana filmmakers behind the documentary “When They Were Here”.

This month Western Native Voice spoke with Ivy & Ivan MacDonald, the Montana filmmakers behind the Missing and Murdered Indigenous Women documentary “When They Were Here”. We asked Ivan & Ivy about what inspires their work, what keeps them going and other topics.

Listen to the interview with Ivan and Ivy MacDonald here. 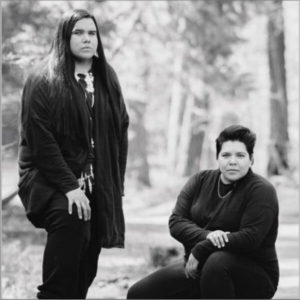 Can you both tell us where you’re from?

Ivan: We’re both Blackfeet. I’m born in Browning, our parents worked for the government. We moved around quite a bit growing up, recently I’ve been living in Missoula for the last two years as I finished my master’s in social work and now we’ve sort of went from there. I’m currently working at the Missoula Urban Indian Health Center as one of the Behavioral Health Providers. I am also currently still doing research with the University of Montana and working on a few film based media projects.

Ivy:  I moved over here four years ago. I got my BFA in a Digital Filmmaking and I graduated in 2017, but I’ve just been working on different projects. I’ve been pretty busy filming stuff and doing what we do here.

What would you like the outside world to know about your community?

“As a Native filmmaker I want to take that power back and give it to the people and say, we are able to tell our own stories and they’re just as good as if a white man came in and told it.”

Ivy, question for you, what does being an Indigenous filmmaker mean to you?

Ivy: When we are able to have the stories in our hands and when we’re able to tell them from our point of view, I think the authenticity is genuine. And I think that a lot of people nowadays, especially with all of the more Hollywoodized work, you don’t get that because they don’t want to hear from a Native point of view or Native perspective. They want to tell their own version of it. But I think with me as a Native filmmaker I want to take that power back and give it to the people and say, we are able to tell our own stories and they’re just as good as if a white man came in and told it. Our stories are better and so I think that when it comes from our perspective, especially as a filmmaker or Native filmmakers, I think it’s very important.

Ivan & Ivy, could you tell us what has been the most surprising thing on your journey as Indigenous filmmakers?

Ivy: I think the biggest surprise is just how many there are of us and how talented we all are. Growing up I never thought it was possible to even be sitting in a room with 10 other Native females and be like you guys are doing the same thing. So I think mine is just like how big the Indigenous film making community is.

Ivan, what are your thoughts?

Ivan: Indigenous people like hearing stories from other Indigenous people, but I’ve been surprised as far as how other non Native communities are just as interested in hearing those stories.

What impact does art, and in particular film making, have in social justice?

Ivan: The most common way that non-Native people get their sort of education, knowledge, awareness of Indigenous people is through media. That sort of the biggest, biggest area where people learn about me, that people, I mean whether Westerns, you know, John Wayne, Native movies like that. That’s where a lot of it comes from. For me, the importance of being able to sort of control that narrative. I always sort of hate phrasing it that way, but it really is, you know, we could have a non-Native and we haven’t had the past work, you know, we may have worked with non-Native people and they have definitely a different perspective than us and it’s always very sort of, it goes up against sort of what we hear from Indigenous people, what they want to see and how they want to be presented. And so I think media really gives us that opportunity to present our stories in the way we see them.

Ivy: A lot of the non-Indigenous people bring up the film Wind River which deals with Missing and Murdered Indigenous Women (MMIW), but it’s very Hollywoodized and it’s very, it’s from a white perspective. But the fact that that’s where they’re hearing it hearing, you know, because a lot of people were like, we didn’t even know this was a thing until we saw the movie. And so like even have MMIW be a part of like a Hollywoodized movie and like have non-Indigenous people see that. I think that’s important. But I think what falls short of course is the fact that it’s not from an Indigenous point of view. It was very, very white and very not accurate.

“Since we’ve sort of started the project and sort of started our work. I can count at least maybe 10 indigenous women, 10 to 15 who have went missing alone just in Montana.”

Ivy & Ivan, what inspired you both to begin your work on “When They Were Here”?

Ivan: I think with all Indigenous people, we found that everyone can share a story about Missing and Murdered Indigenous Women and Girls (MMIWG). Specifically in our film, we focused on the impact it had on our family with our cousin Monica being kidnapped and murdered in the early eighties. And you know, one of the big pushes for when we first started the project was Bonnie Three Irons who was killed on the Crow reservation. And you know, I think since we’ve sort of started the project and sort of started our work. I can count at least maybe 10 indigenous women, 10 to 15 who have went missing alone just in Montana. And so we just, you know, there’s this push and there’s this need and there’s this almost urgency.

Ivy: You know, regardless of anything these women were aunts, they were moms, they were grandmothers, they were daughters, sisters, and you know, there are much more than just statistics.

What has been the reaction when you’ve screened “When They Were Here”, or clips of it?

Ivy: When we first started the project I made a clip of the stuff we shot and I presented it in class and I had some white guy asked me in class while you were discussing the clip after and this guy was like, well why? Why is this important? The fact that I sat there showed this clip and the person that was talking in the clip was just talking about how the loss of a grandmother or mother, a daughter, a sister, how devastating that is to a family. And especially with Native families. And to have. Someone asked me why it’s important for me to show this as a Native woman showing this, I guess. I guess that was like the most undermining experiences I’ve had.

What are ways for people to become involved in raising awareness on the MMIW crisis?

Ivy: I think for me it’s just to show up and listen and be present and be aware and do anything you can.

Ivan, what are your thoughts?

Ivan: Contact your congressman and ask him to try to support some of the bills, you know, Savannah’s Act, sadly, is kind of dead in the water at this point. And so the big one that we’ve partnered with ACLU is the SURVIVE Act which tries to give female victims of violent crimes funding for resources for healthcare, mental healthcare.

Ivan, why is Savannah’s Act dead in the water?

Ivan: The support just really hasn’t been there for the bill. And so, you know, sadly I think at this point, from the figures I last read, and I can send the citation and I think it was only like Savannah’s Act only had like a 20 to 30 percent chance of passing, but you know, and I think that sort of, it’s good and bad in some aspects that, you know, this really needed Legislation might not possibly pass, but I think a lot of the fact that it has built some support that it doesn’t have beforehand has been really nice. But you know, we’ve sort of pushed our efforts for now just to the SURVIVE Act.

Do either of you have an inspiring message for the youth?

Ivy: You guys are a force to be reckoned with. People are going to listen and they should listen. And so I think it’s important just to keep going and don’t let anyone silence you.

Ivan & Ivy, thank you so much for your time

Ivan: Yeah, thank you for this opportunity.