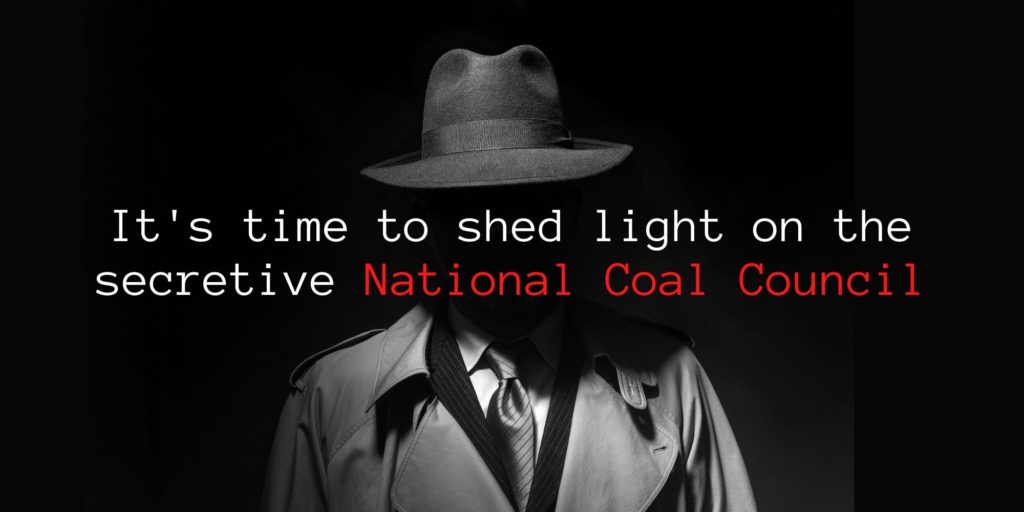 On October 15th, 2020, Western Organization of Resource Councils, sued the Trump administration for violating the Federal Advisory Committee Act (FACA) by refusing to make fully public the meetings and records of the National Coal Council (NCC) — an outside advisory group that makes recommendations on federal policies related to the production and consumption of American coal.

“The coal industry has long stacked the National Coal Council with coal industry representatives who meet behind closed doors to try to launder their own interests into federal policy while shutting out the voices of ranchers, landowners, and coal mine neighbors,” said Marcia Westkott, Chair of Powder River Basin Resource Council and member of WORC. “The only solution to this one-sided, secretive decision making is to pull back the curtain and open the National Coal Council’s proceedings to public inspection.”

“Under the Trump administration, the National Coal Council has used the imprimatur of the Department of Energy to work exclusively to advance the coal industry’s economic interests, and it has unlawfully kept the American public in the dark along the way,” said Democracy Forward Managing Senior Counsel Travis Annatoyn. “Federal transparency laws are an essential check on the ability of private interests to influence and corrupt public policy. We’re holding the Trump administration to account for its continued violation of the law.”

In line with President Trump’s “Energy Dominance” agenda, the NCC’s focus has recently shifted to advocate for the increased use and financial support of coal. Since 2017, it has issued four reports recommending policies explicitly designed to increase coal extraction, despite the long-term environmental and public health problems such extraction would cause. The recommendations were developed without regard for the environmental and public health consequences for western ranchers, landowners, and outdoor enthusiasts, the groups contend. In recent reports, the NCC has recommended:

The reports were prepared by and in consultation with many NCC coal industry members who have a direct conflict of interest in the contents of the reports, the groups say, because they would financially benefit from the policies proposed.

The NCC’s reports in 2015 and 2016 — before President Trump took office and reshaped the group — more vigorously examined how the coal industry could support the capture of carbon dioxide emitted by coal operations (and create a market for captured emissions) and evaluated how the industry could shift towards lower-emission operations.

“With the coal industry’s decline, the future of coal communities is at stake. But instead of planning support for coal miners in the coal towns and counties like where I live in southeastern Montana, the National Coal Council has pushed for taxpayer subsidies and rolling back protections for human health and the environment,” said Jeanie Alderson, a rancher near Birney, Montana, Chair of the Northern Plains Resource Council, and a member of WORC. “It’s heartbreaking that this secretive committee ignores the needs of my friends and neighbors while writing reports funded by shadowy private donors. We need to find out what’s being done in our name.”

The NCC is composed of two entities: the National Coal Council chartered under FACA, and a 501(c)(6) not-for-profit corporate entity called “NCC, Inc.,” funded by anonymous donors. All of NCC Inc.’s members are appointed members of the federally chartered NCC, and, as one court found, there is “no meaningful distinction between the NCC and NCC, Inc.” But even though NCC, Inc. and the NCC are functionally identical, Trump’s Department of Energy has so far refused WORC’s recent requests to grant the public access to NCC, Inc.’s materials and meetings. The Department has likewise not granted WORC access to NCC subcommittee meetings and materials, which collectively undergird most of the Council’s work product.

Without visibility into the NCC’s current work and the opportunity to provide input, WORC cannot inform its members across seven states of the council’s deliberations and proposals, and it cannot advocate on behalf of its members who farm and ranch on lands on or near coal, oil, and gas deposits. WORC’s suit seeks to compel release of the NCC’s materials from 2017 to the present and prevent it from going about its work until it complies with FACA’s requirements.

The lawsuit was filed on October 15 in the U.S. District Court for the District of Montana. The Western Environmental Law Center is local counsel on the case. Read the complaint in full here (to be updated with a court-stamped complaint).