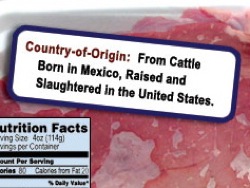 WORC and the member groups joined a coalition of 142 rancher, farmer, rural, consumer, manufacturer, labor, faith and environmental groups from across the United States delivered a letter urging the Senate to reject both the effort to repeal the country of origin labeling (COOL) law and the so-called compromise to convert COOL into a voluntary labeling program for beef, pork and chicken.

Rather than bow to pressure from the meatpacker lobby, the letter urges the Senate “to defend consumers’ right to know where their food comes from and the ability of farmers and ranchers to proudly identify their livestock as born and raised in America.”

Congress enacted COOL for beef, pork, chicken, goat, lamb, seafood and fresh and frozen fruits and vegetables in the 2002 and 2008 Farm Bills and expanded COOL to cover venison in the 2014 Farm Bill. Consumers overwhelmingly support these labels.

In June, the U.S. House of Representatives voted to repeal COOL for muscle-cuts of meat and ground beef, pork, and chicken. Senators Debbie Stabenow (D-Mich.) and John Hoeven (R-N.D.) proposed legislation to repeal mandatory COOL for beef, pork, chicken and ground meat but gave the USDA discretion to establish a voluntary COOL program for some of those meat products. This proposal has support some farm groups but others, including WORC, are rejecting voluntary and remaining steadfast for mandatory labeling.

A decision from World Trade Organization on COOL is expected early in December. The letter urges Congress to wait for the WTO ruling before acting. “We urge Congress to stand up for America’s consumers, farmers and ranchers by rejecting any effort to unilaterally repeal or weaken a popular food label even before the WTO process has concluded,” the letter states.

Read the news release and the full text of the letter.