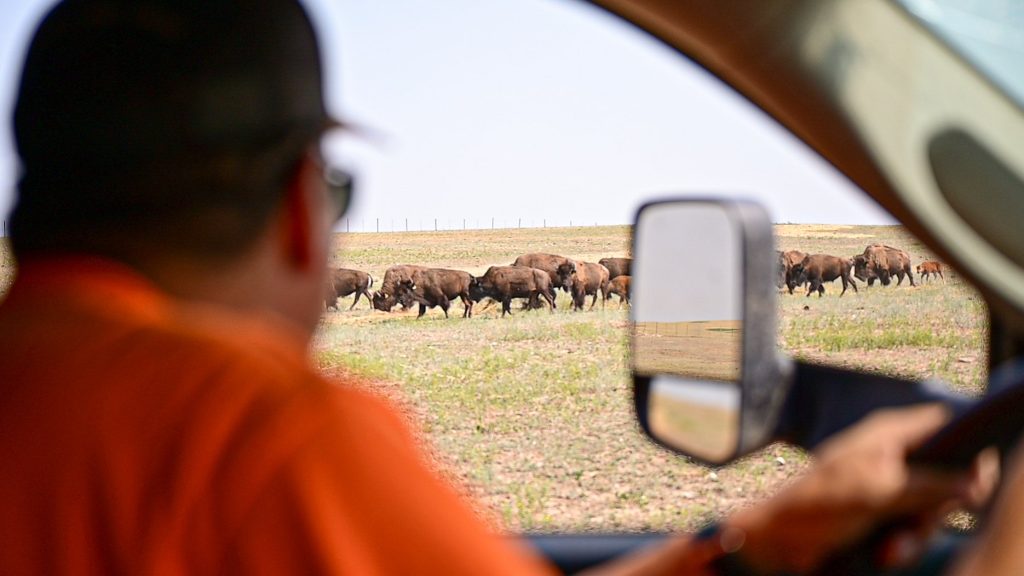 Members of the Fort Peck Assiniboine and Sioux Tribes discuss how reintroducing bison to the Fort Peck Reservation not only began healing for the tribes, but for the land as well.

In several locations in the West, bison reintroduction has begun to revitalize Indigenous culture, increase food sovereignty, and heal the land. The Fort Peck Reservation, in northern Montana, is one such place. The Fort Peck Assiniboine and Sioux Tribes are leaders in buffalo restoration and have continued the expansion of their buffalo program since the bison were first re-introduced in 1990. The ranch is currently nearly 15,000 acres with a capacity for 375 bison. In northern Montana, past the town of Wolf Point, there’s a dusty road that leads up to the quarantine facility, taking visitors and employees past rolling hills, and if you’re lucky, a large herd of buffalo.

The herd is managed by Robert Magnan, Director of the Fort Peck Tribe’s Fish and Game Department. In the mid eighties, there was a big push from the elders in the community to reconnect to the cultural roots. “Buffalo are a main part of that culture and history,” explained Robert. The buffalo at the ranch at Fort Peck come from Yellowstone National Park, located in the south-east part of the state. Tribal Fish and Game worked with the park to establish a brucellosis testing and quarantine protocol. Brucellosis is a disease that was brought to the states from European cattle and causes cows to miscarry. The bison are tested in two phases in Yellowstone and are then brought to the Fort Peck reservation for the third phase. If they test negative again at the Fort Peck facility, the tribe is able to give the bison to tribes anywhere in the United States. The herd from Fort Peck has already grown enough to transfer 50 buffalo to nine different tribes across six states, including Alaska, which was dubbed “operation buffalo wings”, as the buffalo were flown in.

Colonization and the brutal execution of the U.S. government’s campaign to eradicate resources that indigenous populations relied on has long separated the buffalo from the Tatanka Oyate — the buffalo people. Ramey Growing Thunder is the Director of the Fort Peck Tribes Language and Culture Department. “The more the buffalo comes back, the stronger the people will become,” explained Ramey. “In our cultural belief, we believe we are the buffalo people. The more people are exposed to them, the more the people will heal.” Ramey refers not only to the healing of the spirit of the people but the physical body as well. Buffalo meat is known for its lower fat content compared to beef and it has been attributed to helping people lower their blood pressure and being better for people with diabetes. Cooking with buffalo meat has also been an area of cultural loss over the last century. “The buffalo have a really profound part in our ceremonial foods for our food sovereignty,” explained Ramey. The tribe’s Language and Culture Department has been reconnecting the people with the culture through language courses in both Lakota and Dakota, cooking classes, and youth education. Attendees learn how to cook dishes with buffalo meat including traditional recipes such as Wasa, a form of dried buffalo meat.

Once the herd was established at Fort Peck, it was decided that it was time to start controlling the population through a lottery system for buffalo harvesting tags. In 2020, they gave out 40 tags to prevent overgrazing, but when COVID hit and food shortages began they decided to give out 36 more, putting meat into the fridges of every community member. “The pandemic turned our fears into reality,” explained Robert. The buffalo provided the community with a sense of security when it came to food during a time when the single supermarket in the town of Wolf Point was scarce with supplies. “We’re surviving on our own resources, that’s the whole purpose of this quarantine program is to then get buffalo to other tribes so they can do the same,” said Robert. The meat is so popular that over 270 people applied for tags in 2020, local schools have requested tags for their curriculums, and the diabetes programs have continued to request buffalo after seeing positive results.

The Youth Tribal Council, led by Carrie Manning also received meat to use in a chili cookout fundraiser for the council. “When I was growing up there wasn’t much talk of the importance of buffalo to our people,” explained Carrie, “It was maybe a paragraph in a text book I read in high school, but that’s all I knew.”  The buffalo ranch hosted a “Creator’s Game”  which over a hundred children typically attend. Teepees were set up with a variety of different educational programs from archery to how to make ribbon skirts. The ranch has served as a gathering place for many other educational and recreational programs over the years.

In addition to the benefit of food sovereignty, bison have also been proving to be better for the land. Robert recalled that many people thought the results of the first study done by the University of Montana on the impacts on the environment after reintroduction would be negative. The results were quite opposite. Having bison on the land has proven to have many positive effects. Buffalo and cattle graze differently. Buffalo browse, eating the grasses down to varying levels, moving frequently and not eating grasses all the way down to the root. “Some birds need short gasses to see the predators and others use tall grasses to hide from predators and when buffalo graze they create the type of landscape that provides for both scenarios. I call them mother nature’s best tool,” explained Robert. The Spriggs Pippin is a bird that has been seen returning to this area of Montana after a long absence. This species feeds on the bugs on the backs of the buffalo. They are a candidate for the endangered species list, but since the buffalo have returned, the birds have been repopulating. Because buffalo feed on high producing grasses, it also gives other species of plants a chance to compete in these areas, allowing for greater biodiversity in the prairie. They are also natural fertilizers, dropping nutrients in their manure for the next succession of plants as they graze across the land. Their hooves also turn the soils as the herds move from place to place.

Hope for the future of the environment brings hope for future generations. The buffalo bring back a sense of the connection that was broken during colonization. “We have schools come out for buffalo tours, and they have classes, and we give talks. And kids are really interested in seeing the buffalo boxes,” said Robert. The buffalo boxes are educational kits that are made out of buffalo hide and contain all of the various buffalo parts and how they were used. The parts are all labeled in Lakota, and Jonny BearCub, a member of the Pte’ Group that assists in the buffalo education activities with the community, leads that part of the education. For generations, many indigenous people were not made aware of their connection to the buffalo, but now, children are being raised once again with the buffalo, some of them will not know a time without them. “Now we are the generation to be able to share with the upcoming generation how important our buffalo are to us. And some of our traditional ways, it’s an awesome time to be living,” said Carrie, “We’re making a full circle. We went silent for a while, but we’re getting our voice back.”

Stay up to date with WORC’s newsletter

The Six Basic Principles of Soil Health: an Explainer