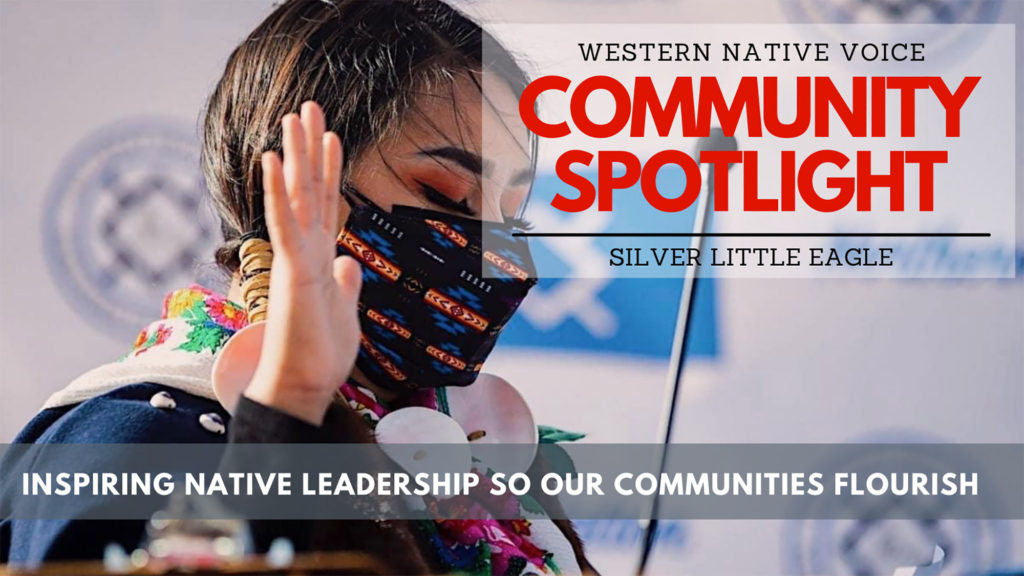 We are excited to share with you Western Native Voice’s Community Spotlight, designed to highlight grassroots organizing and individuals creating change from across Indian Country. This month, we would like to introduce Silver Little Eagle, 23, Northern Cheyenne’s youngest councilwoman. She is the 7th generation of Little Wolf and Woodenleg and a descendant of Humpback Woman and Little Eagle. Silver was raised by her grandmother, Adeline Fox, who also served on council for 12 years. After graduating from high school, Silver went to Dartmouth College on a Gates scholarship. Here is her story in her own words:

“We are vessels of knowledge, language, resilience, and our ancestors’ blood. I am a 7th generation of Little Wolf and Woodenleg. A descendant of Humpback Woman, Little Eagle, and many strong Cheyenne women. As a 7th generation, it is my duty to carry on our bloodline in a good way and end toxic cycles. This is why I am running for the Lame Deer District Seat. Vote November 3rd, 2020.”

Tell us about your college experience.

I felt that my spirit didn’t want to be there. I felt I wasn’t meant for western education. It took me a long time to accept that. Teachings and classmates….let the bad overpower the good. I felt really poor compared to other Native that were there. There is a class system within the Natives. My family was struggling at home and I had a lot of guilt. I came to believe that ancestral knowledge had more power than institutional knowledge. This belief helped me with my journey.

How did you pick yourself up when you left school?

My family was supportive when I left. I had a friend and boyfriend pass away during that. It was hard to get over my guilt of not going back to school. I went firefighting and it was very healing being on the land.

Would you mind sharing with us what your experience was in running for office?

I was the Activities Coordinator for a year. Spending time with elders all day really helped shape my values and morals. Elders have a medicine that radiates off of them. It affects you. I really support that, and I am a whole new person after hanging out with them. I learned Cheyenne values.

What inspired you to run for office?

All the usual people filed, and the same people were running. I was waiting for somebody to run and trying to encourage them to run. I just went for it as a write-in candidate. I was nervous. I respected the older people that were running and they are all men who we have respect for. I didn’t have a campaign and decided to run a week before. I sent out flyers in the mail locally. On a day of election I had a little drive through. I had the most votes and it was unbelievable. I thought, if I don’t get in at least I tried. 125 people believed in me. My family took me seriously. Grandma helped guide me through the next election. I had to face a lot of comments like she is too young, not experienced. I was told that people are ready for young people and that is why they voted for me.

We face different challenges. We have a voice for youth issues. I work with kids such as Boys and Girls Club. I see their challenges. They have suggestions and have solutions that are overseen. With a young person we have different priorities such as having healthy outlets and environmental issues. If I can do it, that shows them they can also run for office.

On average, women are asked at least nine times before they make a solid commitment to running. Why do you think that is?

We are not taken seriously. We change our minds a lot. Males were dominant prior to the last election and many were expecting males for these positions. Males are more confident, but now I can feel thoughtfulness and compassion in the meetings. I wonder how different it would be to have even one maie in this chamber. Cheyenne are patriarchal traditionally. True Cheyenne men hold women up high in value and care. We have to be in balance with each other.

Having been through an election, what did you learn?

Providing drive thru meals, social media, mailed flyers really helped with the election. We reached out to elders and younger people. It was pretty cool to see my name on other people’s social media. It felt good to have an elder come up to me and say, “Hey, I am going to vote for you”.

“I am asking you, the people to believe in me. We – the youth, the elders, the people have been burned and discarded by so many generations of councils. Campaigns of broken promises and excuses. If you do not believe in me, it’s fine. Because how can you win over someone’s trust after trust has been violated by cycles and cycles of toxic masculinity and tribal government excuses?

“If you choose to believe in my leadership, I will show up. I am showing up and will continue to show up for the community elected or not. Those who know me – know me to be an underground worker. Somebody who shows up not for the clout, not for the cameras – but for the well-being of others. I show up because I love our community. I love our language. I love our stories. I love our legacy.”

Who was your inspiration growing up and/or role model?

My grandma, Adaline Fox. She raised my brother and me. She is assertive and stern. She is someone I want to be. Right now I am soft spoken. Dezi Rodriguez who is a Cheyenne who went to LaBrea and who graduated at Stanford. She is active in Data Collection. Merca Spang who as a little girl, I saw pictures of her at my school. She went to Dartmouth.

What would you tell others who want to run for office?

Just do it. My Auntie told me the story of Buffalo Calf Robe Woman. Do you think she waited too long to save her brother? She just did it. That is what really calmed me down when I was running for office. My journey is exactly where I am meant to be.

What would you want the outside world to know about the communities that you consider home?

In Lame Deer, we are close knit and we know each other. Our lives are valuable. We are passionate and we are trying to be leaders that care as a collective, that care for everyone not just certain ones. Even the people that walk around all day have values and dreams that matter. My goal is to help them remember who they are…Cheyenne. We have our own spirit and values. That’s who makes us who we are by going back to those values. This current leadership will help us with these goals.

I want to focus more on ground movements that shake the earth. Oak Flat, Standing Rock, all these movements were started from grounds work people.

What is one change you would want to see in your community within the next five years?

I would like to see more community connections such as gardens, community halls, helping each other out. More renewable energy as we are facing challenges with electric companies. I have a vision of solar panels going up in my lifetime.