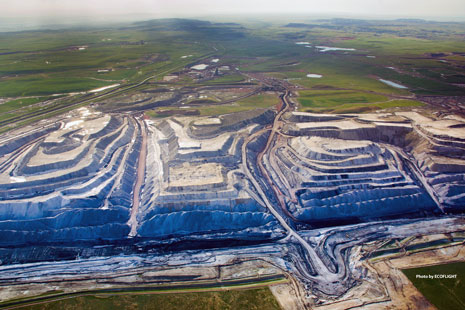 Market forces have battered the coal industry for years. When the country’s three largest coal mining companies entered bankruptcy over the past 18 months, no one was sure they would emerge. WORC leaders and staff engaged in all three bankruptcy cases to prevent the public purse from paying for the clean-up of massive western strip mines with taxpayer money. With the emergence of Peabody Energy from bankruptcy in early April, we’re celebrating a major victory!

Here’s how it started

The gusher of coal bankruptcies began around 2012, with the bankruptcy filings of 50 smaller companies mostly based in Appalachia. During the eight months between August 2015 and April 2016, Alpha Natural Resources, Arch Coal, and Peabody filed for bankruptcy. In 2015, those three companies produced about 40% of the coal mined across the country.

Coal-fired electricity has become more expensive than power produced from natural gas and renewable sources. With competition eroding coal’s market, the coal companies sought to “reorganize” their businesses by slashing debts and restructuring contracts under the sweeping protection of bankruptcy law. Bankruptcy forces a reckoning regarding the valuation of a company’s assets, however. If a company has insufficiently valuable assets, it can’t reorganize and must liquidate its business to pay debts.

For more information on our work on coal issues, visit our Coal page.

This posed a big threat to the clean-up, or “reclamation,” of many mining operations, because the three companies had not put up any guarantee for the reclamation. Instead, Alpha, Arch, and Peabody posted “self-bonds” for the majority of their reclamation obligations. A self-bond is an unenforceable “IOU” for companies that are considered “too big to fail.” If a coal company meets certain financial tests, the company can promise to complete reclamation without turning over any funds to regulators.

We had to get involved

To protect the public interest in clean air, water, and reclaimed land, WORC and its member groups recognized the need to force the replacement of self-bonds through the bankruptcy process. That meant engaging in bankruptcy court.

“Bankruptcy should never be used as a haven for a huge corporation to escape its reclamation bonding obligations. Better financial assurance will protect taxpayers and neighboring landowners and will ensure that the mining company remains responsible for any clean-up costs.”

With bankruptcy counsel Jim Burghardt at Moye White LLP, WORC leaders and staff began figuring out how our community organizations could navigate bankruptcy court to protect the public’s interest in successful coal mine reclamation. Unlike most courts, the amount of money owed to you determines your heft and leverage. It was not clear that a bankruptcy judge would weigh our organizations’ interests at all.

There are several worst-case scenarios from a landowner perspective. First, companies could be unable to emerge from bankruptcy, resulting in liquidation of worthless self-bonds. Second, companies could evade their bonding and reclamation obligations with the blessing of a bankruptcy judge. Mine neighbors would be left with giant pits and the federal and state governments would be saddled with the cleanup bill. If the companies emerged from bankruptcy with self-bonds intact, they would face the same market conditions that undercut their business in the first place. Some coal companies have already filed for bankruptcy twice, and liquidated in round two. If that happened, mines could go unreclaimed notwithstanding now-worthless self-bonds.

What did we learn?

Like any campaign, WORC network staff and leaders recalled old lessons and learned new ones along the way. Here are a few:

Market pressure may send coal companies back to bankruptcy court sooner than they would like. Coal is subject to persistent pressures that restructuring can’t change. First, coal production has declined significantly since 2008. Second, coal-fired electricity is among the most expensive across many parts of the country. Third, capital markets are rushing headlong toward renewable energy. Despite these substantial headwinds, each of the bankrupt coal companies promised post-bankruptcy success. The companies relied on overly rosy projections that overstated the future prospects for the coal market. Despite the risk of a second bankruptcy, executives at Peabody assert their right to return to self-bonding after emerging from bankruptcy. Although we should savor the aversion of a mine cleanup catastrophe, the situation demands our continued vigilance.

For more information on our work on coal issues, visit our Coal page.