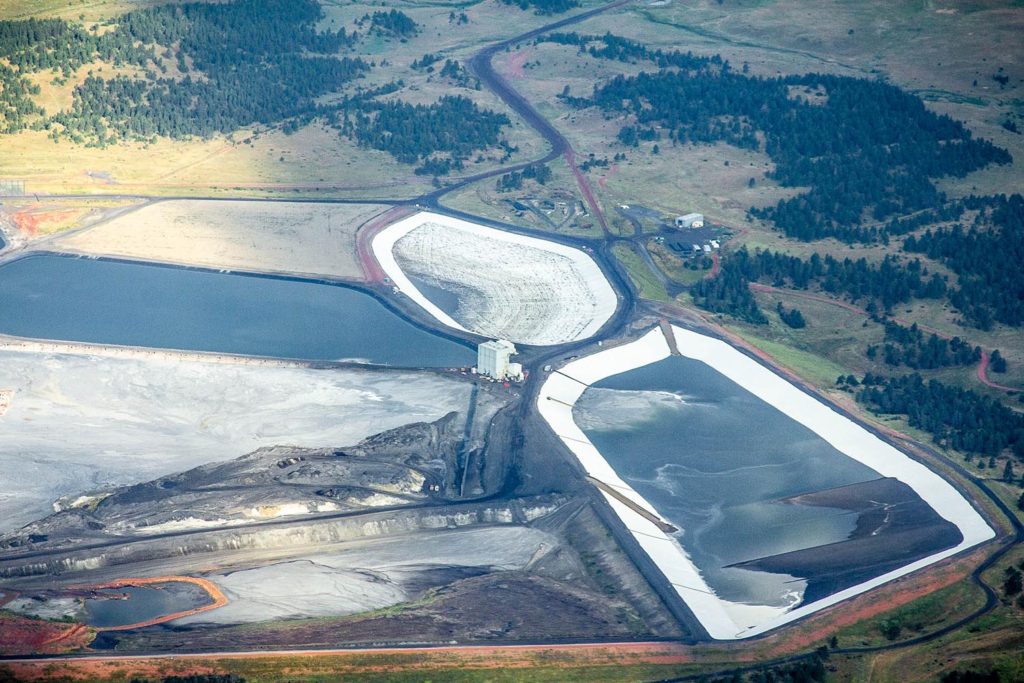 Northern Plains’ landmark study “Doing it Right II: Job Creation Through Colstrip Cleanup” shows how many good-paying jobs will continue if high-quality reclamation is done on its coal ash ponds.

Doing it Right means more than twice as many jobs

The report shows that a thorough “high and dry” cleanup approach (or “Doing It Right”) will create hundreds more local jobs than the industry’s preferred “cap-in-place” approach at Colstrip. For the first 10 years, Doing It Right would require an average of 218.2 full-time workers each year, whereas Talen’s cap-in-place cleanup would only create an average of 91.6 workers each year.  In other words, good cleanup that would permanently fix the groundwater pollution problem at Colstrip would result in an average of 126.6 more jobs per year than a risky cleanup plan that is unlikely to stop the contamination.

The first 10 years of cleanup encompasses closing the ash ponds and the next 40 years includes long-term operations, maintenance, and water treatment jobs. As with any remediation project, the initial construction phase is the most labor-intensive while the operations and maintenance phases requires far fewer, but highly skilled, workers.

Colstrip is a rural, isolated community in southeastern Montana that is defined by both its mine-mouth coal plant and multi-generational agricultural history. The 2094 MW Colstrip power plant and the Rosebud mine together employ approximately 803 FTEs (full-time equivalents).  The two facilities are mutually dependent on each other: the Colstrip power plant sources all its coal from the Rosebud mine and the plant is the mine’s only customer.

Hundreds of workers are facing potential lay-offs with the pending 2022 retirements of the plant’s Units 1 and 2 and the uncertain future of Units 3 and 4. The state of Montana estimates that the retirements of Units 1&2 will result in approximately 233 to 289 jobs lost between the power plant and the mine.

Like all coal-fired power plants, the Colstrip plant produces coal ash waste which is the by-product of burning coal. The plant stores this coal ash in a vast complex of “ash ponds” or impoundments. Some of the impoundments are wet ponds where the coal ash is stored with water and others are dry, where the majority of the water is removed from the coal ash slurry prior to storage. At over 800 surface acres, the Colstrip ash pond complex is one of the largest in the country.

Colstrip is also similar to most power plants because its ash ponds are leaking and contaminating the area’s groundwater. In fact, it was recently discovered through EPA filings that 91% of the country’s coal ash impoundments are contaminating local groundwater. At Colstrip, it is well-known that the plant’s leaking coal ash ponds have posed serious threats to water quality and ranch operations for decades. Wet ponds that intercept the groundwater table are the most likely to pollute water resources. The Montana’s Department of Environmental Quality has confirmed a conservative estimate that the wet ponds leak approximately 367 gallons per minute into the groundwater. This doesn’t even include the fresh groundwater that flows into the ponds, becomes contaminated from mixing with the coal ash, and then leaks out again.  Because coal ash leaches dangerous contaminants like heavy metals (selenium, arsenic, cadmium, etc.) and radium into water, this polluted water poses serious threats to livestock, wildlife, and people.

The town of Colstrip gets its drinking water from Castle Rock Lake, which is filled with water piped in from the Yellowstone River, so the ash contamination doesn’t currently threaten drinking water in town. Yet the impacts to groundwater are still significant and will be very dangerous should the capture wells turn off before the source of contamination is fixed. Local ranchers, the Northern Cheyenne nation, and Rosebud County homeowners continue waiting for the leaking to be stopped and the groundwater contamination to be cleaned up permanently.

Why do these jobs matter for Colstrip?

While this type of job creation would be welcome in any location, it would be especially impactful to the Colstrip community.  Firstly, the interdependence of the mine and power plant means that plant retirements are going to result in wider lay-offs throughout the community.  Secondly, Colstrip suffers from what noted economic geography experts describe as “double isolation” which makes it especially difficult for laid-off workers to find new work.  Double isolation refers to the fact that both the county and the plant within the county are geographically far from metropolitan areas which have a wider diversity of industries.  Communities located within larger, more economically diverse metropolises can offer more job opportunities to laid-off workers. Power plant workers can potentially find new positions at a manufacturing plant for instance. Double isolation, however, renders a coal plant community like Colstrip especially reliant on the coal industry and leaves workers with few prospects outside of the industry. This dependence tends to lead to socio-political support for the coal industry and non-local corporate owners – oftentimes at the expense of workers’ wellbeing.

The potential of cleanup jobs offers a sort of bridge between a community’s past of coal-dependence and a post-coal future. Good cleanup offers the kind of job creation that few other immediate and realistically viable projects can bring to an isolated or double-isolated community. Furthermore, in the case of Colstrip’s ash ponds, the cleanup must be fully funded by the coal companies, not by taxpayers. While cleanup jobs do not last in perpetuity and usually do not pay quite as well as lucrative plant jobs, they provide a much-needed additional decade or so for workers and communities to adjust to their changing economic conditions.

Finally, good cleanup has profound implications for the potential of a post-economy to take root and flourish. Few companies or workers want to move to a contaminated area with ongoing, toxic groundwater contamination where property values have plummeted and the water poisons the previously abundant wildlife populations. Colstrip’s other valuable industry, ranching operations, also depends on the adequacy of cleanup and whether the groundwater resources are restored to their pre-plant conditions. Thus, good cleanup provides numerous, long-term economic benefits that foster a resilient future for the entire community.

Of the 733 coal ash impoundments (landfills and ponds) in the US that are required to report to the EPA, 91% are contaminating nearby groundwater sources. There are hundreds more legacy impoundments (sites which stopped accepting new coal ash before the 2015 federal coal ash rule was enacted) which do not have to report groundwater contamination data to the EPA.  How these hundreds of impoundments are handled in the future has profound impacts for the host communities. The downturn of the industry will likely hurt workers and communities far more than corporate owners who often walk away scot-free – and it is the workers and communities who need resources and opportunities to adapt to this rapidly changing energy economy. The High and Dry cleanup approach is needed in far more places than just Colstrip.  In almost every power plant community across the US, it will protect water and land resources, and provide far more jobs to host communities than a cheap, insufficient cap-in-place plan that only benefits utility owners and corporate interests.

Is Cloud Peak Using BIA to Force Crow Family to Give Up Their Land to Mine Coal?