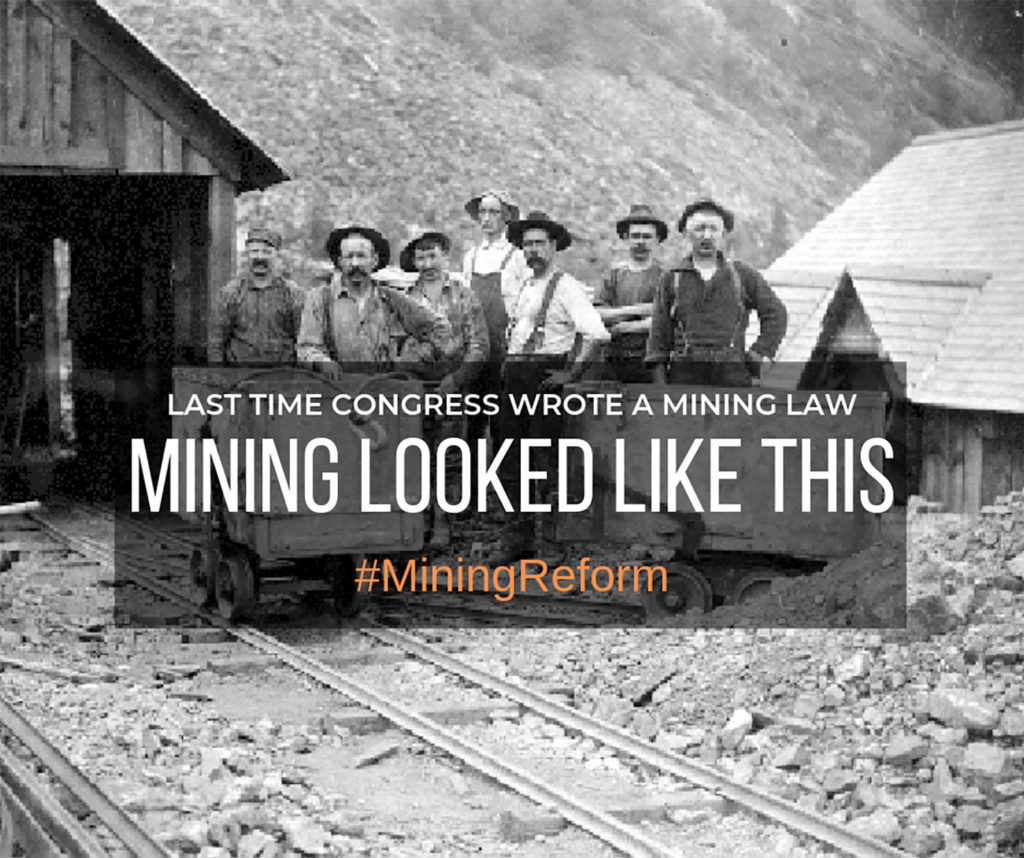 Legislation Introduced in both House and Senate aims to collect royalties from minerals mined on public land and ensure that hard rock mines are cleaned up.

During a May 9th press conference, Congressman Grijalva (D-AZ) and Lowenthal (D-CA), along with Senator Udall (D-NM) announced the reintroduction of their respective legislation to reform hardrock mining. The legislation would replace the General Mining Law of 1872, which is still in effect and governs mining for hardrock minerals such as gold, copper and uranium on publicly owned lands. The press conference was followed by a House Natural Resources subcommittee hearing featuring western voices urging reform, including Indigenous activists and leaders from Alaska, Arizona, Nevada, and New Mexico; a former Black Hills gold miner; a current county commissioner from Colorado; and members of the Yellowstone Gateway Business Coalition.

“Gold, silver and other hardrock minerals currently yield no royalties, but that can change. Abandoned sites can be cleaned up; special lands can be off-limits; and taxpayers won’t be shafted.”

Hardrock mining on our public lands is still governed by a law that was created when Ulysses S. Grant was president. Under the 1872 Mining Law, the hardrock mining industry can extract gold, silver, copper and other minerals from public land for free, without paying any royalties, unlike the coal, oil, and natural gas industries. The hardrock industry is also elevated in land use status ahead of other uses of public lands, yet is known to be one of the most heavily polluting. The Environmental Protection Agency estimates that roughly 40 percent of western headwaters have been contaminated by acidwaste drainage from hardrock mine sites.

“Pick axes are no longer standard equipment for hardrock mining, yet the 1872 Mining Law still governs hardrock mining on public lands today. American taxpayers will see the benefits when this antiquated rule is updated by the Hardrock Leasing and Reclamation Act of 2019,” said Linda Weiss, Western Organization of Resource Councils Board Chair. “The House bill would transition the archaic law to a leasing system resembling that for industries such as oil, gas, and coal. Gold, silver and other hardrock minerals currently yield no royalties, but that can change. Abandoned sites can be cleaned up; special lands can be off-limits; and taxpayers won’t be shafted.”

Not only do taxpayers lose because mining companies do not pay a royalty to extract minerals (even while making millions of dollars per year), they have also been left with hundreds of thousands of abandoned mines that will cost an estimated $54 billion to clean up.

“Since the 1872 bill was passed, hardrock mining has received preferential treatment while the environment and the taxpayer have suffered,” said Alan Anderson, a retired U.S. Forest Service Ranger and former Black Hills gold miner. “Mining is important to our country for many reasons, but in this changed world, it is time for a new mining law. The Hardrock Leasing and Reclamation Act of 2019 would increase protections for our lands and waters, and give the public more choice in how our precious lands will be used. It will also try to ensure that some mining profits go to practical land mitigation, restoration and the cleanup of past excesses. It makes sense. It’s time.”

Senator Udall’s bill directs the Department of Interior to review areas that may be unsuitable for mining and should be withdrawn from mining eligibility. H.R. 2579, the bill put forward by Representatives Grijalva and Lowenthal, specifically outlines land and water designations where mining operations should be off-limits, such as national parks, monuments, and wild and scenic rivers. Both pieces of legislation also require meaningful consultation between federal government agencies and tribes prior to the permitting of mining activities that will impact tribal communities. The House bill draws upon Grijalva’s recently-introduced RESPECT Act (H.R. 2689).

“Since the 1872 bill was passed, hardrock mining has received preferential treatment while the environment and the taxpayer have suffered.”

Although the Udall and Grijalva/Lowenthal bills have different approaches, both would update the current law to provide a structure that gives financial and environmental certainty to both corporations and taxpayers. Each would establish a dedicated hardrock minerals reclamation fund. Notably, both bills also end the preferred status that hardrock mining enjoys on public lands, making hardrock mining equal to other land uses such as recreation, grazing, and energy development.

After almost one hundred fifty years, it’s well past time to update the Mining Law of 1872. These bills have the potential to put mining companies on a level playing field with other extractive industries, including limiting their opportunities to unload costs on taxpayers. Royalties collected will also help rural communities mitigate mining impacts, while bolstering their local and regional economies. The law will also ensure that critical watersheds are protected, a priority for an increasingly parched West and establish a fund for cleaning up the messes that mining companies leave behind. As mining continues its march into the 21st Century, it’s time for the law to catch up.