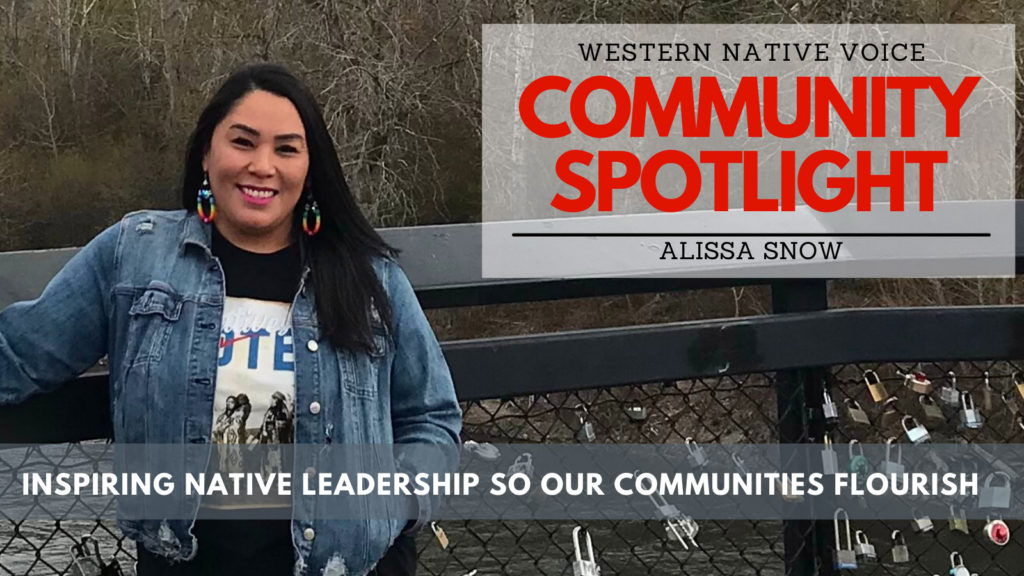 We are excited to share with you Western Native Voice’s Community Spotlight, designed to highlight grassroots organizing and individuals creating change from across Indian Country.

This month, we would like to introduce Alissa Snow. Alissa got her start in Montana politics registering voters as a community organizer for Western Native Voice. She soon after became the State Field Director and Montana’s first full-time Native woman lobbyist. Alissa helped to create, pass, and implement state law that protects the culture of Montana’s Indigenous people. She played an integral role in passing historic Native healthcare legislation and helped to increase voter participation across Montana’s tribal nations.

Here is her story in her own words:

My name is Alissa Snow. I am an enrolled Blackfeet member. When someone asks me where I am from, it’s complicated. I answer by saying I live in Missoula but grew up in Browning and Fort Belknap. My mother was enrolled in the Blackfeet tribe, and my dad is Gros Ventre from Fort Belknap.

Where did you go to school? What was your childhood like?

Because my parents were from different reservations, I would start the school year in Browning and finish it in Fort Belknap. Although I had good grades in school, I didn’t have a good support system at home. Growing up, I started spending more time with my mom in Browning. She was a single mother for a long time before she got remarried. During that time, I had to deal with homelessness and her addiction issues, but I was happy as long as I was with my family. That is how it was, and I didn’t know any different. I had two children by the time I was 17 years old and was almost doomed to repeat the same thing. I ended up dropping out of school. I was a very shy person, very quiet, and a stay in the background type. But then, things changed when my sister got her GED, and she told me to get mine. I didn’t even know what a GED was or why I was getting it, but I got it because she told me to. After I learned what it was, I realized this was a huge step and that I did a good thing. I became proud of it. That was the first time I realized I could do something.

Who were your role models growing up?

I didn’t have a lot of role models growing up. But, when I turned 18 and moved to Fort Belknap with my dad, he wanted to get his degree, so he enrolled in tribal college. He encouraged me to sign up even though I didn’t have a plan, and I wanted to start working on a better life for my kids and myself. I put my whole life in schoolwork at that time while my grandmother watched my kids. My dad and I were both going to college at the same time, and I received good grades. I wanted to go into social work, and it seemed like it fit because I liked to help people. Then, one of my instructors encouraged me to switch to computer applications.

Tell us about some of the roadblocks you faced.

In 2003, I felt myself getting stuck in the cycles of addiction and alcohol, so I moved to Missoula. I stayed with my relatives until I could find a place to live. I didn’t have a vehicle or a home. But it was some of the best times because I got off the rez and got away. The possibilities seemed endless there.

“I had to stop going to school for so many reasons: funerals, addictions, taking care of kids. Going to school was something I did when I had time. We should always prioritize our family and our health.”

In 2008, I started taking classes for nursing. There were so many things I wanted to do for work, so I did a little bit of everything. In my 2nd semester, my mom passed away from overdosing on pain pills. I had younger siblings, and I had to take care of them. I had a trip planned to Disney and ended up taking them all. I wanted to show them that there was so much more out there. It showed them a different kind of life. At that time, I had to withdraw from school. It would be the first of many times. After a while, I went back and went into social work. It took me a long time to graduate, but I finally did in 2016. School should be at your own pace because we lead different lives. We shouldn’t feel like we are obligated to finish in a certain amount of time.

Tell us about any volunteer projects or offices held that you are proud of. How did you get started?

As my confidence grew, I became more involved in my second year of school. I sat on the Head Start committee. Then, someone nominated me for student council Vice President, and I ended up winning. I didn’t even think anyone knew who I was. But, it gave me even more confidence. That year, I was chosen to go to DC to lobby for tribal college funding. I was 20 yrs old, and I had never been on an airplane. I had never even left the state in my life, and I ended up flying by myself. I didn’t know what I was doing. Luckily some nice ladies from the Crow tribe took me under their wing, helped me get through the airport, and showed me the ropes. When I got to D.C., I met with people and told my story. It was then that I realized I had a voice, I had a story to tell, and I could help other people. That experience taught me that I could overcome my fears. I felt that If I didn’t do it, no one else would. I felt an obligation to do it. The feeling of accomplishment helped me grow, and I realized that I am capable.

When did your life start to change?

In 2014, while living in Missoula, someone sent me a job description for Western Native Voice. I applied for a community organizer position even though I was still afraid to talk to people. I didn’t even know what it meant to be a voter, so I learned from scratch. I had to believe in it myself. This change maker was the beginning of who I am today. I then became the field director, where I ran the Native vote program, where 70% of my job was on the road. I went to every reservation in Montana. Later, I was offered an opportunity to work for the Fort Belknap tribe, and helped open the first-ever public relations office, and helped with legislative issues. From there, the Democratic party reached out and asked me to run the Native vote program. I was nervous at first, but I had a great team and a lot of support.

No matter how old you are or where you live, policy impacts us all. Young people need to think about what changes they want to see in their communities. We need to teach young people to see the connection between voting and the issues that matter to them and their future.

Our young people need to understand that the people we vote into these positions are making decisions for them. They need to vote for someone that cares about the best interest of Indian Country.

What are you doing now?

I am currently a policy analyst and lobbyist for Fort Belknap. A co-worker and I also decided to start a business, Red Medicine, LLC. We work to build political power in Indian County by getting out the vote. Our goal is to break down important information and make it understandable to people back home. Once you get involved in this work, it becomes your life.

“I became the first Native woman lobbyist in Helena, and it was empowering.“

I have been asked to run, but I am not in the place to do that yet. I am working at building a voter base right now and am happy being in the background. When I decide to run, my three options are the state legislature, a country commissioner or election office, or a tribal office.

Tribal government needs to be involved in state government. It’s hard to get tribal leaders to pay attention. I would like to see each tribe hire a lobbyist/policy/analyst/organizer and get the community involved as well. My empathy is strong for my people, and going back to the rez isn’t always easy.

“I want our people to make voting a family tradition.“

What changes would you like to see in your community within the next five years?

My vision is to have Native vote turnout higher than the rest of the state. I want to see more Natives walking the halls in Helena.

Access to healthcare is what drives me, so I want to leave behind a world where our people don’t have to choose between paying rent, paying doctor bills, or being able to go to the hospital when they need to.

When I get asked about my work, how I got where I am today, and what drives me, I always, ALWAYS, start from my childhood. I lay out a long timeline of trials and tribulations, strength and perseverance, and I am candid about addictions and issues that aren’t always my own but impacted me just as much. Everything I have been through, good and bad, has helped me become the person I am today. I have very few regrets because every single experience was a learning experience, and I’ve learned to make my own silver linings.

I just want people to know that I’m not trying to get sympathy, nor am I trying to make anyone feel bad, guilty, or embarrassed. What I’m hoping comes from the sharing of it all, the highs and lows, is that someone else will be inspired by it, not feel bound by generational cycles or other people’s low expectations.

“We all have the potential for greatness within ourselves, no matter our start in the world. And it’s never too late to realize that.“