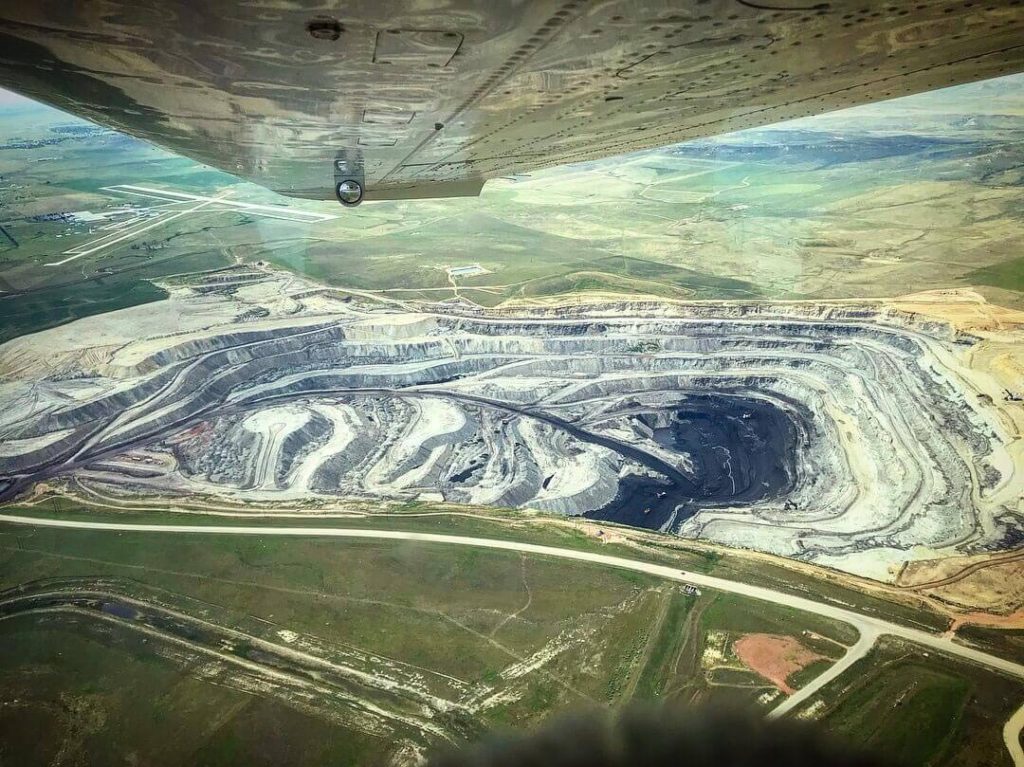 Interns Sophie Watterson and Kate Manzer Ride with EcoFlight on their journey to learn the real, lasting impacts of coal mining in the west.

Climbing into a six-seater propeller plane is like loading up for a road trip – except the interior of the car shrunk and you’re about to go 3,000 feet into the air. Our stomachs filled with butterflies as the plane’s engine came to life and the ground retreated from under us. But once we were in the air, we found that smiles had crept across our lips and we couldn’t wipe them away. From our little sedan-in-the-sky, we could see the coal mines of the Powder River Basin from a new perspective. Though at a distance, coal mines may look like scratches on Earth’s surface, we realized that by leaving land unreclaimed, the coal industry could be making permanent scars.

This wasn’t our first time viewing coal mines in Montana and Wyoming. Shortly after starting our internships with WORC in June, we traveled into the Powder River Basin by car to become acquainted with some of the mines we would be studying for our summer project: a report on the status of coal mine reclamation in the western United States. The purpose of this report is to identify why reclamation is not happening in a more timely manner (the law requires it to be “contemporaneous” with mining) in order to advance the conversation with mine operators and regulators, who have the opportunity to prioritize reclamation work while mines are still operational and profitable. Our report features the results from months of data analysis on reclamation activities and bond release in Wyoming, Montana, Colorado, North Dakota, New Mexico, Utah, and on Black Mesa, on Navajo and Hopi land in the state of Arizona. We have analyzed states, mine operators, and individual mines, creating over 300 graphs to visually represent our findings. Our report also suggests policy and operation changes that regulatory agencies could make to improve the reclamation process across the western United States.

From the air, you can tell just how big a coal mine is. The half million-pound haul trucks look like tiny beetles in the massive pits and the highways look like lines in the dirt.

While on that original coal mine tour, we viewed several mines’ activities from their perimeters by standing on the roof of our car while mammoth trucks screamed by us, wishing we were just a bit taller. It was difficult to understand the extent of disturbance since we could barely peek over the edge. From this skewed perspective, we could tell that mines were large, but not how large. We would later learn that mines had a lengthy and complicated history, including the dramatic change in the market for their product that has led to the long decline that the industry finds itself in.

Our summer continued, first by researching these mines’ histories, then analyzing their reclamation progress, and finally evaluating the regulatory framework for reclamation. We spent hours on our laptops scrutinizing satellite imagery of the mines on Google Earth to get to the root of the problem: why was there so much unreclaimed land? Each day in the office, our work helped us to understand these mines in greater depth. However, the full purpose of our report didn’t become clear until we were in the air.

From the air, you can tell just how big a coal mine is. The half million-pound haul trucks look like tiny beetles in the massive pits and the highways look like lines in the dirt. Mined areas span for miles on end; the distance from the western to the eastern edge of the Rosebud mine in Colstrip, Montana, is more than a half-marathon – a length that is hard for most people to conceptualize. Coal mine reclamation is challenging to address because the scope of the issue is similarly hard to fathom. There are a variety of factors which may impede reclamation – changes to the mine plan, insufficient incentives, declining markets for coal – and sometimes we still feel like roadside observers peeking in as this giant problem unfolds. However, we know that as citizens, we can demand more of industry executives and our regulators. While the task of coal mine reclamation may be daunting, we’ve inspected it from a variety of perspectives, and we’re ready to propose the next steps.

In many ways, our evolving perspective on coal mines is a metaphor for our experience as interns in these past few months. Our project at WORC was originally something that we understood only on the surface level, but now we have a deeper understanding of our importance as individuals in the realm of this organization  and the importance of the coal industry in the western United States. As the summer nears its end, it feels like we are coming in for landing, but we will not be leaving our high-speed adventures behind us. Hopefully, our report will carry this momentum forward, creating a better-informed public that will make coal mine reclamation a priority.

Read more coal stories here. And check out some of WORC’s previous reports on coal mining and other research here.