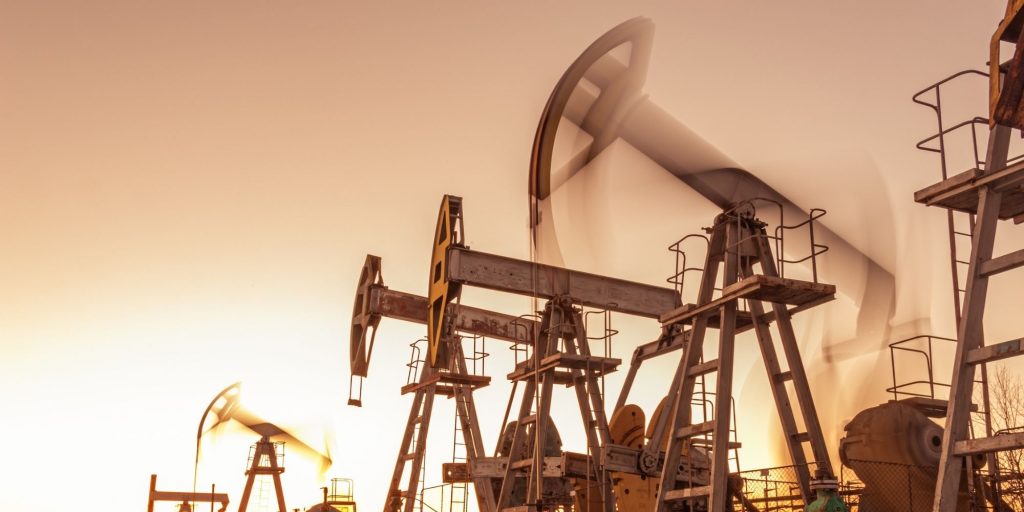 Above: Oil wells churn out oil throughout the West, and operators are enjoying record profits. Can drilling more wells and adding infrastructure that may take years to produce really be the answer to short-term shortages?

Why giving the oil and gas industry a free pass to ramp up production won’t fix the crisis and may lead to larger problems down the road.

The recent events leading to the violence and suffering of the Ukrainian people has awoken the world to the brutality and instability of Putin and his regime. But something else has become apparent in the last several weeks: big oil will never let a crisis go to waste. The oil and gas lobby, and their supporters, have left no stone unturned when it comes to spreading disinformation that more subsidies for domestic oil producers is the solution to the war in Ukraine. Against the backdrop of expensive television and print ads and political posturing, we’re here to give you the facts.

By simply saying “let’s drill more oil” what you are actually hearing is “let’s double down on our country’s broken oil and gas system.” Our current system allows for great wealth for a few, uninhabitable living conditions for others, and irreparable environmental damage for all. As we prepare for what is likely to be the ultimate bust of this industry, this is no time to add to the growing crisis of orphaned wells across the country and the irreversible harm caused to communities and the ecosystems located near development. The more we subsidize financially insecure producers, the more we prolong this flawed system and leave American taxpayers with the bill for cleaning up industry’s messes.

The real and obvious solution to global dependence on Russian and many other authoritarian regimes’ oil is to decarbonize the economy. Rethinking our country’s energy security strategy by investing in renewable energy, electric vehicles, and battery storage would allow consumers to count on predictable, low costs over long periods of time and save people nearly $3 trillion dollars over the next 30 years. Eliminating the need for imported foreign fossil fuels would reduce America’s exposure to the volatility of the fuel market, enhance overall resilience, and lessen the worsening impacts of climate change. While we recognize that the clean energy transition can’t happen overnight, now is the time to be thoughtful about how we extract fossil fuels and the role it plays in our lives. Here’s why drilling, permitting and exporting more federal oil and gas on public, private split-estate, and tribal lands isn’t a solution to ongoing international tensions.

A common industry talking point is that the recent rise in gas prices has been made worse by a failure by the Biden administration to auction off enough oil and gas leases and approve enough permits. Here’s the reality: President Biden has approved more oil and gas permits in his first year in office than Trump did in each of his first three years as President. U.S. oil and gas production was at record highs before the pandemic. Due to economic forces, production has declined in the past two years but is rebounding and some analysts predict the newest surge will break previous records.

While the industry is insisting on new subsidies and streamlined leases, many companies are already sitting on thousands of undrilled leases and enjoying the highest profits companies have seen in nearly a decade. Due to our country’s outdated oil and gas leasing system, nearly half of the 22.1 million actively leased acres on federal, tribal, and split-estate lands are currently sitting idle, generating hardly any income for taxpayers, and preventing other beneficial use of the land. The federal royalty rate has not been updated in over 100 years and has caused federal taxpayers to lose billions of dollars from oil and gas leases. What’s more, many oil and gas wells on these lands are already insufficiently bonded, and new wells permitted under our current system are likely to leave taxpayers with the cost of cleaning them up. In these times of high demand, you would think that companies would be drilling more oil, but many companies are reluctant to scale up production further due to increased financial industry pressures, lack of workers, and simply enjoying cash flow from rising oil prices. In fact, influential oil and gas players like Pioneer Natural Resources, CoDevon Energy Corp., and Continental Resources Inc. recently pledged to limit their 2022 production. Pioneer’s CEO, Scott Sheffield recently told Bloomberg News, “Whether it’s $150 oil, $200 oil, or $100 oil, we’re not going to change our growth plans.’’ Other oil giants like Exxon Mobil and Chevron announced they plan to increase production immediately but warned that we wouldn’t see that oil at the pump anytime soon.

Putin’s war against Ukraine is happening right now, and any development of new oil and gas infrastructure to increase production will not be completed in time to have any effect on this current crisis. “If someone starts drilling oil wells today, the increased supply might be 6 months, 12 months, even years away,” said Pavel Molchanov, an analyst at Raymond James in an interview with CNN. Hiring workers, setting up the rig, drilling, extracting, shipping, refining, more shipping, and retail all take time.

Additionally, U.S oil and gas production is just one cog in the gears that drive the global oil and gas market. Over half of the world’s oil supplies are controlled by OPEC Plus, a group of 23 oil-rich nations, led by Saudi Arabia and Russia, which does not include the United States. OPEC Plus has a huge amount of control over global oil production and prices. Less than a week after Russia’s invasion of Ukraine, OPEC Plus producers decided to keep oil prices high by maintaining a modest increase in oil production. Expanded U.S production cannot make up the difference.

There’s a misunderstanding about our capacity to export more oil and gas to other countries to lessen dependence on Russian products. Many don’t realize that the oil tankers used to transport oil around the globe are essentially full. Likewise, while one new export terminal opened in Louisiana this year, European terminals have limited capacity to absorb any extra supply. Increased investment in fossil fuel infrastructure isn’t a real solution as it will take years to build and would leave the United States and the global community even more dependent on volatile fossil fuel markets as keystones to their economies.

“As long as domestic and international energy markets depend upon oil and gas, Russia and other bad actors will be able to weaponize their exports.”

As long as domestic and international energy markets depend upon oil and gas, Russia and other bad actors will be able to weaponize their exports. By exporting more American oil and gas to Europe, we would further entrench infrastructure and investment in volatile fossil fuels, risking stranded assets and energy insecurity. If we’re going to make long-term energy infrastructure investments, they should prioritize technology that will decrease the global economy’s over-reliance on fossil fuels. The best way to lower energy prices and break from this vicious cycle over the long term is through investments in renewable energy, weatherization and other efficiency measures, and public transportation.

We know that increased fossil fuel consumption will only exacerbate the climate crisis, further damage a broken oil and gas system, increase the number of orphaned wells across the country, and escalate national security risks. We should follow the example of our European allies and invest in efficiency, solar, and wind, to build a reliable energy sector independent of petrol-state influence. In the short term, our leaders in Congress should focus on financial support for the victims of this war and work to wean the private sector off public minerals. As rural western Americans, as landowners, consumers, neighbors, and advocates, we call on our leaders to focus on real solutions.

Send me the WORC’s newsletter

Biden Administration Must Take this Opportunity to Protect Oilfield Communities