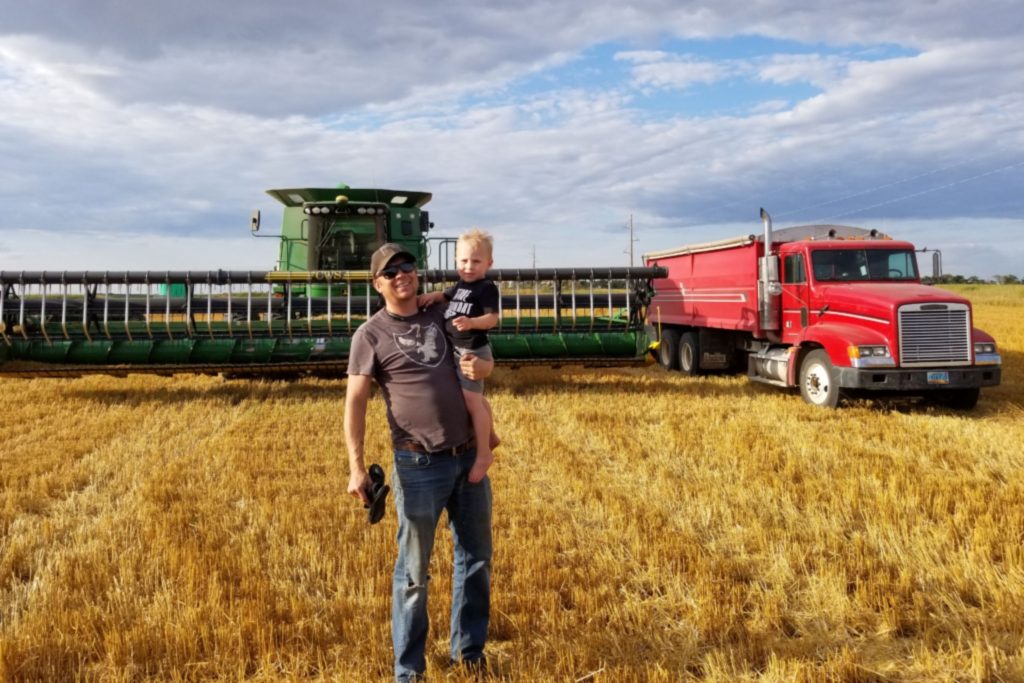 Narrative project elevates the voices of North Dakota farmers and ranchers as they battle both Trump’s trade war and the fallout from the pandemic.

Earlier this year, Dakota Resource Council launched its newest social media storytelling project, Farmers and Ranchers in Crisis. This project takes a personal look at the stories of farmers and ranchers across North Dakota who have been affected by economic and weather-related crises over the past few years.

The project started by looking at the stories of commodity farmers who were affected by the trade war, but, after months of research and interviews, and as the COVID-19 crisis devastated the agriculture commodity futures market, it became clear that the impacts facing producers went beyond the trade war with China.

Farmers and Ranchers in Crisis consists of a series of blogs and social media posts that tell the stories of producers throughout North Dakota impacted by decisions made in state capitols and Washington D.C. In DRC’s view, farmers and ranchers are the backbone of North Dakota rural communities, and their stories must be told so decision-makers in Washington DC understand how the choices they make impact real people and communities. Farmers and Ranchers in Crisis can be found at ndfarmcrisis.com and DRC’s Facebook page.

Here are a few of the stories that Farmers and Ranchers in Crisis has already published. Keep on the look-out for more stories to come.

“The farmer is the only person in our economy who buys everything at retail, sells everything at wholesale, and pays the freight both ways.” -John F Kennedy

Sometimes words spoken years ago still ring true. Just as problems in our food supply system become more apparent, Dakota Resource Council interviewed farmers and ranchers across North Dakota to hear about their experiences as producers in these changing times. COVID-19 has been an economic disaster for our farmers and ranchers but real problems for farmers began before the pandemic when the Trump administration decided to disrespect and grossly underestimate the power of our largest trading partner, China. This futile effort to re-establish American dominance in the region caused unintended consequences and collateral damage to our nation’s farmers. In this the first part of our 3-part series, we present “Farmers and Ranchers in Crisis: Part-1 The Trade War Stories.”

Todd Leake Lives in Emerado North Dakota about 20 miles west of Grand Forks outside of the Grand Forks Air Force Base. With the help of his brother, son and of his wife Sue, Todd farms 1500 acres and grows Hard Red spring wheat, Durum wheat, soybeans, a variety of dry beans and sunflowers.  Todd is a longtime DRC member who has advocated and farmed for years in North Dakota

The Nature of Farming

“Every farmer wants to get paid for producing versus just getting a check from the government. We don’t farm to get handouts”  -Bill Hejl

Any good farmer will tell you that the good years have to pay for the lean years if you want to make it long term in the industry. Every farm that starts up must come up with strategies to get around risk. Droughts can kill or reduce yields, floods can make it tougher to plant acres of crops or access your fields, and an early snow can make it impossible to harvest your crops. Farmers try to get around this by purchasing crop insurance to negate some of the risk. Bank loans provide constant cash flow under the assumption that the farmer will sell the crops at the end of the harvest season and pay off the loan. The result is a system that is a house of cards and these cards are set up on a foundation of two things that should always remain stable, market prices and stable markets to sell them in.

“You would be much amused with the animals ‘round the ranch.”― Theodore Roosevelt, Letters to His Children

North Dakota has a rich history of ranching. It was on a ranch that Teddy Roosevelt found himself. It’s a lifestyle that encourages innovation, individualism, and a sense of pride. There are 1.83 million beef cattle currently in the state, roughly two cows for every North Dakotan. Despite these numbers, ranchers are often overlooked when issues like the trade war with China and Covid dominate the headlines. In previous installments we talked about droughts, Covid-19, and trade wars which are issues that have affected farmers and ranchers. In this article we’ll cover the issues specifically that ranchers face. Meat packing companies have been playing with market prices; beef producers and consumers are being taken advantage of with no Country of Origin Labeling, and a beef checkoff system forces producers to pay money for practices that don’t serve their interests. Ranchers and consumers are being taken advantage of by an industry that has grown too large to control.

The Future of North Dakota

“The farmer has to be an optimist or he wouldn’t still be a farmer.” — Will Rogers

Farmers and Ranchers in Crisis started as a project to highlight problems in North Dakota due the trade wars and to fairly portray the seriousness of this crisis. One thing is clear, we are at a crossroads. Rural communities are dying due to migration and lack of services. Small farms are getting larger, oil and coal are facing a bleak future, commodities prices are falling, and overhead costs are rising. But these trends still have time to be reversed.

“If the game favored little guys a bit more, maybe they could stay on the farm a few more years, rather than going under. Once small farmers go under, they do not come back.”

Congress “Fails Ranchers And Consumers” by Approving USMCA Without COOL