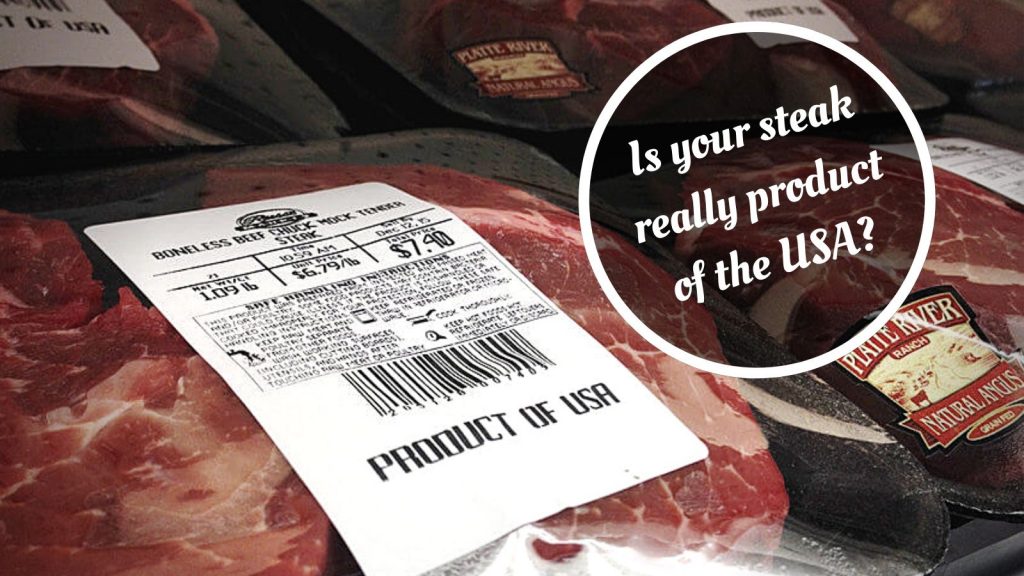 The U.S. House voted to approve NAFTA 2.0/USMCA on December 20, 2019 and the agreement is expected to pass the U.S. Senate and be approved by President Trump in early 2020. But it is missing an essential piece: It does not include Country of Origin Labeling (COOL) for beef and pork!

“While this agreement is being praised as an improvement over the original NAFTA, the lack of mandatory country of origin labeling shows that it’s just another trade policy that fails ranchers and consumers. A beneficial agreement would allow for transparency about where our food comes from,” said Wilma Tope a rancher from Aladdin, Wyoming, and member of Powder River Basin Resource Council.

The U.S. has required labeling of many food products, including fruits and vegetables, for decades, but did not require labeling of beef and pork until the 2002 Farm Bill. Producers saw record prices for beef cattle after COOL was fully implemented in 2014. Meatpackers fought COOL every step of the way and pressured Canada and Mexico to bring a formal complaint against the labeling law to the World Trade Organization (WTO). Congress gave up some sovereignty and repealed COOL for beef and pork in 2015 after the WTO ruled that the U.S. law violated free trade agreements and threatened monetary penalties.

“While this agreement is being praised as an improvement over the original NAFTA, the lack of mandatory country of origin labeling shows that it’s just another trade policy that fails ranchers and consumers.”

“Restoring mandatory COOL in USMCA would benefit both ranchers and consumers. Currently, imported meat labeled ‘Product of USA’ betrays American ranchers, consumers and our rural communities. Consumers deserve the right to choose beef and pork from the U.S., and ranchers deserve the right to an honest market.” said Jeanie Alderson, rancher from Birney, Montana, and Chair of Northern Plains Resource Council.

Since the repeal of COOL, cattle producers have seen their prices decline significantly, while meatpackers pocket the difference through market manipulation and integration of domestic and international beef supplies. WORC and its member groups had hoped to see a renegotiated NAFTA bring back mandatory COOL.

“Reworking the deal with Canada and Mexico at the table was the best way that we could implement COOL without triggering tariffs or another dispute with the WTO, and we lost that opportunity with this deal.  Consumers are missing an opportunity to choose the predictable quality that only U.S. Beef can provide,” said Curt Kralicek a rancher from Manning, North Dakota and Chair of Dakota Resource Council.

Today’s agricultural economy has stopped working for producers. Consumers are willing to pay a premium for American beef because they want high-quality products that support U.S. producers. Yet, cattle prices are far below the cost of production. Meatpackers are no longer required to label all beef and pork that’s born, raised and slaughtered in the U.S., and a loophole in U.S. Department of Agriculture (USDA) regulations allows imported beef and pork to be labeled “Product of the USA.” These deceptive labeling practices allow corporate meatpackers to net record profits at the expense of both consumers who pay a premium for what they think is American beef and the U.S. ranchers who raise it.

Although NAFTA 2.0 does not provide a pathway for COOL to be reinstated, the fight isn’t over to restore fairness for hard-working U.S. ranchers and consumers. In recent months, three pieces of legislation have been introduced which attempt to reinstate mandatory COOL or to close the Product of the U.S.A. loophole.  Sen. Jon Tester from Montana introduced a COOL Resolution which calls on Congress to reinstate COOL. Senators Mike Rounds and John Thune, both from South Dakota, introduced the U.S. Beef Integrity Act, a bill to amend the Federal Meat Inspection Act to modify requirements for beef to bear a “Product of U.S.A.” label, and for other purposes.

“Consumers are missing an opportunity to choose the predictable quality that only U.S. Beef can provide.”

Sen. Cory Booker from New Jersey introduced the Farm System Reform Act which is the most comprehensive of the three proposals and would reinstate mandatory COOL for beef and pork and add dairy. This bill also updates and reforms the Packers and Stockyards Act to help combat monopoly power and price manipulation in the livestock industry. Additionally, it would put a moratorium on new construction of large factory farms and phase them out completely by 2040.

In addition to the legislation in Congress, there is movement to address false labeling at the USDA. The United States Cattlemen’s Association submitted a petition to the USDA requesting that the FSIS revise its Food Standards and Labeling Policy Book to limit the use of certain voluntary labeling claims, such as “Made in USA,” “Product of USA,” and “USA Beef,” to meat products derived only from cattle born, raised, and slaughtered in the United States.

WORC is working with members across the region and allies across the country to build public support for reinstating mandatory COOL and closing the Product of the U.S.A. loophole.  Will you join WORC in this fight to restore fairness in the cattle markets and transparency in meat labeling? More than 500 folks have signed our petition to reinstate mandatory COOL and close the Product of the USA loophole. Have you?

Sign our petition in support of accurate labels for meat and fair prices for U.S. ranchers.

We’re Importing Beef And Labeling It “Product Of The USA”