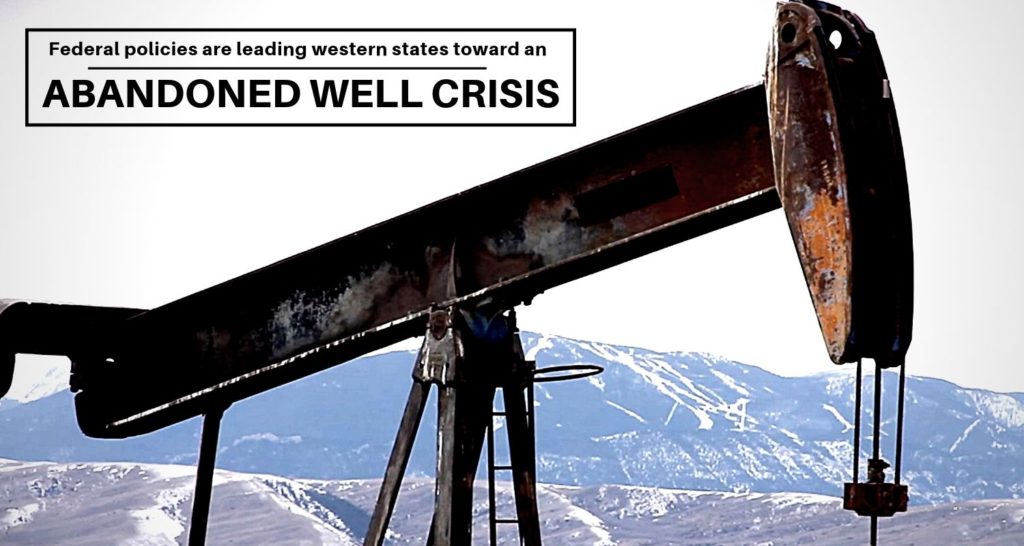 Federal oil and gas leases have been offered at a record pace, and for record low prices, over the past two years. The Trump Administration’s “Energy Dominance” agenda has meant efforts to significantly weaken standards that were designed to protect taxpayers, such as rolling back requirements for companies to pay royalties on wasted publically owned natural gas, cutting the time the  Bureau of Land Management (BLM) has to review applications for permits to drill (APD’s), and shortening or eliminating opportunities for public input.

While these efforts capture the news cycle, a different narrative is playing out in states across the West. Over the past two and a half years, mostly Republican-controlled states with oil and gas production have not been working to speed up production, but to strengthen environmental and taxpayer protections, particularly around financial assurances from operators. Between an industry already prone to booms-and-busts and signs of economic slowdown, regulators and legislatures are working to make sure taxpayers are not on the hook for further cleanup of the growing amount of abandoned and “orphaned” oil and gas wells. Significant increases in bonding requirements for oil and gas companies are being proposed in North Dakota, South Dakota, Alaska, and Colorado, while official discussions and oversight are ongoing in Montana and Wyoming as well.

Between an industry already prone to booms-and-busts and signs of economic slowdown, regulators and legislatures are working to make sure taxpayers are not on the hook for further cleanup of the growing amount of abandoned and “orphaned” oil and gas wells.

When coal companies apply to the federal government to dig a new mine they are required to estimate the cost to clean up and reclaim the mine, then hand over financial assurances that would cover the cost of that cleanup to state governments. In the event that the company responsible were to dissolve or disappear, the government would cash the funds to pay for cleanup without using taxpayer dollars. In the world of oil and gas, this is rarely the case.

Most states, as well as the federal government, offer companies “blanket bonds” which cover either a specified number of wells, or all wells across a particular state or lease. These can range from $30,000 for an unlimited amount of wells under 5,500’ in South Dakota, to $100,000 for up to 6 wells in North Dakota. While amounts vary, no government entity requires oil and gas infrastructure to be bonded at the actual cost of reclamation. In some cases, the bond level is nowhere close. For example, a September 2019 Government Accountability Office (GAO) report found that while the BLM’s typical reclamation cost for a low-cost well was $20,000, and $145,000 for a high-cost well, the average value of a bond held was $2,122 per well. While blanket bonds are commonplace, many states are beginning to reassess the amounts.

In August, North Dakota’s top elected officials proposed rule changes which would scrutinize “Temporarily Abandoned” wells, a status which state regulators see as indicating lower profitability and higher risk of being orphaned. The rules would also double the bond amounts for commercial disposal wells, a growing subset of wells. In response to 40 wells which were recently orphaned in South Dakota, state regulators proposed increasing bonds for shallow wells from $10,000 per well to $50,000 each. Idle, or temporarily abandoned wells, are also being targeted by the proposed rule changes. Alaska has particularly expensive wells to reclaim due to their remoteness, prompting state regulators this year to raise blanket bond amounts to between $400,000 and $30 million dollars.

Despite quadrupling the bond amount and establishing a fee on production to clean up old wells, Wyoming has 3,175 abandoned wells being tracked by the Oil and Gas Conservation Commission.

Insufficient bonding and reclamation assurances are troubling as economic signs point to a global economic slowdown, particularly in shale plays. Shale companies have long been in the red with years of negative free-cash flows. Wyoming is all too familiar with this situation and is still dealing with the consequences of a downturn in the coalbed methane gas industry boom in 2014. More than 6,000 wells were orphaned, with minimal bonds available to clean up the mess. Today, despite quadrupling the bond amount and establishing a fee on production to clean up old wells, Wyoming has 3,175 abandoned wells being tracked by the Oil and Gas Conservation Commission.

States are taking action to address the growing crisis of insufficient bonding and potentially massive taxpayer-funded cleanup — but where is the federal government?

In September, legislation was introduced to adjust the BLM’s blanket bond levels, which were created in the 1950’s and 60’s, to account for inflation over the past 60 years. While this is a good start, it doesn’t take into account modern, extreme drilling techniques that are far more expensive to reclaim. Even with these adjustments, nationwide and statewide blanket bonding aren’t enough and need to be phased out. Reclaiming thousands of wells from just one bankrupt company would quickly deplete those bonds putting taxpayers on the hook for massive cleanup costs. If the federal government can take a cue from forward-thinking state regulators, we may just avoid a crisis.