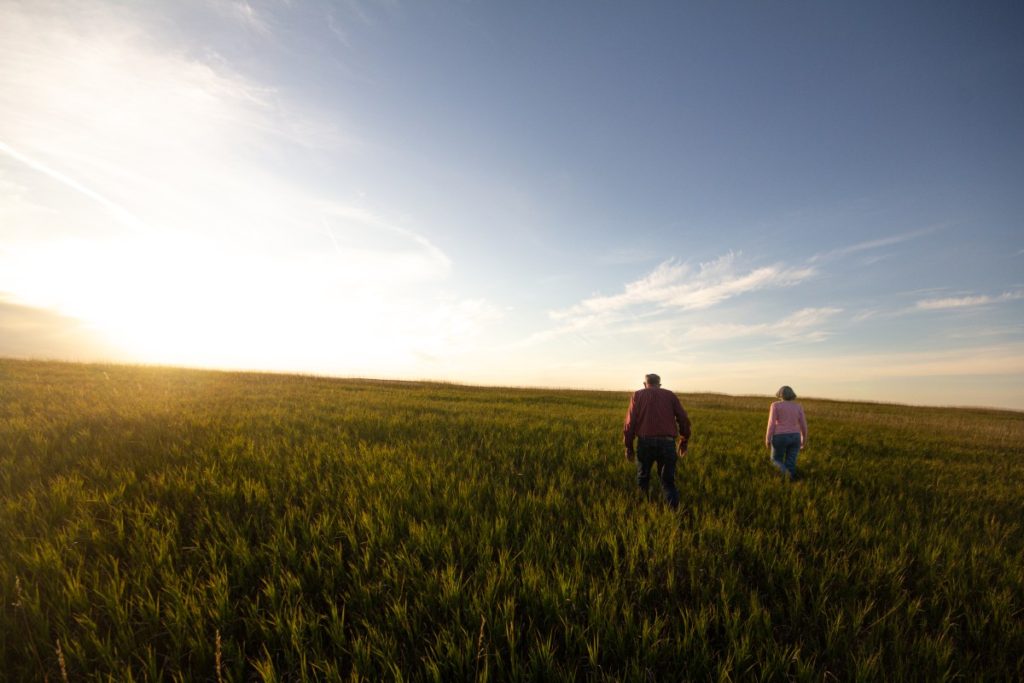 Above: Roger and Pat Ashley climb a hill near their property. Like many homeowners in the area, they had no say when a fracking rig began to drill at the end of their driveway.

Roger and Pat Ashley’s experience with a fracking well outside their home showed the disproportionate power the industry had in North Dakota. When a refinery threatened Theodore Roosevelt National park, they decided to do something about it.

This story was adapted from WORC’s Living with Oil and Gas project.

Roger and Pat Ashley moved to North Dakota in 1997. Originally from the Midwest and West, both Roger and Pat fell in love with the expanse of North Dakota along with the access to public land. “It’s nearly impossible to feel claustrophobic out here,” said Roger. They settled down on a homestead in between Belfield and Dickinson, just a half hour from Theodore Roosevelt National Park.

North Dakota’s unique beauty might be lost on some, but the Ashleys have grown to appreciate the parts of the state that are often overlooked. “In the spring, it is a sea of green and just to see the wind blowing the grass and the crops, it’s like waves on the ocean,” described Pat. The west brought the Ashleys a sense of solitude and freedom, however, the peace they once knew has since been disrupted by an oil well that was put in at the base of their driveway.

The Ashley’s house was the only home within a mile of that well, but because their home was just inches from being considered directly adjacent to the well site, they were not notified about the construction. “It was rather shocking for us,” said Pat.

Their home is located on a narrow road with blind hills that was quickly overrun by oil trucks and equipment. Feeling unsafe, the Ashleys brought their concerns to the County Road Commissioner and a new road was built. Thinking they had avoided the worst impacts, the Ashleys quickly learned that the lights that were meant to light up the rig illuminated their home 24/7. Trucks that serviced the well began using the original road again to haul off oil and byproducts, causing the road to degrade. “We could only go less than 10 miles an hour down this road [to our house] because the road was deeply rutted,” explained Pat. Once fracking began, the disruptions continued with trucks traveling on their road throughout the night and jet engine-like sounds of flares roaring. “When we moved out here, it seemed like there was a certain sense of freedom. And I think we’ve lost that freedom,” reflected Roger.

The Ashleys’ personal experience with oil and gas development in their backyard has taught them to be more skeptical of the impacts of proposed development. Roger and Pat have been working with the Badlands Area Resource Council (BARC) to investigate and mitigate the impact of a proposed large-scale refinery, sited directly outside of Theodore Roosevelt National Park, outside of Belfield. “I think it should be a main concern of a lot of people because it will affect not just those that live right around the refinery but also anybody that goes visit the National Park, which is the number one tourist attraction here in North Dakota,” said Roger.

The traffic that disrupts the rural way of life for the Ashleys would be intensified around the proposed refinery, changing the experience of entering the National Park, a journey that is meant to take people out of the hustle and bustle of everyday life, as well as disrupting the lives of neighbors. The air and sound pollution would not only have a negative impact on the visitors to the park but could also disrupt the wildlife that inhabits the park and the surrounding areas. Theodore Roosevelt National Park sees nearly 700,000 visitors each year, is North Dakota’s only National Park, and is responsible for the majority of tourism revenue to the area.

The refinery, proposed by California-based Meridian Energy Group, is nearly five years behind its original timeline and has only bulldozed the lot during that time. Part of the Ashley’s skepticism is a result of the failure of the neighboring Dickinson Refinery. The refinery, which broke ground in 2013, was 40% over cost once finished and consistently failed to turn a profit. It’s failure  resulted in higher taxes for the residents. Oil companies receive tax breaks when moving into a county on the promise of paying back the tax once they are profitable. If they fail, like the Dickinson Refinery, the residents’ taxes increase to support the infrastructure impacts, such as replacing roads damaged by heavy truck traffic, similar to the Ashley’s narrow hilly road leading to their house. The refinery is currently being retrofitted as a renewable diesel facility, which will process refined soy oil and other organically derived feedstocks.

“William Prentice, the head of Meridian, said that there were two places that they were looking at, but they decided on Belfield because it was right along the rail line. And they were going to use the rail to take the product away but they couldn’t come to an agreement with the railroad. And so that reason went away. And I’m just wondering, where was that other location? Because if it was further from the park, it would be ideal, and we would all go for it,” said Roger. Pat agreed that while neither of them are big fans of refineries and they understand that oil refining is needed, that there is no reason for one to be built within three miles of a National Park. “It’s our park, we all own that park. Everybody, every person in the United States owns a little piece of that park. It’s up to us to protect it. The National Park is limited in its ability to determine what is developed outside of its boundaries. And so it’s up to us,” said Pat.

The Ashleys have a deep respect for the public lands and National Park Service. When they travel, the destination is almost always to one of the National Parks. “In a way, it’s kind of like going to church. A lot of people go to church to fulfill their spiritual innate need, going to a national park, in a way, fulfills my spiritual need,” said Pat. Where the prairie meets the badlands there is an abundance of wildlife; buffalo roam amongst open fields and pronghorn antelope and deer dot the hill sides. There is no direct monetary value on the grazing bison at the edge of the National Grasslands or the golden eagle population that frequents areas near the Ashleys home and because of that, these places frequently come in second to powerful industries.

“I think the community will need to be more aware of what the situation is at the refinery, whether it’s operating properly or not. An agriculture community is more stable, with farming and ranching, they’re going to be around for a while. Now industrialization brings more instability to the community, because you have people coming and going and the [Dickinson] refinery only sold for pennies on the dollar,” said Roger.

The Ashleys have continued to try to relocate the refinery further away from the park. Working with grassroots organizing groups like Dakota Resource Council (DRC) and Badlands Area Resource Council (BARC), the community is informed of the current happenings with the refinery and show up to speak at hearings about potential air quality issues. “We had no clue how to even begin to try to get them to move the refinery elsewhere,” said Pat. “DRC organizers would keep us informed on the permitting process and where those permits are. Now, it’s the lawsuits that they’re keeping us informed on. That’s a lot of work to keep track of. Individuals can’t do it. But as a group, we can keep up to date on where all the lawsuits are and what all the permits were needed. Being a member of BARC is empowering.”

If oil and gas development is inevitable, the Ashleys and many others want to see more thoughtful placement of the infrastructure that is being built, with the resident’s and the visitor’s quality of life being central in the process. “I think about any place I’ve lived, I’ve had some attachment to it and we try to make the best of what we are faced with,” said Roger. “We just think the state could have been more sensitive about how they located wells, especially with the technology that’s available today. That well could have been two miles away, rather than on our doorstep and the refinery could go somewhere that’s not three miles from the National Park.”