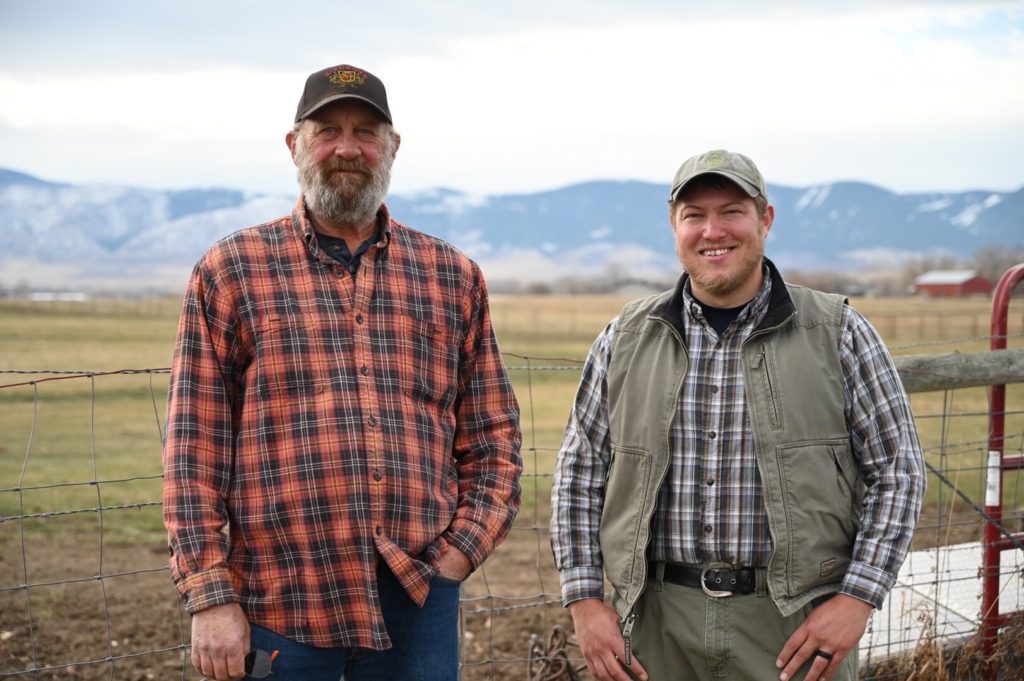 These two Homegrown Stories from a Wyoming producer show how good policy helped bolster a local food movement that continues to unite a community during COVID-19.

Joe Wesnitzer was surrounded by the gentle hum of a heater while working in his greenhouse harvesting fresh lettuce in late October — a rarity in Wyoming. Outside, his herd of Scottish Highland cattle grazed the frosty ground. The sun was just beginning to set but Joe was still hard at work preparing for a farmers’ market the next day. The growing season in Wyoming is notoriously short, and “warm weather” crops like fresh greens this late in the season are scarce. Technology and a supportive, year-round city farmers’ market make it possible for Joe to produce food for his community no matter the season.

Joe Wesnitzer is the owner of Papa Joe’s Produce in Sheridan, Wyoming. Joe is a new farmer selling hydroponically grown greens at Landon’s Greenhouse Farmers Market and a few local stores in Sheridan. Joe planted his first seed in January 2017, and has already seen great success with the hydroponic method.

Hydroponics is a method of growing plants by using mineral nutrient solutions in a water solvent and temperature-controlled greenhouse.

Joe’s setup consists of 220 towers that hold six plants each. He starts his seeds a week before planting, sowing them inside the greenhouse.

Joe harvests nearly 250 plants every week no matter the season. He uses one nutrient tank that recirculates the nutrients and minerals throughout all of the plants.

Hydroponic vertical farming is new to Joe. He learned about this method of growing when he was invited to help his grand-niece and her friend set up a similar system a few years ago.

“That got me interested in doing it myself,” Joe said, reflecting back. “I was in the point in my career where it was time to think of something different to do and that’s when I decided I would experiment with vertical farming.”

Hydroponics is a sustainable, effective method of growing — especially for people who live in areas with short growing seasons and harsh, cold winters.

Joe remembers going to his first farmers’ market in March of 2017, shortly after starting to farm.

“It was in the middle of January when I first planted, and it was 20 degrees below zero,” Joe said. “Come March 2017, I walked into the famers’ market my first time selling and I set up a whole table of fresh lettuce and people’s eyes just widened and people started coming over and saying ‘oh my god, there’s green stuff in here this time of year?’”

Hydroponics create the opportunity to grow produce all year round, despite frigid temperatures. Joe thinks hydroponic growing is the answer to creating new markets locally for foods that are traditionally shipped in or only available during the winter.

“It would benefit the planet greatly to have more locally sourced foods that don’t rely on trucks and ships to make it to market shelves. It also benefits the customer because it’s a lot fresher, tastes better, and the money spent goes right back into the community,” Joe said.

Like most farming operations, the most expensive part is the initial setup. Joe noted that the cost of setup could deter people who don’t have startup money or loans. Joe estimated that his greenhouse, ventilation, heater and fan cost roughly seven to eight thousand dollars. The entire piping and all of the modifications needed to water the plants cost $20,000. Additionally, farmers need access to a market to justify spending that much money on a setup. Some cities and counties don’t have year-round markets that make it easy for producers to sell their products. Joe is in a favorable position, because Sheridan has a year-round market with a steady stream of hungry customers.

Thanks to legislation passed in 2015 and updated in 2017, the local food movement is blossoming in Wyoming. The Wyoming Food Freedom Act enables producers to sell directly to consumers and encourages the expansion of agricultural sales by farmers’ markets, ranches, farms and home-based producers.

The Food Freedom Act lets producers market their products to customers with the disclaimer that the products are not licensed, inspected, or registered with the state. This allows producers to sell their goods as professional or semi-professional food producers instead of a hobbyist.

In his last two years, Joe has been able to turn an equal profit with his produce in winter and summer. He says the only real difference between the seasons for his production is how he heats the greenhouse in the winter and how he cools it in the summer.

One of Joe’s greatest takeaways from his experience farming has been teaching his community. Joe invites local schools to his farm to show students what it means to grow hydroponically.

“It started with inviting my granddaughter’s class and has just expanded into inviting other classes to come out and check it out,” Joe said.

Eventually, Joe wants to take some of his knowledge to Sheridan College and work with interested students and staff to build another greenhouse and do some experimenting on different types of farming systems and aquaponics.

“I’m hoping to help educate some of the community on this,” Joe said. “It’s like any farming job, it doesn’t pay very well, but you will eat very well.”

Driving through Sheridan, Wyoming, in early November, most of the roadside fields seem to be retired for the year. Winter looms around the corner and Wyoming has already seen it’s first snow, browning the remaining crops and closing the growing season. Despite this natural cycle in the outdoor growing season, on the weekends, Sheridan has a unique farmers market that runs throughout the winter where you can find fresh lettuce year round.

Five years ago, when Joe Wesnitzer first started bringing his lettuce to the market throughout the winter, he was met with big eyes and curiosity. “People would just ask, ‘how?’” recalled Joe. Joe uses a system of growing called hydroponics. Hydroponics is a method of growing plants, usually crops, without soil, by using mineral nutrient solutions in an aqueous solvent. Hydroponics is a sustainable, effective method of growing — especially for people who live in areas with short growing seasons and harsh, cold winters.

Joe started Papa Joe’s Produce as a hobby and a way to keep himself engaged in the community with the idea that he would just bring the produce to the farmers market on the weekends. Joe’s greenhouses produce not only a variety of lettuce but kale, basil, cilantro and a variety of other herbs as well. The positive response in the community to his products encouraged Joe to expand and led to him bringing on his son-in-law, Adam Bunker, to help run the greenhouses and help with marketing.

Adam was working in web design with hopes that in retirement he could start growing his own food, when this opportunity came up. “My favorite part is coming in on Monday mornings and seeing how much everything has grown just over the weekend,” said Adam. Now, they have the goal of adding one new greenhouse each year, for the next ten years.

Several months into Adam’s time working with Papa Joe’s, the COVID-19 pandemic began to spread across the United States. As farmers market attendance began to plummet, the two knew that they would need to figure out a solution to the decrease of in-person customers. Adam and Joe worked with other local producers to set up an online farmers’ market through the Papa Joe’s website. The online orders began with eight orders the first week and grew to approximately fifty orders by the fourth week. The online orders ran for 21 weeks until markets began to open again. Working with eight other local producers, the online market offered over 50 different products, ranging from fresh produce to beef, milk, homemade salsas, and coffee. “It wasn’t an easy task between coordinating with all the producers and driving around to make the drop offs,” said Adam, “but we made it work and it was a really successful way to get people our products during a challenging time.”

The Wyoming Food Freedom Act enabled producers to sell directly to consumers and encouraged the expansion of agricultural sales by farmers’ markets, ranches, and farms. The Food Freedom Act lets producers market their products to customers with the disclaimer that the products are not licensed, inspected, or registered with the state. This allows producers to sell their goods as professional or semi-professional food producers instead of hobbyists.

“It’s better for everyone when people are able to support local producers,” said Joe, “It means fewer trucks on the road transporting produce from all over the country, the produce tastes better and is fresher and the money goes directly back into the community.”

Adam and Joe have added a new greenhouse as their consumer base has expanded to restaurants and schools in the area. Their first greenhouse utilized a vertical growing system but their second greenhouse uses a deep water culture system where the plants float on a raft. This has enabled them to grow significantly more plants at a time. As the operation continues to expand, they hope to start growing vegetables, including tomatoes, cucumbers, and peppers, in addition to the leafy greens that they currently produce. Adam and Joe are both passionate about this unique system and have multiple ongoing experiments running at any given time to test and explore the best growing conditions.

Papa Joe’s frequently gets visitors who are captivated by the lush greenery in the greenhouses year round, including some of the local schools. “I think it’s really important for kids to see that there are other opportunities outside of college, more in the trades, to find a fulfilling career,” said Adam.

Growing a Better World from the Ground – Down