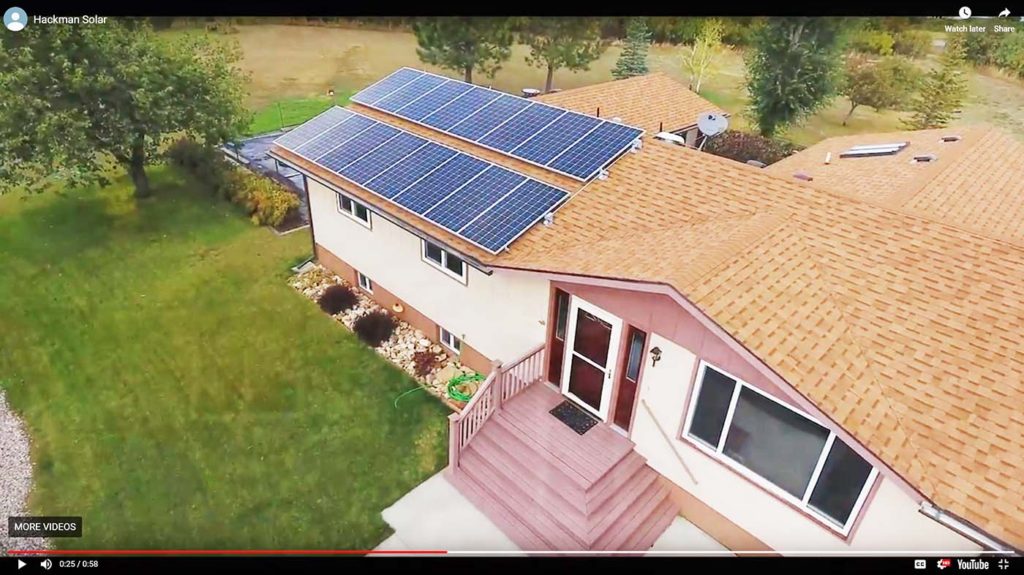 Powder River launched our RENEWyoming campaign in the spring of 2018. The campaign has a couple of distinct, but related goals. The first goal of the campaign is to increase awareness and use of renewable energy in Wyoming and, so far, it has been wildly successful. The second goal is to assist in the push to diversify Wyoming’s economy.

Wyoming ranks 8th in solar potential in the nation, but comes in 43rd for solar jobs per capita. Powder River has recognized our abundant solar resources as an opportunity for our state to continue to be a leader in energy production while diversifying the economy in a meaningful way.

RENEWyoming is a multi-media campaign, utilizing print publications (such as RENEWyoming: Solar Stories from the Cowboy State), live presentations, and video. Since Wyoming does not have a television station, seeing video featuring the state is fairly rare. Having individual Wyoming people featured is rarer still. This makes RENEWyoming’s focus on video storytelling unique.

Wyoming ranks 8th in solar potential in the nation, but comes in 43rd for solar jobs per capita. Powder River has recognized our abundant solar resources as an opportunity for our state to continue to be a leader in energy production while diversifying the economy in a meaningful way.

Our videos are focused on telling the real stories of real people involved in solar energy in Wyoming. We produce short, 1-2 minute, “solar testimonials” with stakeholders in rooftop solar. This includes homeowners, non-profits, banks, businesses, and solar installers.

Letting people who own solar systems speak is a great way to connect people who are interested in solar energy with information they may not have. It gives people who are thinking about installing a chance to see what existing owners’ experiences have been like. It also builds connections between solar owners, and reinforces their reasons for installing solar on their homes or businesses.

There is a myth in Wyoming that solar energy doesn’t make sense for business owners. When Emily, Owner of Tiger Tree Service in Laramie, talks about why her business went solar, those myths are busted. “Not only was it a good environmental choice,” she states at the end of her video, “It was a good bottom-line decision.”

Until recently, solar lending in Wyoming was not available, making it hard for people who didn’t have upfront funding from installing. Solar lending opportunities have begun to open up in the Cowboy State. Having the CEO of Reliant Federal Credit Union (with branches in Casper, Douglas, and Glenrock) say he is excited to talk to members about financing for solar systems in a video is a powerful and fun way to get the word out that solar funding is here.

When we publish print information about why solar energy makes sense for homeowners, a lot of people will read it. When we let homeowners like Hollis Hackman or Lois Dale-Bullock explain why they went solar, however, it creates a more meaningful experience. It is hard, for instance, not to smile at Lois’ joy over no longer paying a utility bill!

When Jamie Loveall, Executive Director of Natrona County Meals on Wheels talks about how their solar system saves them money, people are better able to understand why solar energy makes sense for Wyoming non-profits. As a bonus, we get a view into the daily workings of Meals on Wheels, with its energetic bustle, dedicated staff, and wonderful mission!

Video has also proven to be a great way for solar installers to meet the people of Wyoming. We put out a solar-installer’s directory, a fabulous resource for people interested in solar energy. Seeing the passion of Harmony Solar’s installer, Cody DeBoer or Revolution Solar’s Leo Pueblitz is just a lot more fun!

Different people say things in different ways, so instead of hearing the same language again and again people get the message about solar energy in all kinds of ways, so it doesn’t get old. If people had to read the same person’s writing over and over, it could get old. Through video, the message stays fresh.

There are so many reasons why storytelling is a great fit for solar energy. People who install solar have all kinds of reasons for doing it, and the passion they have about renewable energy carries through in their videos. Not only are their stories being told, they are being told in the owners’ own voices. People who install solar tend to be interesting and enjoyable people to visit with, but a lot of them live in remote places. Video allows more people to experience the joy of the solar community.

Video is a great way to get our message out. Unlike print, video allows viewers to have a relationship with the people they are watching. Seeing people’s faces and hearing their voices has an impact that print can never match. As long as you keep watching, Powder River will keep lifting up the voices of real people who are making solar energy happen in Wyoming.