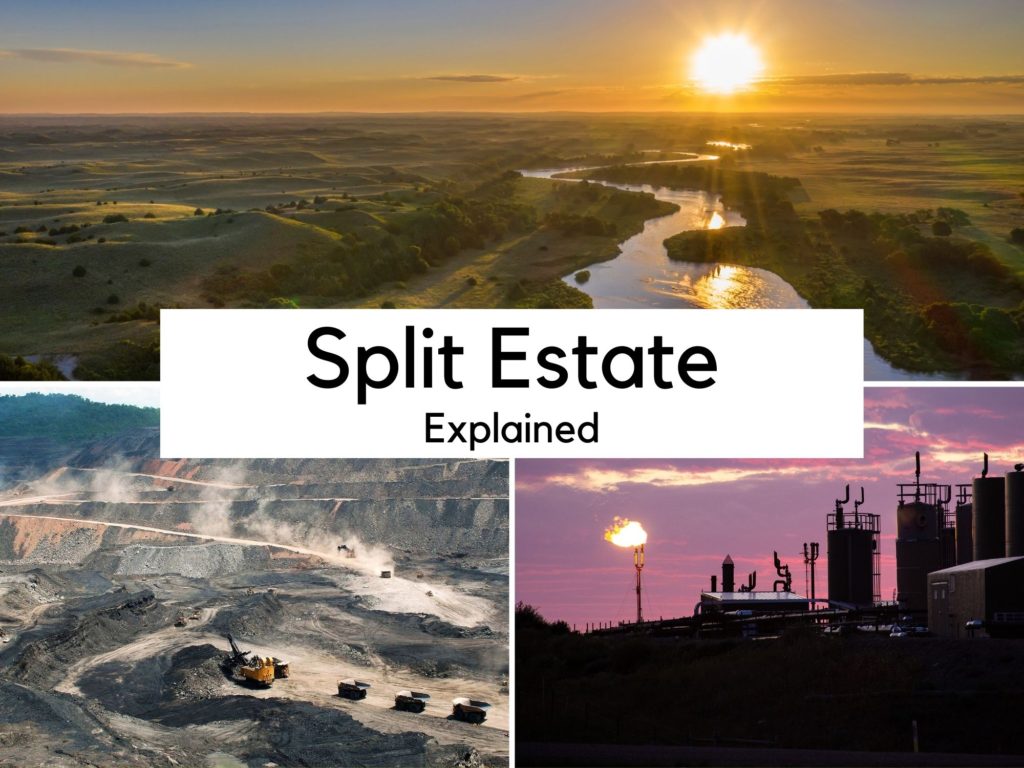 It’s time to reform the laws that impact western homes, farms, and ranches when it comes to fossil fuel development.

Dawn Stein’s home in Greeley, Colorado, is dwarfed by a 32-foot sound wall. Roughly 1,000 feet away, you can glimpse the tops of drill rigs between dust clouds kicked up by trucks and drilling operations. Inside, ominous shakes and booms rattle the whole house, and often leave pictures crooked on the walls. You’re probably wondering how Dawn could have ended up in this situation, with oil and gas drilling happening literally on her doorstep. It might sound wild, but people sometimes have no control over whether energy development happens next door, or even on the land they own. The culprit is a situation called “split estate.”

A “split estate” is where separate parties own the rights to the surface of a parcel of land and to the minerals beneath that parcel of land. In western states, the most common instance of split estate is where the surface rights are privately owned and the federal government owns the mineral rights. This is the kind of split estate we’ll be exploring in this blog post, focusing on coal and oil and gas. The general (common law) rule in the case of a split estate is that the mineral estate is “dominant.” This means that the owner of the surface estate cannot prohibit the owner of the mineral estate from accessing and developing the minerals. Surface owners are often at the mercy of companies looking to develop the minerals below them, with very little input on when, where, and how development happens.

In the West, the phenomenon of private surface ownership and federal mineral ownership stems from the early twentieth century—a century after the major westward expansion of white settlers into the homelands of Native people began—Congress passed a new law called the Stock Raising Homestead Act of 1916 (SRHA). The law allowed a settler to claim 640 acres of non-irrigable land that had been designated by the Secretary of the Interior as stock-raising land. Unlike other Homestead Acts, Congress reserved to the federal government the rights to any minerals beneath land claimed under the SRHA, allowing settlers to gain title to only the surface. The purpose of reserving western minerals under the SRHA was to allow the government a hand in promoting mining of the vast coal reserves found beneath the northern Great Plains. Similar split estate arrangements through the broad form deed had helped develop a massive coal mining industry in the eastern United States — especially central Appalachia — during the nineteenth century.

According to estimates from the Bureau of Land Management (BLM), the primary federal agency that manages public minerals, the federal government today holds roughly 57.2 million acres of mineral rights under privately owned surface estate, the vast majority of it in western states. The development of these minerals has given rise to serious conflicts between surface owners and coal, oil, and gas companies. In addition, the impacts and the scale of energy development have greatly changed since the SRHA was passed into law. For example, oil and gas technologies such as fracking now make it possible to reach mineral deposits that were previously inaccessible, with even greater impacts to the surface, air, water and health of people who live nearby. For both the energy industry and landowners, we are talking about a totally different landscape, both figuratively and literally.

“The kind of oil boom that I was familiar with was an oil boom of vertical bore wells spaced every 160 acres and most of them few and far between because they were going for particular salt domes or coral reefs. So I was thinking along those terms. I had no idea that fracking and directional drilling had changed all that. So I signed a bunch of oil leases without dreaming they would cause the impacts that they cause.”

Federal coal can only be strip mined with the consent of split estate surface owners who live, farm, or ranch above the coal tract. Before the BLM can give final approval for the lease of a tract of federal coal, the mining company must provide the agency with written authorization from the surface owner(s), consenting to the lease of federal coal beneath their lands (this is not the case for underground or longwall mining). The purpose is to afford surface owners legal protection in the federal coal leasing process, and is a protection that was created when the landmark Surface Mining Control and Reclamation Act was passed in 1977.
This protection has also not historically extended to swaps and exchanges of federal coal. BLM can exchange federal land and coal where it determines that the public interest will be well-served by the exchange. Once ownership of the federal minerals passed to a private entity, the right of surface owners to consent to coal mining would be extinguished. This has led to numerous surface owners losing the right to consent to leasing and mining. On January 19, 2017, the BLM changed its policy to close this loophole in an Instruction Memorandum that expired on September 30, 2020. Under it, federal coal could not be exchanged without surface owner consent, preserving the right and aligning agency policy with the intent of federal law. Had that policy been in place years ago, it would have saved ranch operations like Steve Charter’s:

“I’m a third-generation Montana cattle rancher and the fourth and fifth generation also live on the ranch. I live in coal country and have lived under the threat of coal mining all my life. Our ranch will soon be undermined by a huge longwall mine that will cause disruption to our ranch operations including major subsidence and possibly damage to our critical water supplies. The coal under my ranch in the Bull Mountains is a good example of how the federal government has either outright given coal away or sold or traded it for very little. Some of the places this might open to strip mining include the springs where I got married and the cabin where we took our kids during the summer. My family’s ashes are scattered there. These lands include Native American cultural sites, elk habitat, and pastures where our community has ranched for generations — land that we hope to keep in agriculture for future generations. In the process, they’ve taken significant property rights away from Bull Mountain ranchers.

Unlike coal, surface owners over federal oil and gas don’t have the right to veto leasing. Under the SRHA, an oil-and-gas company that has leased federal oil and/or gas minerals and is seeking to drill must make a good-faith effort to notify the surface owner before entering their land to conduct surveys or stake a well location. Companies are also required to make a good-faith effort to negotiate a surface use agreement with the surface owner. If negotiations are not successful, then the company must post a separate bond as part of the approval of an Application for a Permit to Drill. The bond is designed to protect the surface owner from reasonable and foreseeable loss of crops and damage to improvements on the land and must be at least $1,000. If the surface owner objects to the amount of the bond, then the BLM will review and either confirm the previously established bond amount or set a new amount. It is important to note that BLM’s limitation of damage to crops and improvements is very restrictive compared to coal and oil and gas split estate laws that regulate private and state leases. This limitation explains why the bond amounts are so low and why landowners have so little leverage in these situations.

This scenario is commonly referred to as “bonding on,” and it puts landowners in a tough position. It gives oil and gas companies leverage over landowners, who often find they have no legal right to prevent wells from being drilled on their land. Landowners often sign surface use agreements so they are able to have some say in the development that will happen on their land. Karen and LJ Turner of Gillette, Wyoming, have been pressured by companies seeking to extract oil and gas beneath their land, explaining “They’re threatening that we either make peace with them and accept their agreement for surface access to our ranch, or they’ll just sue and condemn their way in. So, you try to make the best deal you can, but you really can’t keep them out, because you don’t own the minerals.”

“The ‘bond’ BLM required for industry to come onto my ranch was $2,176. This money was not and will not be paid to me or any other landowner who is forced into this position. The landowner must sue the BLM for damages and the legal fees would be several multiples of the bond. Do you think two thousand dollars was adequate to compensate for my losses or cover me against the damages caused by drilling 11 wells, bulldozing miles of roads, installing miles of “utility corridors”, and constructing five off-channel water disposal pits of approximately three acres each? An engineer I retained estimated reclamation costs to be in excess of $3 to $4 million dollars.”

The rationale behind the SRHA has created a massive power inequity and several challenges for surface owners, all stemming from the severing of ownership of surface and minerals, and the dominance of the mineral estate over the surface estate. Neither federal nor state laws do enough to protect split estate landowners. Although federal law does offer some protections for split estate landowners whose land overlies federal coal and hardrock minerals, it offers nearly zero protections for landowners whose land is above federal oil, gas, and coal bed methane deposits leased for development.

WORC supports federal legislation that makes critical updates to current law, empowering farmers, ranchers and other landowners to have a say in the course of oil and gas development on their land and ensure compensation for damages. This includes: