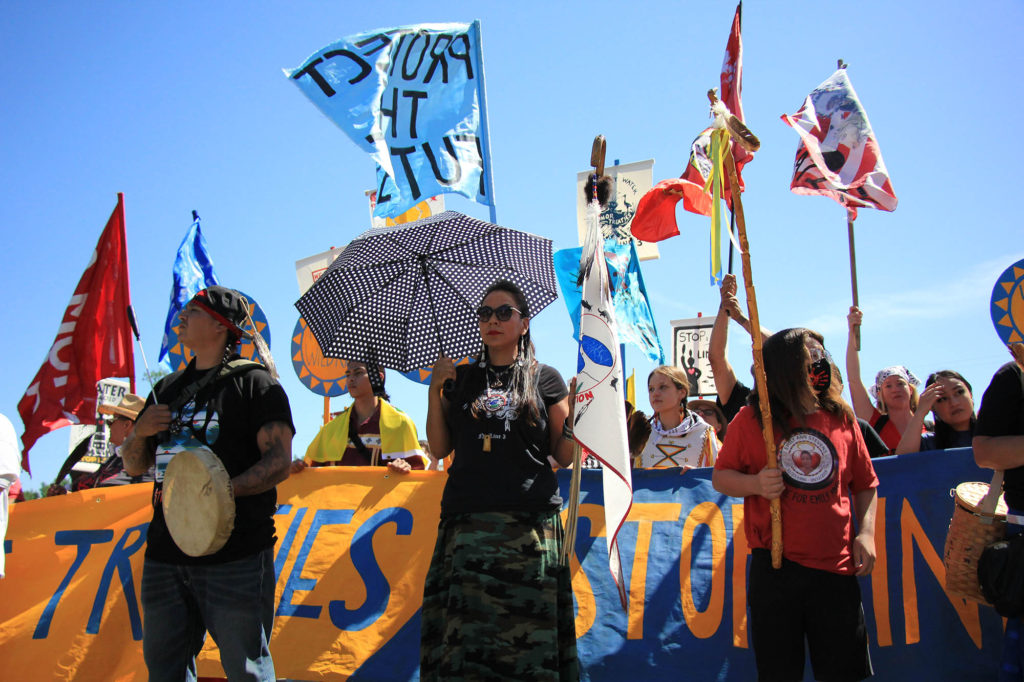 Above: Thousands of Water Protectors showed up to support the Anishinaabe treaty rights that require that Minnesota’s water be kept pristine for healthy fish populations and wild rice crops that the Anishinaabe rely on as their foodways.

WORC’s communications team was on the ground during the Treaty People Gathering as Indigenous leaders spoke out for treaty rights and protecting Anishinaabe waters.

On June 7th, 2021, Water Protectors marched from a campground at the headwaters of the Mississippi River to a bridge that crosses the sacred waters at a spot just ten feet wide. The march was part of the Treaty People Gathering, where thousands of Indigenous leaders and non-Indigenous allies came together from around the United States to stand up against the building of the Line 3 tar-sands pipeline through Minnesota.

The Gathering marked the start of a summer of protests against Enbridge Energy’s plans to route Line 3 through northern Minnesota. If the project is completed, the route will cross more than 200 bodies of water and 75 miles of wetlands in this region including two crossings of the Mississippi River, breaching Anishinaabe treaty territory.

80% of the Line 3 pipeline corridor in Minnesota has already been constructed and is scheduled to be completed by the end of 2021, according to Enbridge Energy. The Canadian pipeline company plans to transport nearly one million barrels of tar sands crude per day from Alberta, Canada, to Superior, Wisconsin.

Tar sands contain a petroleum-based substance called bitumen that is combined with sand, rock, and dirt. Extracting this mixture requires either an open-pit mining operation or steam extraction, which is when a well is drilled to pump steam into the sand to heat the bitumen so it can flow more easily. Both of these processes are extremely energy-intensive. According to the Union of Concerned Scientists, one gallon of gasoline made from tar sands emits approximately 15% more carbon dioxide than non-tar sands-based gasoline when measured with extraction and transport.

The transportation of tar sands is another major concern because pipelines in the United States have a history of leaking, even when they’re newly constructed. Since the Keystone tar sands pipeline was completed in 2010, it’s spilled over 20 times releasing over 800,000 gallons of diluted bitumen into wetlands and other sensitive areas throughout the northern United States. Bitumen sinks in water, rather than floats, making it much harder to clean up. Spills into wetlands are often impossible to reclaim, leading to total loss of that habitat.

If Enbridge’s original Line 3 is any indicator, we can expect more spills. One of the largest inland oil spills in U.S. history was a 1.7 million gallon oil spill near Grand Rapids, Minn. Line 3’s new route includes hundreds of water crossing endangering North America’s largest watershed draining 40% of the continent’s fresh water plus hundreds of miles of streams, lakes and wetlands that the Anishinaabe people have lived on and harvested food from for centuries.

The 1855 Treaty between the Chippewa of the Mississippi and the United States government protects the resources used by Anishinaabe peoples, including medicines, fish, animals, and manoomin (wild rice). These resources can be used in and outside of Anishinaabe reservation borders.

Manoomin is a particularly integral part of daily Anishinaabe life. It is used in ceremonies and is often the first solid food given to babies, according to the Stop Line 3 website. The environmental impact statement for the Line 3 route shows that the pipeline would impact 17 wild rice water bodies, putting this sacred food source at risk.

On August 4, an action was filed by the White Earth Band of Ojibwe, tribal members, and manoomin itself against the Minnesota Department of Natural Resources to enforce the rights of nature.

“This action is about upholding manoomin’s right to exist and flourish as established by tribal law, and about Minnesota’s legal obligations pursuant to the Treaties signed with the Chippewa. All we are demanding is that those Treaties be honored, and manoomin recognized as having the sacred status as recognized by tribal law,” said the plaintiffs’ lawyer Frank Bibeau in a press release from the White Earth Reservation. The action is one of the first of its kind to be introduced in a tribal court.

Protecting treaty agreements was a major focus of the Treaty People Gathering in early June. Water Protectors created a chalk mural calling for Enbridge Energy and the Biden Administration to stop Line 3 and honor the 1855 treaty. Others participated in direct actions like building an occupying camp at Enbridge’s drilling platform and performing ceremonies. All of the actions that occurred were nonviolent yet were met with an aggressive response from the Hubbard County Sheriff’s Department, who weaponized a Department of Justice helicopter to blow debris into the eyes of the demonstrators.

During the week of the Treaty People Gathering, over 100 people submitted to arrest. Since direct actions began at the beginning of 2021, more than 600 people have been arrested or issued citations.

In reflecting on seeing police encounters at other pipeline demonstrations like Standing Rock, organizer Gaagigeyaashiik-Dawn Goodwin of the Minnesota Chippewa Tribe and enrolled member of the White Earth Nation told WORC’s communications team that many people were shown the exploitative reality of oil companies wanting to build in sacred lands. “Because of Standing Rock, many, many people were awakened and now know that we all need water to survive. That has continued to awaken many and has carried over through those years and to this moment here today.”

WORC’s communications team was on the ground, supporting Indigenous allies. The team provided media support, wrote an article for Esperanza Project featuring Indigenous leaders, and shared the images and video collected with organizations like Honor the Earth, Indigenous Environmental Network, Rise Coalition, and others to get the word out during the Gathering.

As protests against the pipeline continue beyond the summer, WORC will continue to support our Indigenous allies to defend their rights and stop Line 3. Threats from bad corporate and political actors don’t just impact one state, they affect our whole region.

My Home, the Ft. Berthold Reservation, is a Web of Oil and Gas Pipelines. Here’s Why I Oppose the Keystone XL Pipeline