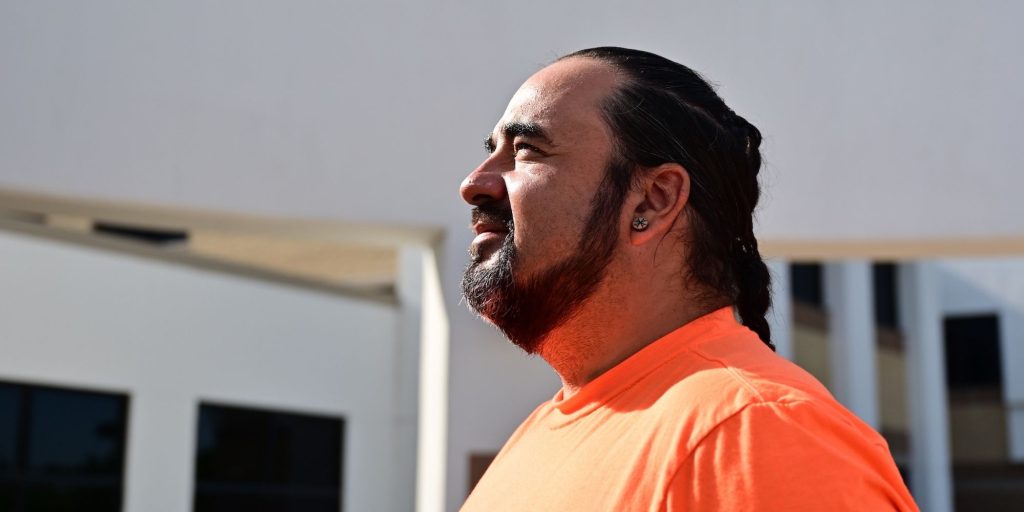 Above: Wes Davis stands in front of Turtle Mountain Community College which runs almost exclusively on clean, renewable energy. It may be a blueprint for creating energy sovereignty for tribes.

This story originally appeared in Homegrown Stories as part of the Homegrown Prosperity series.

The Turtle Mountain Community College sits in the heart of Turtle Mountain Reservation just a few miles south of the Canadian border. Each morning, Wes Davis, the facilities manager scans a chart he refers to as “the heartbeat of the college.” The sensors that have been installed in the school track when doors open and close from people entering and leaving the building but also the heat loss and gains of each room within the building. Heat ebbs and flows with all of the activity within the college and on this chart it looks a lot like a heart monitor, spiking up and down throughout the day. With this information, Wes controls when to accept heat loss in the building and even in specific rooms. He is also able to see which heat pumps might need repairs or attention. Through this smart technology and these sensors, Wes has been able to fine tune the GeoThermal energy that the college was built on, along with a 660kw wind generator, to be one of the most sustainable colleges in the nation. Wes goes back several years in the data and points out a flat line in the heartbeat of the school’s mechanical system, this indicates hours where the 170 thousand square foot campus was running below the grid and Wes realized he had something really special in the world of sustainability. “We not only have the geothermal and wind technology but we also have the technology to control them to the max efficiency that we can use them,” said Wes.

People living on Turtle Mountain pay two to three times the average amount per kilowatt-hour for energy than people on the other side of the reservation border, living in less rural areas. In the past, rural electrical co-ops have not invited Indigenous  people into conversations about joining and being a part of the co-op movement. “Co-ops were a part of the colonization of our people, because we, of course, heated our homes with wood, we cooked with wood, we lit our homes with wood and then all of a sudden were put on a reservation, and we were forced to buy power,” explained Wes. Colonialism imposed a worldview on Indigenous people that not only impacted how they sustain themselves but also required infrastructure that wasn’t accessible for them to move towards green and renewable energies. “There’s some pretty tough conversations that have been going on in the past couple of years,” said Wes. “Tribes that are seeking self determination, want to be at the table of CO Ops. We understand how they help and how that affects the quality of life of our people. We need to be able to understand how to develop our power and energy and how to get it to our communities. I feel we are going to be coming together soon to work with each other to possibly learn from each other.”

Wes is Anishinaabe and was born and raised on the Turtle Mountain Reservation. He has seen a lot change since he left home at 17 years old to pursue an education in Heating, Ventilation, and Air Conditioning (HVAC). After several years away learning the trade and learning about sustainable systems, Turtle Mountain Community College recruited Wes to return home to be the facilities manager for the college. Wes says that the sustainability aspect really hit him one Christmas Eve, when he was working 40 hours a week and his power was cut off in his home. He couldn’t afford to keep his electricity on. He began asking around with his friends what they were paying per month for energy and $700 was the answer he was getting back from several people in the community, keeping in mind these homes on average are 1,200 square foot or less. “I want our community to be healthier and have a better quality of life and not have to be taxed all winter long just to keep their homes warm,” explained Wes.

The history of the Anishinaabe people plays an important role in Wes’s work centering around sustainability and environmentalism. “I want to make sure that the teachings that we have known for thousands of years, are taken into consideration when we’re doing sustainable living. Because keep in mind, before, we always knew that the sun gave us power, it gave us plants, trees, it heats the ground, and it’s an amazing gift from the Creator,” said Wes. Turtle Mountain has changed drastically over the years according to Wes. There has been a revitalization in recent years that has been connecting Indigenous people with their culture, a connection that was disrupted by colonialism and genocide. “It’s amazing, because everybody takes pride in being who we are. It’s not always easy to be Indigenous, especially in the world we live in right now. But society’s taking us in, and there’s all kinds of allies and people who are not native, who believe in what we believe in, and we have a mutual respect, and we have integrity for each other,” said Wes.

As the facilities manager, Wes led an effort to lower the energy bill of the college by 300%. It went from $600,000/year to less than $200,000/year. He did this through controlling the 256 geothermal heating and cooling pumps in the school, each equipped with their own sensor. Wes has used those savings in a variety of ways from investing in energy infrastructure to improving the quality of life for the students.

Some of the money saved from the energy bill has been given back to the community and the school by supporting local artists and bringing more culture into the college. The hallways of Turtle Mountain Community College show the history of the Anishinabe people. A display case holds an assortment of artwork, from artifacts to local indigenous artists to student recreations of traditional crafts.

Wes does not only want the college to be sustainable, he wants the college to teach sustainability to the community and inspire community members to build homes that are also sustainable. Creating a vocational HVAC and solar energy program at the college is a step towards the vision for an energy-sovereign Tribal Nation on Turtle Mountain. Energy sovereignty would give the Turtle Mountain Reservation community more economic freedom as well as strengthen tribal sovereignty. “It’s part of the self determination of the tribe, because we have always been dependent on rural co-ops for our power, which is a big deal because of course, we use that power for heating, lighting, water, everything that is a natural resource to our lives and our quality of life.” said Wes.

By reclaiming the use and distribution of energy on their own terms, tribal members can stop overpaying for their energy and keep resources within their communities. Wes envisions a community where students of the college will implement sustainable energy systems on the reservation and free the community members from the burden of high energy costs. This redistribution is already happening on the campus with the savings that Wes has used for new equipment and resources for the students to improve their quality of life. The hope is to see those changes across the reservation and eventually across the nation through leading by example.

The future goal for the school involves a vocational HVAC program and solar and renewable energy schooling, explained Wes. “If we can build better infrastructure, and develop our communities better through sustainability efforts, we can then create economies by training these people to maintain and upkeep these buildings that have the state of the art mechanical systems in it. Now that we have institutions like this, it’s going to change who we are as a nation, along with how we practice our culture and language. ”

Winning a Clean Energy Recovery in the West