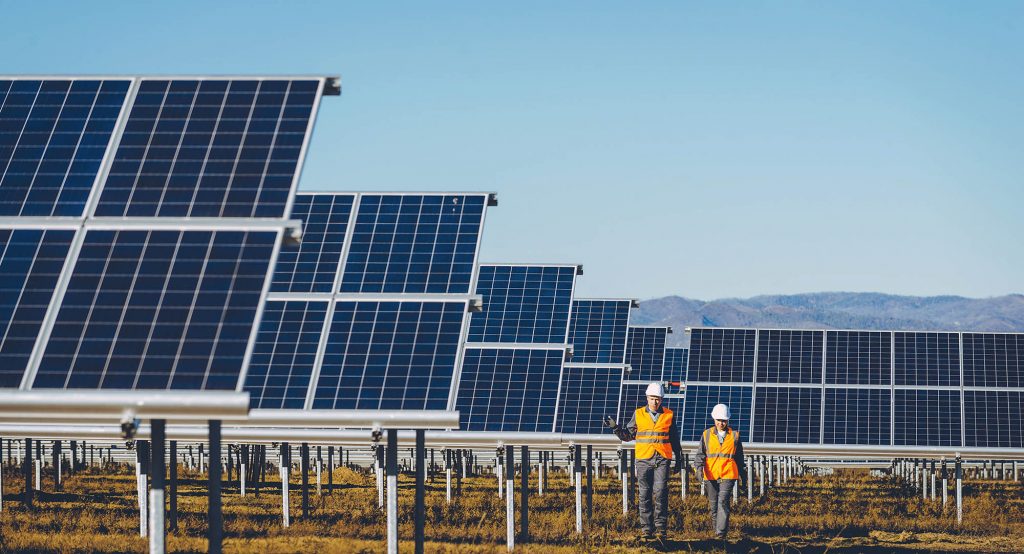 The Solar Investment Tax Credit (ITC) has been critical to kick-starting a clean energy industry that’s cheaper, cleaner, and provides more jobs. So why is it set to expire?

Renewable energy growth in the US has been remarkable over the last two decades, but changes in tax incentives could throw the brakes on this tremendous momentum. Investment and production tax credits have been some of the only federal mechanisms to support the burgeoning solar and wind industry. These credits are especially critical for the renewable energy industries located in the interior West where there are few state policies supportive to clean energy developments. In late 2019, Congress had the opportunity to extend the tax credit for solar and expand it to include storage developments, but the proposed deal fell apart at the last minute. Concerned lawmakers are working on finding other legislative vehicles for extending and expanding these tax credits, and it’s important that the public supports these efforts.

The Solar Investment Tax Credit (ITC) was passed in 2005 as part of the Energy Policy Act of 2005 and applied to projects initiated in 2006. The tax credit was renewed in 2015, and has been credited as a major reason the solar industry has grown over 10,000% in the last 15 years. In fact, the solar industry has seen an average annual growth of 52% since 2006. Industry advocates report that the ITC has helped spur $140 billion in private investment, creating over 200,000 jobs. The ITC is widely considered one of the most successful clean energy policies.

The ITC is a dollar-for-dollar reduction (based on the solar investment amount) in federal income taxes that a person or business owes the IRS. The tax credit applies for the year that the solar project construction begins. If a homeowner puts solar panels on their home, they can then claim the tax credit against their personal income taxes (under Section 25D). If a commercial or utility entity invests in a solar energy project, then the business that installs, develops, or finances the project can claim the tax credit (under Section 48).

Under the current terms, the ITC has a scheduled phase out and there will be a step down of the tax benefit between 2020 and 2022.  This year, the credit dropped from the original 30% tax credit to 26%. It’s scheduled to drop to 22% in 2021 and then to 0% for residential installations in 2022 (commercial and utility-scale installations will still receive a 10% tax credit).

Why is solar so economically promising?

In terms of economic benefit, solar seems to provide the biggest bang for the buck. In 2018, almost 335,000 workers were employed by the solar industry, far outpacing fossil fuel workers (211,000) and wind workers (111,000). The potential job creation benefits of solar are truly impressive when one considers solar’s relatively modest contribution to electricity generation currently. Additionally, distributed solar is one of the most beneficial energy development options for local economies in terms of lower electricity bills and local wages.

Why is the ITC still needed if the solar industry is so strong?

The solar industry’s boom since 2006 is quite impressive, leading some to conclude that the solar industry does not need any more policy incentives or help from the government. However, there are several reasons that the ITC is still needed.

Renewables still provide a fraction of the energy as fossil fuels.

While renewable industries’ growth has been strong, it is still a comparatively small part of the US’ energy mix. This is especially true for solar energy. In 2018, renewables produced 17.6% of the US electricity generation at a record 742 million megawatt hours (MWh).  This is a big jump from the 382 million MWh produced by renewables just ten years earlier and the vast majority of this growth is thanks to a boom in wind and solar. In 2018, wind accounted for 275 MWh generated and solar accounted for 96 million MWh generated.

While this increase is certainly cause for optimism, renewables still have a long way to go and solar’s upward trajectory is not guaranteed. According to the US Energy Information Administration, 2020 will see coal generation continuing to drop precipitously and natural gas starting to level off, but renewables will only produce around 15% of the country’s electricity. This is impressive growth, but it’s only a fraction of natural gas. It also does not take into account fossil fuels used for transportation.

Renewables are already cost-competitive with fossil fuels, but prices could drop even further with some government help.

The federal government should also be interested in helping Americans access the lowest-cost energy possible and in the near future, that will be clean energy. Remarkably, renewable energy is now cost competitive with fossil fuel electricity. The International Renewable Energy Agency (IRENA) predicted that renewables would be consistently cheaper than power generated by oil, coal, and gas-fired power plants by 2020, and these predictions seem to be coming true. And while prices vary widely, renewable energy rates are set to drop even further globally without financial assistance.  New solar projects in some countries have a levelized cost of $0.03/kWh, and in the US, utility-scale wind is down to $0.06/kWh. Wind has dropped to $0.02/kWh in some parts of the country. As a comparison, electricity from fossil fuels ranges between $0.05/kWh and $0.15/kWh.  So renewable energy could soon become the cheapest form of energy in the US, but the utility industry and transmission systems are structured in such a way that renewable projects have a hard time accessing the grid and getting project funding — even though it would ultimately provide the lowest cost energy to households in the long-term. With some policy incentives, like an extension of solar ITC, the federal government could help ensure Americans have access to the lowest-cost form of energy in the future.

There’s also the glaring disparity of subsidies provided to renewables versus fossil fuels. Despite all the promise and additional benefits of solar, wind, and battery storage, renewables still receive many fewer subsidies than fossil fuels. In the US, the fossil fuel industry benefits from $7.4 billion in yearly, permanent tax breaks compared to approximately $1 billion for renewables. Extending and expanding the renewable energy tax credits and reducing fossil fuel subsidies are common-sense measures Congress could take to level the playing field.

The renewable boom is uneven across the US.

The ramp down of the ITC is a big deal for the renewable energy industry, especially in Western states which largely lack strong policy support for renewables. Cost per kWh of renewables vary widely by state, and this is largely attributable to state or regional-level policies that either hinder or help renewables. State policies have a tremendous impact on whether or not the solar industry can thrive, especially because there is no unified national energy strategy.  This means that solar and wind companies in states with few renewable energy incentives and mandates depend greatly on federal incentives, like the Solar ITC.

Thus, while the Solar ITC is critical for the entire US, the solar industry in renewable-unfriendly states will be most impacted by this tax credit expiration.

Allowing the ITC to expire now could hinder a smooth transition away from subsidies.

The ultimate goal of an energy subsidy is that it will bolster the industry enough so that it can thrive without government assistance. At this point in the solar industry’s growth, allowing the tax credit to expire now would likely cause a market-disrupting downturn. This is because solar developments require private investment, and investors look for certainty — this is heavily influenced by the policy environment. Fortunately, the Solar ITC provided that certainty and investors backed many projects with the expectation that they would be repaid. This financial certainty is critical because the solar industry still faces many hurdles that have nothing to do with technological viability; these hurdles include barriers to grid access, unfair net metering policies, and local zoning restrictions. The assurance provided by the ITC helped investors to overcome worries about the uneven and uncertain regulatory environment for renewables (especially solar).

Thus many analysts predict that the expiration of the ITC will hit the industry at a very vulnerable time and result in turmoil, potentially resulting in a boom-and-bust cycle. Additionally, such a market downturn could result in political backlash and turn the political winds again renewables, despite their overwhelming popularity across all parties.

Overall, while the solar industry is strong, there are still many regulatory hurdles to overcome and investments in future developments are thus not guaranteed. Pulling the rug out from the solar industry at this point would not allow the industry to thrive, but would instead hobble it indefinitely.

Wind is a bit different from the solar industry at this point. The Production Tax Credit for wind will be running out in 2020 and many in the wind industry are fine with that; analysts feel that there is a glide path for a subsidy-free on-shore wind industry.  The energy tax deal reached at the end of 2019 also provided an extension of ITCs for off-shore wind as well.  There is still a need to ensure wind can access the grid, that wind pays its fair share to local communities, and that wind is sited appropriately. But none of these issues are impacted by an investment tax credit.

Most renewable energy advocates feel that the investment tax credit should be extended to storage technology to help even out the grid and allow seamless integration of renewables. That’s why the end of the year deal included an investment tax credit for storage and it’s a logical companion to extending the Solar ITC.

The energy storage industry is primed to boom — and it’s more than just lithium batteries. Innovative and viable storage technologies include flywheels, pumped hydro, thermal storage, and compressed air. Despite their promise, these technologies have largely been excluded for the federal investment tax credits, nor are there significant subsidies or other tax breaks for storage developments. To be clear, some storage has been eligible for the ITC when paired with a solar system and if the storage component was considered part of the overall project’s cost. However, this one opportunity for storage will evaporate when the solar ITC expires. Moreover, though, storage developments deserve the same support from the federal government as other clean energy technologies since they are critical for scaling up a renewable energy infrastructure.

Opportunities to Extend and Expand the ITC in 2020

Some congressional leaders have signaled that they are looking for new opportunities to extend and expand the renewable investment tax credits in 2020. But our representatives need to hear from their constituents and know that there is widespread support for extending the Solar Investment Tax Credit for another 5 years, and providing an investment tax credit for renewable storage technology.